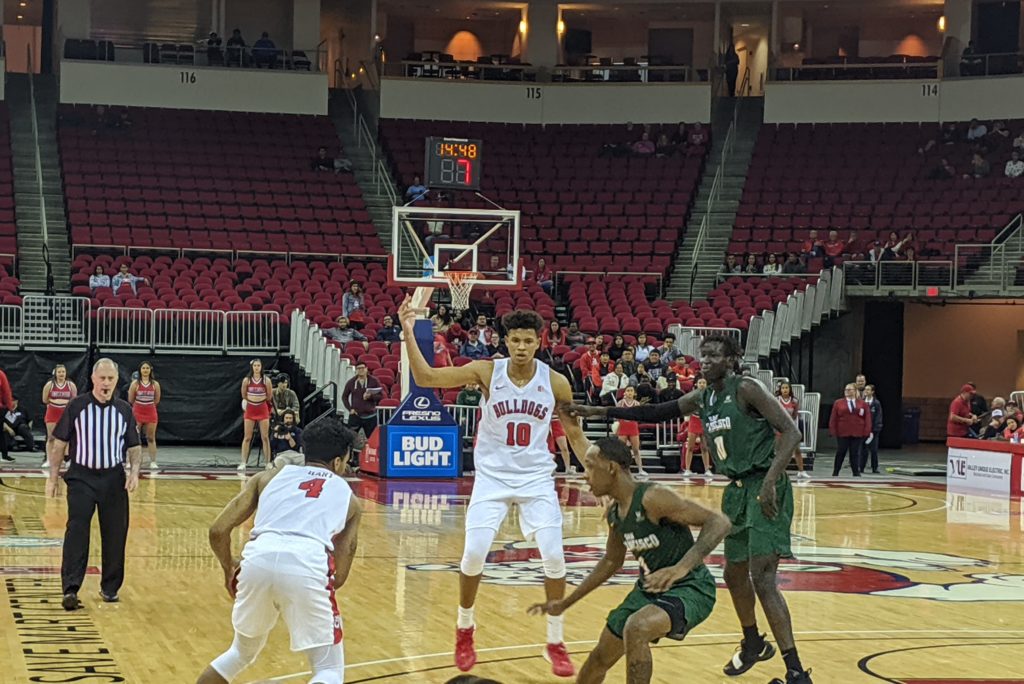 Although the Bulldogs led by 8 with 1:44 left in the game, they made crucial mistakes which allowed the University of San Francisco to storm back and win 71-69.

“Bottom line is we had a chance to win it tonight and we didn’t get it done,” Fresno State head coach Justin Hutson said.

The ‘Dogs committed multiple fouls, missed shots and had 3 turnovers in the final two minutes – the most costly of which came with 13 seconds remaining when the score was tied at 69.

“He’ll continue to grow and get better,” Hutson said. “He has some up times and bad times, but he’s tough down there. And he can shoot the outside shot when he needs [to be] a little bit more picky with the ones he shoots, and he’s getting better at that. So it gives you a better percentage.

“He did a good job tonight, something I would expect from O.”

San Francisco took a 12-2 lead to start the game, but Robinson quickly found his rhythm to keep the game within reach.

The ‘Dogs improved as the half progressed, pulling within one at halftime. They came out of the locker room firing and held the lead for all but 2:06 in the second half.

Shabazz finished as the Dons’ leading scorer with 17 points. He was sharp from beyond the arc, making 4-5 three-point attempts.

Guards New Williams and Mustafa Lawrence each finished with 12 points and were the only other Bulldogs to score double digits.

Forward Nate Grimes struggled for most of the game on the offensive end – going 3-12 for 8 points – but he led Fresno State with 9 rebounds and four blocks.

“I was happy for the most part with our defense,” Hutson said. I think we played it for a period of time against a really good team that can score in different ways. It helped to be home. I was happy that we were helping each other a little bit more.”

Fresno State drops to 4-8 and will play UC Riverside (8-5) on Saturday at the Save Mart Center.