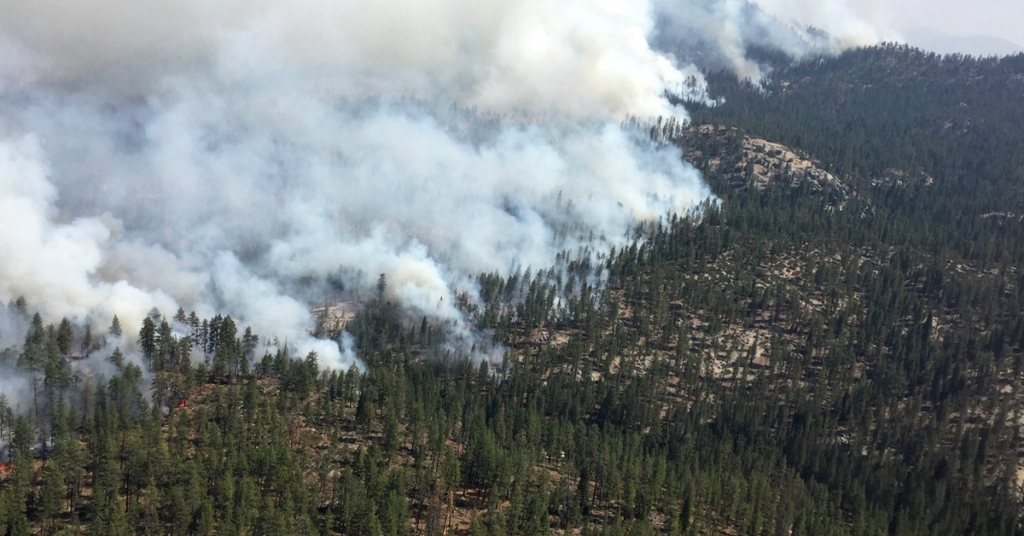 While the fire is slowly growing, firefighters are continuing to make progress with containment, pushing the total to 61%.

There are currently 1,838 total personnel on the ground fighting the SQF Complex Fire.

9/29/20, 9:35 a.m.: Firefighters continued to see success in pushing back the SQF Complex Fire as they report Tuesday morning that the containment is up to 58%.

The good news on the containment front comes as the fire is seemingly slowing down, only gaining about 600 acres to push the total to 150,800 acres.

The total personnel on the scene is down to 1,987 individuals.

The wildfire in the Sequoia National Forest is only grew by 20 acres overnight, now sitting at 150,286 acres.

There are currently 2,249 individuals fighting the blaze.

9/27/20, 8:59 p.m.: Firefighters battling the SQF Complex fire within the Sequoia National Forest have greatly pushed back the blaze, achieving 49 percent containment – up 13 percent since Friday.

Containment continues to slowly rise, hitting 36%, while the number of total personnel on hand grew substantially to 1,763 fire fighters.

Officials expect to have the fire fully contained by Oct. 10.

As the fire saw minimal growth, firefighters were able to gain some ground and push the containment up to 35%.

The total personnel currently fighting the SQF Complex is up to 1,521.

Officials report that the total personnel on the scene has risen to 1,458 people.

The U.S. Forest Service has not reported an update to structure damage.

9/22/20, 10:43 a.m.: Following Monday’s announcement that the SQF Complex Fire has been 33% contained, officials report that the fire has swelled to 141,600 acres while staying one-third contained.

There are now 184 structures reported destroyed, and 15 individuals have been injured.

SQF Complex swells to 137k acres, containment up to 33%

In total, 1,440 firefighters and support personnel are on-the-ground battling in the SQF Complex.

Despite the growth of the fire, officials report Thursday morning that the containment remains at 12%.

The closure comes after Sequoia National Park closed on Sep. 15. Park officials say they expect Kings Canyon to remain closed at least through the weekend and will reopen when conditions improve.

Officials announce that they will conduct structure damage assessments when it is safe to enter the area impacted by the fire.

Fire officials will contact homeowners once the assessments are completed, and homeowners need to complete a form to provide contact information.

Fire officials report that the SQF Fire is still contained at 12%, and they expect to have it fully contained by Sep. 30.

The total personnel fighting the fire is 1,001, officials report.

Thus far, 12 percent of the combined fires have been contained by an active duty crew of 819 firefighters. 104 structures have been destroyed since the fires ignited in late August.

The Interior Department issued a full closure of Sequoia National Park due to the spread of the Castle Fire.

Evacuation orders for Three Rivers were issued Monday afternoon by Tulare County Sheriff Mike Boudreaux. The orders cover the areas of Three Rivers south and east from Highway 198, east to south of the Fork Campground, which includes South Fork Drive, Horn, Cahoon Mountain and roads adjacent to the area.