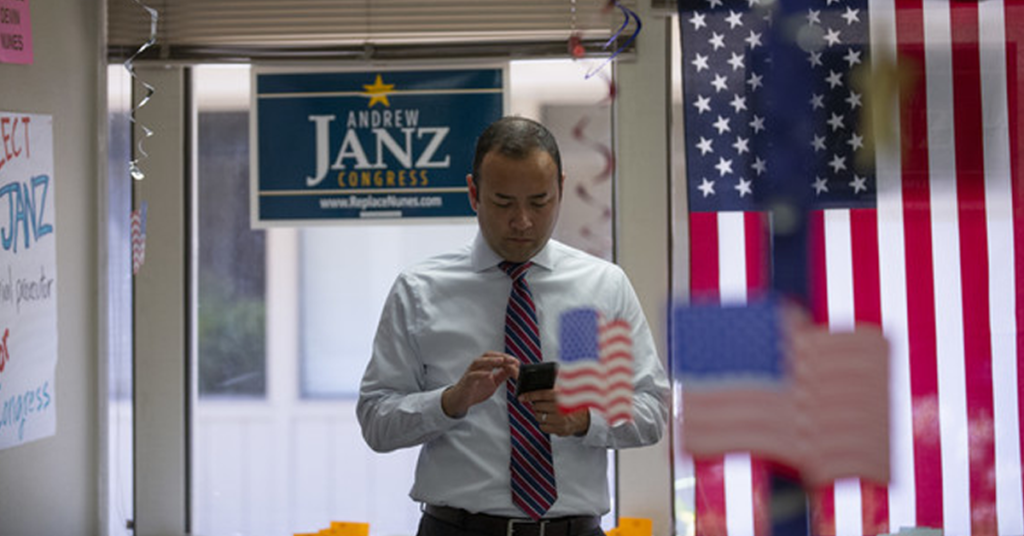 A fight between Fresno County Supervisors and the mayoral campaign of prosecutor Andrew Janz over a mandatory leave policy for County employees running for office is raising questions about Janz’s views on taking a leave during his 2018 campaign for Congress.

Earlier this year, Supervisors Buddy Mendes and Nathan Magsig floated a policy requiring county employees running for office to take a leave of absence from county work, either unpaid or via accrued leave time, ahead of primary and general elections.

In a letter sent Wednesday by Janz’s mayoral campaign to Fresno County Counsel, the prosecutor’s campaign manager described the policy as “unfair” and “undemocratic.”

Of particular objection is the fact that the proposal would force Janz to lose not only his salary during that absence – assuming he exhausted his leave time – but also county health benefits.

In a fundraising appeal emailed to supporters Thursday, the prosecutor’s camp played up that Janz’s wife, Heather, was expecting the couple’s first child in 2020.

“Republicans should be ashamed of the game that they’re playing around the well-being of my family and our unborn child,” the email, attributed to Janz, reads. “And from the party that claims to be ‘pro-life’ – this is blatant hypocrisy.”

However, this is not Janz’s first brush with taking a leave of absence from his work as a Deputy District Attorney while running for office.

During the 2018 election, Janz took an unpaid leave of absence from the Fresno County District Attorney’s office during the final stretch of the campaign.

In that instance, he collected a salary and health benefits from his heavily-financed Congressional campaign against Rep. Devin Nunes (R–Tulare).

According to filings with the Federal Elections Commission, Janz collected $5,516.78 in salary from the Andrew Janz for Congress campaign for three pay period over two months – on Oct. 15, Nov. 1, and Nov. 15, 2018.

Janz not only collected a salary from his $9.2 million Congressional campaign, he also had his campaign cover his health insurance to the tune of $1,481.10.

In a letter from Fresno County Counsel Daniel Cederborg, Janz requested 60 days of leave from the DA’s office in 2018, but was refused due to a County policy capping leave at 30 days.

“At the time, I understand Mr. Janz was upset that the current County policy did not allow for more time off,” Cederborg wrote. “Now, Mr. Janz appears to favor the existing County policy when it is convenient for his publicity needs.”

What’s the status on the proposal?

The campaign leave proposal was scheduled for a vote on Aug. 6, but was pulled from the Board agenda before the meeting.

County officials engaged in a lengthy meet-and-confer process with all county unions ahead of the Aug. 6 meeting, Supervisor Buddy Mendes told The Sun.

Janz’s own union, the Fresno County Prosecutors Association, met with County officials over the proposal during the meet-and-confer window. According to County Counsel Cederborg, the union “shared some concerns, [it] did not object to the version that came to the Board in August from going forward.

Despite the back-and-forth between Team Janz and the Fresno County Supervisors, a vote on the proposal has not been scheduled.

According to Cederborg’s letter, County officials are undergoing another round of meeting and conferring with various public unions.