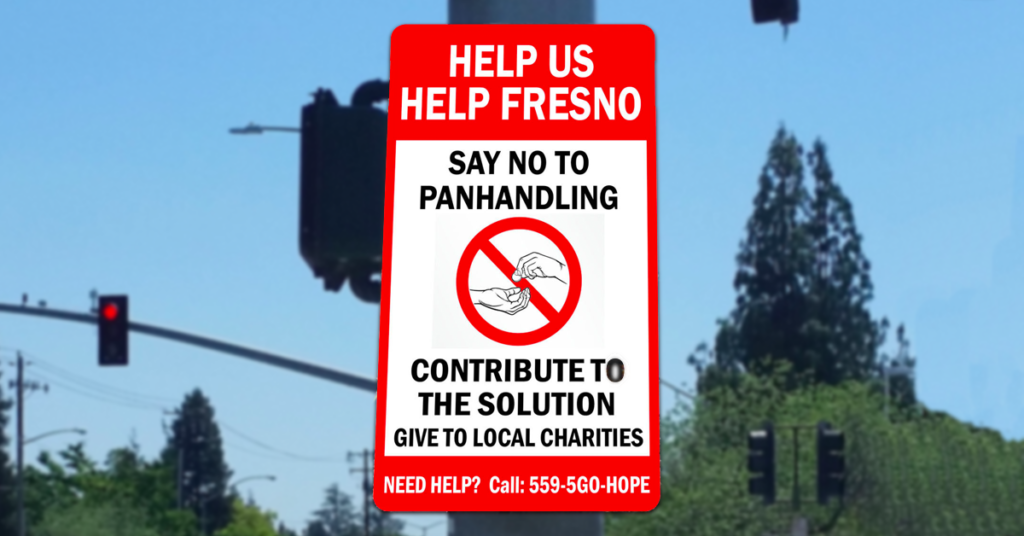 The initiative is titled “Help Us, Help Fresno” and was presented to the council in the form of a resolution. Bredefeld, the District 6 council member, wants residents to give money to nonprofits whose mission is to help less fortunate members of our city rather than give handouts to people on street corners.

I wrote about Bredefeld’s proposal on Monday for The Sun.

Bredefeld had pitched a similar idea to the council in April, but it failed on a 3-3 vote. The District 2 seat had been vacant.

Mike Karbassi, winner of a special election, took the District 2 seat at the start of Thursday’s meeting. That made all the difference for Bredefeld’s resolution.

At the heart of Bredefeld’s initiative is signage. The signs could be posted in prominent spots such as shopping centers or public rights-of-way. Funding could come from property owners or individual council members.

The signs are self-explanatory. They say: “Help Us Help Fresno. Say No To Panhandling. Contribute To The Solution. Give To Local Charities. Need Help? Call: 559-5GO-HOPE).”

Bredefeld said his initiative has the support of Mayor Lee Brand. He said several signs are already on display in the River Park area. He said the evidence so far is that the signs have reduced the amount of panhandling on streets near the North Fresno shopping center.

Bredefeld said his initiative is not the entire solution to the homeless/panhandling challenge that vexes Fresno, but “it’s certainly part of the solution…. This is really an all hands on deck effort. We all have to be working at educating the public – that giving these folks money is not the way.”

Soria was unsuccessful at getting a council majority to reject Bredefeld’s initiative and to substitute her version of signage addressing this issue.

Chavez said there’s no reason for heartburn by anyone on the dais.

“If a council member does not want this is their district, don’t pay for it,” Chavez said. “I’m sure every council member, such as myself, will have this conversation with their residents and with their business owners. If it’s a good fit, great. If it’s not, then don’t do it.”

“In law enforcement, we know from experience that when give to many of these individuals that are out there on the street we’re simply enabling them to continue in that current lifestyle,” Dyer said. “And that lifestyle often times is addiction, addiction to alcohol and/or drugs.”

Bredefeld’s initiative, Dyer said. “simply encourages individuals to not give to individuals who are out there on the streets, especially those who are on street corners that often times serve as a distraction to motorists, but to give to nonprofits.”

Mayor Brand is not running for reelection in 2020. Dyer is a candidate to succeed him. Dyer wore civilian clothes while addressing the Council.

Dyer said of Bredefeld’s initiative: “I know it works.”