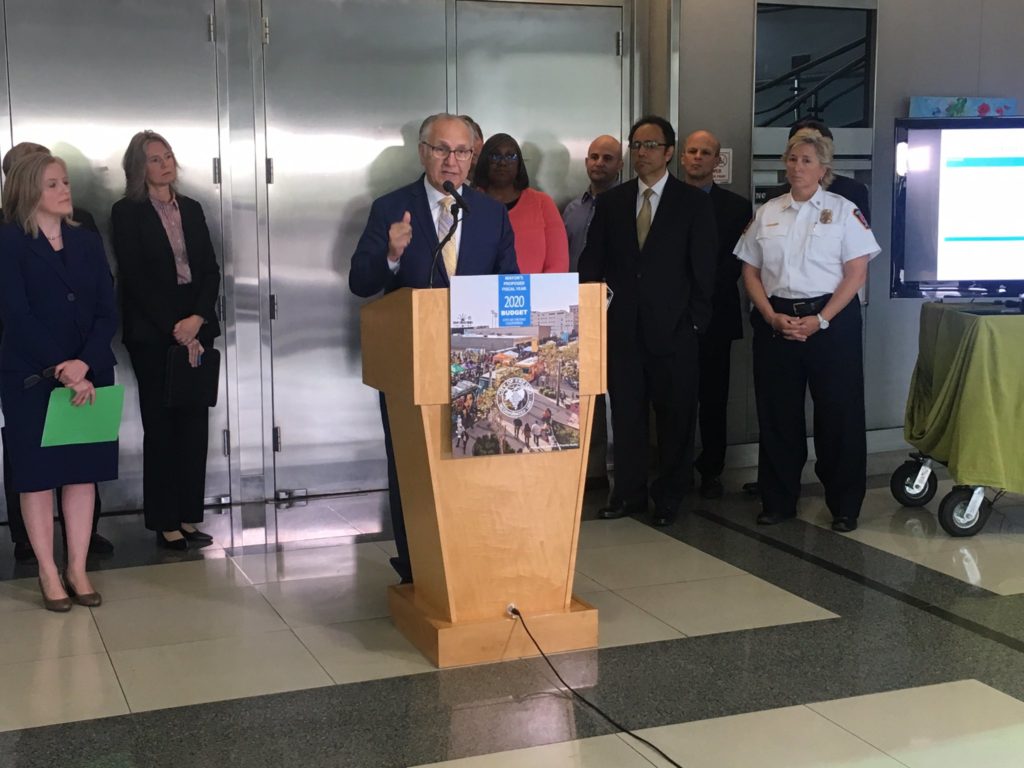 Fresno is making great strides forward but much more needs to be done, Mayor Lee Brand said last Wednesday in his State of the City address.

His remarks were made to an audience of about 900 in Downtown Fresno. The event was sponsored by the Fresno Chamber of Commerce.

The Mayor began by briefly taking stock of his life.

“The greatest blessing in my life is being a husband, a father and a grandfather,” Brand said. “And not far behind has been the opportunity to serve you as mayor these past two-and-a-half years. I’m fortunate to have found my place and purpose  in the city that I grew up in, and the city that made me who I am today. All things I have done in my life have led me to this moment.”

Brand recently announced that he would not seek a second term. He said on Wednesday that the time for him to depart the political arena is just over the horizon.

“But when you reach the age of 70, you begin to take stock of where you’ve been, where you are, and where you want to go in the time you have left,” Brand said. “That self-reflection led me to the realization that I would not run for a second term. Rather than spending precious time and energy on the campaign trail, I choose to work on my vision for Fresno forward by continuing to create economic prosperity for our city, improving public safety and the quality of life for all, and ultimately bringing Fresno together.”

Brand vowed to work harder than ever on the people’s business.

“For the remainder of the 18 months I have left in office, I will be focused every day on finishing strong,” Brand said. “I will keep the pedal to the metal until Dec. 31, 2020. In the days ahead, as we work to make Fresno a better place to live, work and play, let’s remember the words of President George Herbert Walker Bush from his Inaugural Address: ‘I take as my guide the hope of a saint: In crucial things, unity; in important things, diversity; in all things, generosity.’”

Fresno is a large and diverse city. Success in the public square requires teamwork, the Mayor said.

“Now more than ever, we need a spirit of collaboration that includes understanding and respecting everyone’s needs, goals and values,” Brand said. “Today we examine the state of our city, celebrate our shared achievements over the past year, and look ahead to the future. I ask you to join me in my vision to finish strong together. Just look how far we’ve come in just the past year.”

The Mayor’s list of City accomplishments over the last year include:

1.) Created a comprehensive citizen-based public outreach campaign to get public feedback on the search for Fresno’s next Police Chief that produced over 2,000 responses.

2.) Broke ground on the long-awaited Southeast District Police Station at Tulare and Argyle.

5.) Launched the online Rental Housing Registry, after a year of development from scratch by a talented local team, that has registered over 85,000 units.

7.) Developed a Motel Owners Association comprised of the owners of each property located on Parkway Drive, bringing violent crime down 25% in just a few months.

8.) Started the “Light Up Fresno” project that is retrofitting Fresno’s streetlights with new energy-efficient LED lights and has already replaced 8,500 of the 36,000 traditional streetlights in Fresno.

Brand closed by asking God to bless the City of Fresno. But before he did, the Mayor cautioned Fresnans to beware of factionalism.

“The state of our city is still strong but our strength is being threatened by forces that seek to create the disease in order to sell the remedy,” Brand said. “I seek the better angels of our nature. I seek grace in the middle of outrage. I seek the sustainable solution when the mob calls for impulsive action, and I seek the light through the darkness.

“What keeps me going every day, in good times and bad, is this simple premise: What unites us is stronger than what divides us. And when the truth is threatened, we work together to defeat it. I ask you all to reach out to the other side. This is how we finish strong – together.”