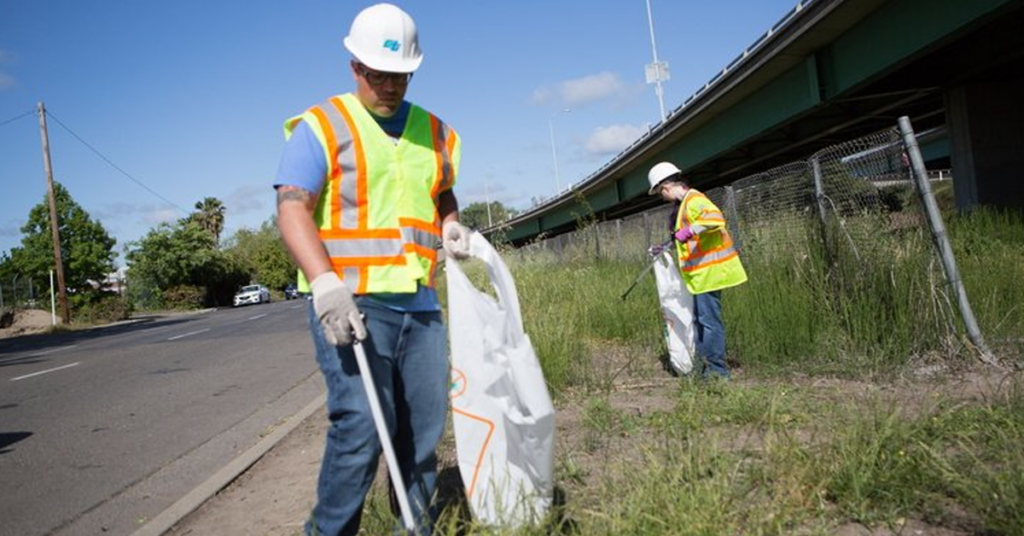 The visual of Fresno’s highways to any average driver is nothing close to pleasant. Deadened plant life and weeds have swallowed most highway embankments along Freeway 41 and Highway 99.

Almost everywhere you look going 65 miles per hour (or, admittedly, faster): there’s litter to the heavens.

A Thursday morning meeting between select Fresno City Council members and CalTrans officials was meant to serve as a blunt, no-nonsense, “come to Jesus” moment to get Fresno’s highways cleaned up.

The meeting opened, rather fittingly, with a cell phone ringing to the tune of “The Good, the Bad, and the Ugly” theme song. It wouldn’t take long for the tension to diffuse.

The takeaway message for the casual observer was obvious.

In City Hall’s briefing room, four tables were assembled for the roundtable meeting. On one table sat Council members Miguel Arias and Garry Bredefeld with a teleconference phone for Council President Paul Caprioglio (phoning from Montana).

At another, seated were a bevy of Fresno Police and California Highway Patrol officers. A third, featured select staffers from CalTrans. Lastly, were a handful of City of Fresno public works staff.

Bredefeld took the lead and set the tone of the average Fresno driver’s angst.

“Our highways, frankly, look like Third World countries,” Bredefeld said. “It’s a disgrace. It’s an abdication of the responsibilities of CalTrans.”

Shortly thereafter, Arias took over with videos from the highway embankments in his downtown-anchored district featuring homeless encampments, along with large amounts of trash and other rubbish.

The floor gave way to CalTrans’ local deputy director, John Liu, who spared no time explaining why roads have gotten dirtier than usual in recent years.

The largest culprit has been the decline in available free labor to do the work of cleaning embankments and underpasses.

The starting point – statewide – has been the near elimination of low-level criminal offenders incarcerated in California by Proposition 47.

Liu pointed out that in CalTrans’ District 6, which encompasses Madera, Fresno, Kings, Tulare, and Kern counties, began relying on local inmates at Fresno County Jail until cutbacks made that option equally tenuous.

Then CalTrans was forced to seek inmate labor from Madera County’s jail, which sputtered out due to logistical issues.

Up until 2018, CalTrans was able to receive work assignments for convicts who received sentences of 90 days or less in jail. More often than not, participants in AOWP are those that make up Fresno’s sky-high DUI conviction rate.

Last year, the County of Fresno ended AOWP referrals to CalTrans for road maintenance, as it would no longer pay workmen’s compensation insurance for injuries occurring along highways.

While CalTrans for quite some time has relied on inmate, parolee, and (until recently) probationer labor, it also has professional road maintenance staff.

In total, it has 20 landscape maintenance workers in Fresno tasked with handling 1,100 acres of landscape across its four major highways.

That leaves one landscape worker responsible for 55 acres of land, soon to be closer to 60 acres.

The most glaring litter and clutter along highway infrastructure, Liu said, was caused by illegal homeless encampments.

For CalTrans, interacting with homeless encampments has become complex. A 2006 court case – Kincaid v. City of Fresno – led the agency to require 72-hour notice before shutting down an encampment and seizing personal property of a homeless person.

However, the agency takes it one step further: the 72-hour notice is hard-set. Arrive at the encampment 73 hours after posting a notice, CalTrans requires maintenance workers re-notice the homeless property owner all over again.

Despite a $4.7 million annual budget for highway landscape, beautification, and clean-up, CalTrans’ Liu readily acknowledged the need for much greater funding.

After a year of maneuvering, the City of Fresno and Measure C came together to pony up $200,000 in funds (evenly split between the two entities) for a two-year pilot Litter Abatement Program.

CalTrans is matching the funds provided by Fresno and Measure C for the program.

That third ingredient mentioned above, a heaping dose of civic pride, is perhaps the hardest hill to summit.

While the struggles of dealing with Fresno’s homeless population is by no means simple, a fair share of garbage littered on our highways come from you and me.

To that end, it’s important to note that “Keeping Fresno Beautiful” starts with acknowledging it isn’t our personal trash can.