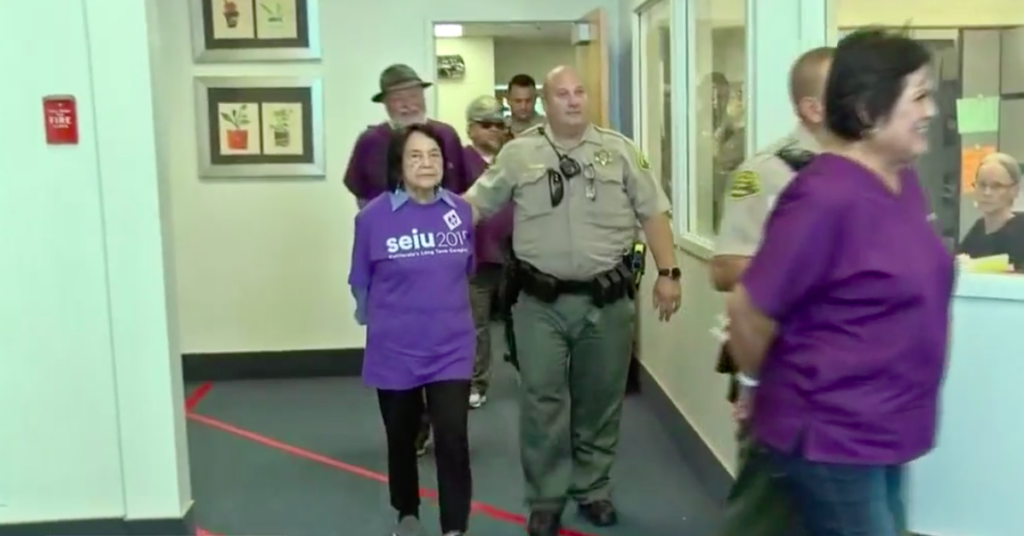 After a Fresno County Board of Supervisors meeting wrapped, a handful of protesters, including United Farm Workers co-founder Dolores Huerta, were arrested and removed from the Fresno County Hall of Records after attempting to block a building entrance on Tuesday.

Huerta was in attendance as part of a planned protest on behalf of Service Employees International Union (SEIU) 2015, which represents in-home support service (IHSS) employees.

She was arrested more than a half-hour after the Supervisors concluded their meeting Tuesday morning.

In total, Sheriff’s deputies made eight arrests. Six people, including Huerta, were cited for failing to disperse. Two were arrested for obstructing a doorway of a public business establishment and resisting arrest. They were booked into Fresno County Jail.

More than 500 purple shirt-clad protesters from across California arrived in downtown Fresno’s courthouse park Tuesday morning to protest the current impasse between the union and the County of Fresno over its salaries with home support workers.

Caregivers have been pushing for an increase in pay, as they are paid the minimum wage through the IHSS program.

IHSS workers’ minimum salaries are tied to the minimum wage, currently $12 in California.

SEIU and its supporters wanted Fresno County – the largest IHSS county in the San Joaquin Valley – to supplement the program with additional funds for wage increases.

However, Fresno County has never contributed additional funds to the program and is keeping wages at the minimum wage.

In 2018, only 23 of California’s 58 counties had IHSS wages above the old minimum wage. Five of those 23 counties were in inland California.

Prior to the minimum wage increase in 2019, Mariposa County was the sole Valley county that had IHSS wages above California’s then-minimum wage of $11.