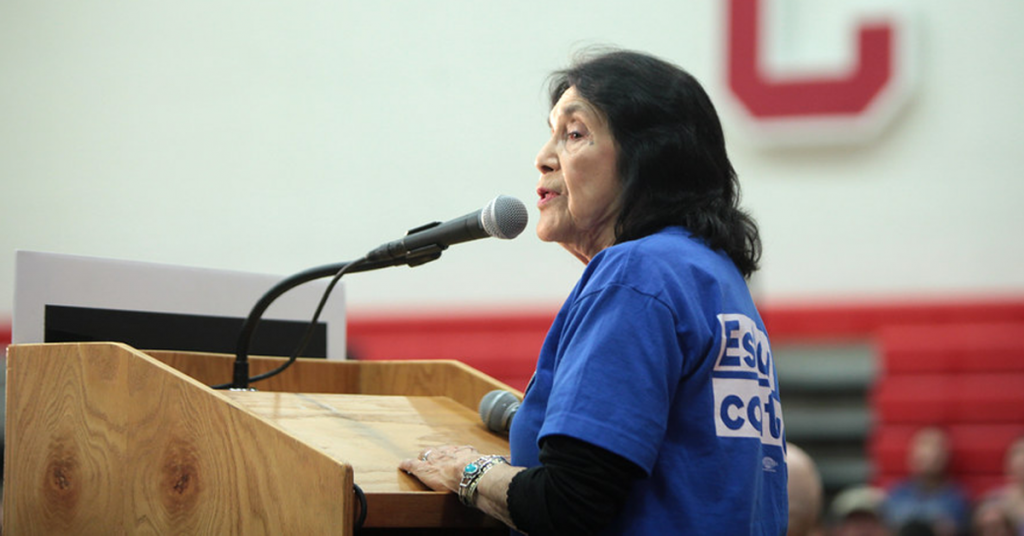 Get ready to see a familiar face grace the airwaves this fall: Dolores Huerta is on the move.

Huerta, the co-founder of the United Farm Workers labor union, is expected to make her pitch for Rep. TJ Cox’s (D–Fresno) re-election.

That’s according to a photo of the ad script obtained by The Sun.

The photo, taken aboard a United Airlines flight in July, shows Huerta’s dialogue in the ad along with on-screen graphics.

David Valadao’s not our friend. He voted with Donald Trump ninety nine percent of the time. Valadao even opposed the DREAM Act – just like Trump.

That’s why I support TJ Cox – a true friend.

The claim of Valadao’s opposition to the DREAM Act is a slippery one.

For starters, Valadao signed on as a co-sponsor of the DREAM Act in 2017 along with a bevy of alternative immigration reform bills.

Four years earlier, he was one of three House Republicans to co-sponsor the companion to the Senate’s Gang of Eight immigration reform bill.

Prior to 2017, memoranda from Washington Democrats often blurred the lines between Federal legislation titled “the DREAM Act” and the State of California’s DREAM Act, enacted in 2011, when referring to Valadao.

The California DREAM Act, which Valadao voted against as a state legislator, opened the door for so-called “DREAMers” to, among other things, receive California resident financial aid benefits for higher education so long as they met state residency and grade-point average requirements.

The Federal version varies widely from its California counterpart, in that it grants so-called “DREAMers” the ability to earn permanent residency in the United States after passing a criminal background check and meeting a variety of standards including holding employment, attaining higher education, or serving in the military.

After Valadao’s co-sponsoring of the Federal DREAM Act, Democrats have pointed to the Republican’s votes against procedural moves that would have enabled the bill to circumvent the conventional committee process.

However, in 2018, he and fellow Valley Republican, former Rep. Jeff Denham (R–Turlock), led the charge to force then-Speaker Paul Ryan to allow a vote on four different immigration bills – including the DREAM Act – via a discharge petition.

As for the farm labor scion’s appearance in the southern Valley Congressional race, there’s little love lost between the Huerta clan and the Hanford dairyman.

After all, Valadao defeated Huerta’s son, labor lawyer Emilio Huerta, by a 13-point margin in 2016.

Huerta attempted a second try at ousting Valadao in 2018, but bowed out at the filing deadline at the behest of Washington Democrats seeking to move Cox from a crowded field vying to defeat Denham and into Valadao’s southern San Joaquin Valley seat.