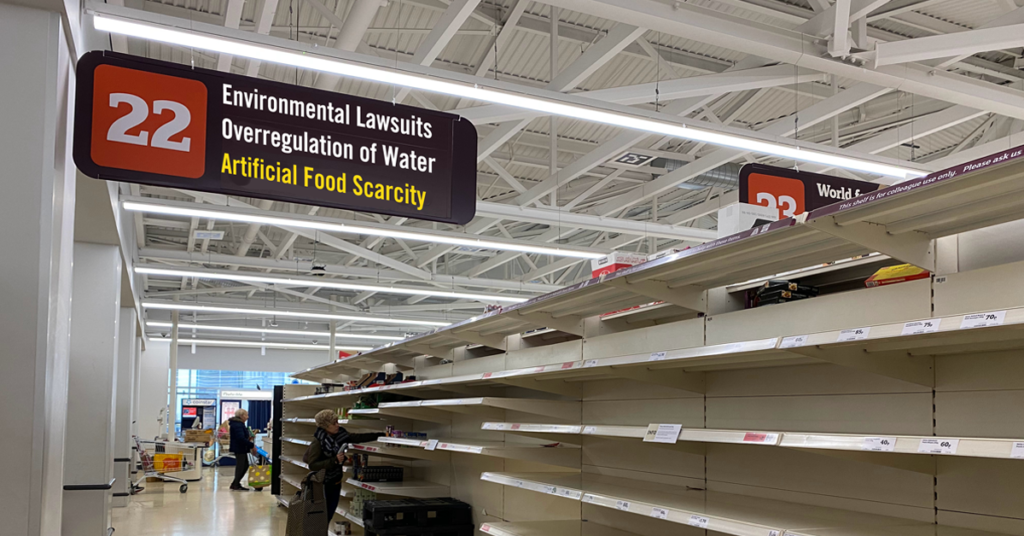 The list of plaintiffs who want to litigate water and food production against the world’s food supply grew a little bit last week.

The latest to join the litigation train are three environmental groups – the Center for Biological Diversity, Restore the Delta, and the Planning and Conservation League.

Apparently, they are suing the United States Bureau of Reclamation for awarding permanent contracts to fourteen of the Bureau’s water users.

Of course, the water they are trying to stop flows to farmers who produce food for much of the world, flows through the Central Valley Project of California, and is federally managed.

Their claim is the CVP causes widespread damage, blocks fish migration,  and kills wildlife, because of “reduced fresh water flows through the Delta,”

You would be reading fake news if I didn’t point out some perspective on the amount of water the CVP transports to people and millions of acres of land which produces food for the world.

Their claim is that the CVP takes so much of the fresh water from the Delta that these seemingly catastrophic events are occurring.

One would think it must be a giant straw sucking all the water to the south, right? No.

Let’s use last Thursday as an example.

That is 5 percent of the total. Surely, 5 percent couldn’t cause this damage.

In fact, over a couple of decades, over 80 percent of all the fresh water that flows through the Delta does not go to people or farms. It goes to the ocean.

Of the 20 percent remaining, the CVP takes only a portion.

Obviously, their motive is clear. They do not want land used for agriculture in the Central Valley of California.

If you removed three-quarters of a cup of water from a gallon jug, would you or anyone else notice? Probably not.

That’s the same 5 percent of the total, just like the CVP was able to pump south to people and farms on Thursday.

If their claims weren’t held to account, being an environmental lawyer would be one of the easiest careers on the planet. They do not care that we grow food, nor where it comes from so long as it doesn’t come from here.

Most importantly, they believe the land that is currently growing food is better utilized by either returning to its natural, baren state, utilized for green energy to be sapped by the Bay Area, “cheap” housing, or some combination thereof.

Their radical agenda presents an opportunity we should celebrate for its effects on the world.  It is the Central Valley Project.

It might be a good idea to let people know what the CVP actually does before the State of California and Bay Area environmental groups are successful in their attacks on its existence.

Many don’t realize the CVP is a multi-purpose system that moves water, reaching over 400 miles through the Central Valley of California which includes 20 dams and reservoirs, canals, hydroelectric plants and other facilities. Its dams provide flood protection and water for people, farms, and other businesses.

There are 250 water contractors in the CVP and it sends water to half – yes, half – of California’s 58 counties.  But that’s not all.

The CVP turns a Valley and would-be desert into the biggest grocery store on the planet.

In just ten of these counties, the water supplied through its maze of canals provides for almost $37 billion in agricultural production.

This number does not include the thousands of people who comprise support services – processing, shipping, sales, crop science fields, chemical suppliers, equipment suppliers, and the independent and national grocers who depend on that agricultural production, just to name a few.

We typically see agriculture statistics offered in dollar amounts which allows us to see the difference in previous years in production but also allows the media to excoriate farmers for earning a living for what they do.

And that’s merely a sampling of the agricultural bounty.

This is what that minimal amount of water taken through the CVP allows the world to experience and consume.

Maybe our state leaders and environmental lawyers should sign up for a tour and listen closely.

By the year 2050, the world population is expected to reach 9.2 billion people.

Very few places on earth, because of soil, weather, technology, and individual ability, can produce the quality and quantity of food and other agricultural products that are produced in the Central Valley of California. It is imperative that we fully understand what is at stake when politicians who and environmental radicals who have never set foot in the region make outlandish claims about the use of water which feeds the world.