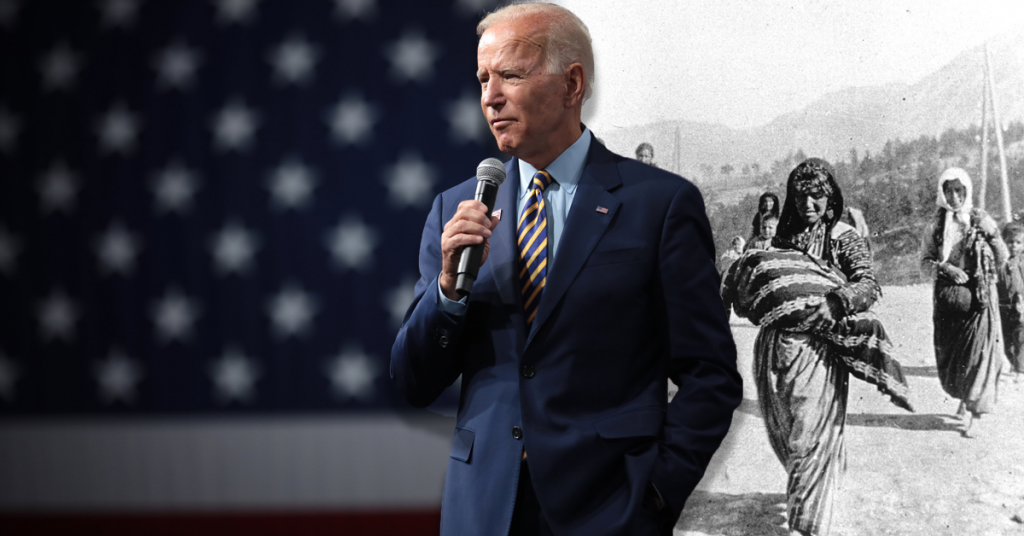 On the 106th anniversary of the commencement of a systematic mass killing and deportation of ethnic Armenians from the Ottoman Empire that led to the death of an estimated 1.5 million people, President Joseph R. Biden formally recognized the historical event as a genocide.

“Each year on this day, we remember the lives of all those who died in the Ottoman-era Armenian genocide and recommit ourselves to preventing such an atrocity from ever again occurring,” Biden said in a statement issued on Saturday.

“Beginning on April 24, 1915, with the arrest of Armenian intellectuals and community leaders in Constantinople by Ottoman authorities, one and a half million Armenians were deported, massacred, or marched to their deaths in a campaign of extermination. We honor the victims of the Meds Yeghern so that the horrors of what happened are never lost to history. And we remember so that we remain ever-vigilant against the corrosive influence of hate in all its forms.”

The term, which was previously used by only one other President – Ronald Reagan in a 1981 Holocaust memorial speech – has served as a political minefield for thirty years.

At the center of the minefield, stringent denials by the Republic of Turkey – the successor state to the Ottoman Empire – and its vast lobbying network in the United States. Turkey, a strategic NATO ally in the Middle East, has regularly leveraged its position to keep American presidents from making similar proclamations.

That includes President Barack Obama. In 2007, then-Senator Obama stated he would recognize the Armenian Genocide if elected.

During each of his eight years in office, Obama declined to use the term “Armenian genocide,” opting instead to use the Armenian phrase “Meds Yeghern,” meaning “Great Catastrophe.”

The refusal came despite Obama appointing Samantha Power, a high-profile scholar of the Armenian genocide and advocate for its recognition.

The United States’ aversion toward recognizing the World War I slaughter as a genocide greatly diminished in 2019 when Turkey began a military campaign in Syria targeting Kurds coupled with a strategic arms purchase with Russia, threatening NATO stability.

Following the arms purchase, a resolution recognizing the Armenian genocide cleared the House of Representatives with near-unanimity. A companion resolution was unanimously approved by the U.S. Senate.

The Trump administration, however, did not alter its view of the mass killings.

Now, with Biden’s recognition, the United States position of recognition of the 20th century’s first genocide is unified.

Friday, Biden spoke with Turkish President Recep Tayyip Erdogan and reportedly informed him of his decision to recognize the Armenian genocide.

“It is an important day for all Armenians. Following the resolutions adopted by US Congress in 2019, President Biden honored the memory of victims of the Armenian Genocide,” Pashinyan said via Twitter. “The US has once again demonstrated its unwavering commitment to protecting human rights and universal values.”

Local officials in the San Joaquin Valley, home to a sizable Armenian American population, commemorated the historic announcement and memorialized the solemn occasion.

Rep. Devin Nunes (R-Tulare) said the recognition served as a starting point to check recent acts of military aggression against Armenia by Turkey and Azerbaijan, especially over the region of Nagorno-Karabakh.

“106 years after the Ottoman Empire began the mass murder of Armenians, the United States government has ended the historical vandalism of Armenian Genocide denial by recognizing the Armenian Genocide,” Nunes said in a statement issued to The Sun. “This is a step I have sought for years despite the refusal of both Republican and Democrat administrations to call this tragedy by its proper name. Today, I continue to support the Armenian people, particularly in the face of continued aggression against Armenia by Turkey and Azerbaijan.”

Rep. Jim Costa (D-Fresno) reflected on the historical impact of the announcement as it relates to Turkey’s position with the United States.

“Today we remember the lives of the one and a half million Armenians who were needlessly slaughtered by Ottoman Turks in 1915. The record of this atrocity is well documented, and it’s long past the time for us to officially acknowledge one of humanity’s most horrific crimes,” Costa said in a statement. “By standing up to Turkey’s policy of denial, we not only honor the victims, but we reaffirm to the international community the United States’ unconditional opposition to all instances of genocide and injustices around the world.”

Rep. David Valadao (R-Hanford) a long-time author of the Armenian Genocide resolution in the House of Representatives, thanked Biden for his work to acknowledge the century-old crime against humanity.

“I am glad to see President Biden respond to my request to take formal action to recognize the Armenian Genocide, a tragedy I have been determined to see acknowledged for years alongside so many others in Congress and the entire Armenian-American community,” Valadao said.”

“The Armenian-American community has been steadfast in their efforts to see their pain recognized, and I am honored to have done my part in seeing the United States formally acknowledge the Armenian Genocide at last. This tragedy at the hands of the Ottoman Empire must never be forgotten, and it is encouraging to know the voices dedicated to preserving the memories of those lost have finally been heard.”

In sum, 30 nations recognize the Armenian genocide, including nations with Armenian diaspora populations such as France, Argentina, and Russia.

But others, such as Germany – home to the largest population of Turks outside of Turkey – also recognized the genocide on its centennial in 2015.