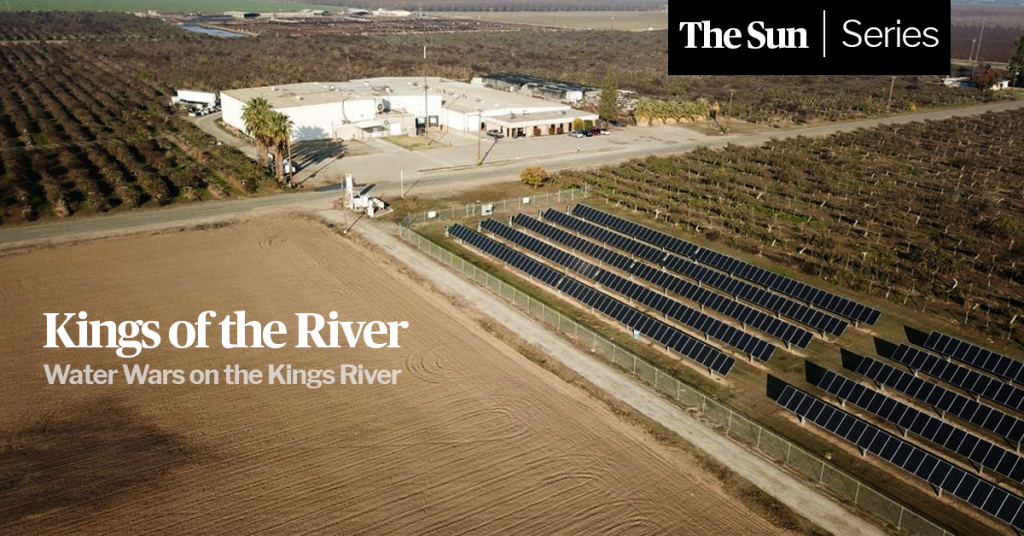 This is the second part of the Sunlight Series “Kings of the River.”

Though it doesn’t hold historical contentiousness like its counterpart along the Central Valley Project, the Kings River has its own tale to tell.

Serving as a lifeline of sorts for three of the central San Joaquin Valley’s five major counties, the Kings is filled with its own universe of water agencies run by engineers, lawyers, farmers, and politicos jockeying to manage the state’s most precious resource on one stream.

But, in the midst of a global pandemic, locals argue that their source of water is serving as a warning sign more than anything else – one with modern-day echoes of the Owens Valley.

It all centers on what they posit serves as their own apocalyptic battle. This one, unlike the water wars focused on the Delta, doesn’t concern itself with fish.

Instead, it’s a single proposed project, located at the southernmost end of the Kings River, which has turned the regular tenor of aquatic pugilism into an all-out water war.

Today, the California Water Resources Control Board will take its first steps of formally review of a project pitched by the Semitropic Water Storage District, based in northwest Kern County.

The project’s aim? To move a portion of Kings River water south into Kern County for potential use for recharging the aquifer, irrigating agriculture, or – most intriguingly – selling to Southern California water users.

Standing in its opposition is a cavalcade of strange bedfellows: big and small farmers, social justice advocates, three of the Valley’s counties, and 110 designated disadvantaged communities.

Their argument? The long-term implications of Semitropic’s move serve as an existential threat to the Valley’s survival.

How the project came to light begins, as much of California’s water battles have this decade, with four letters: SGMA.

The farmer’s other four-letter expression

Enacted by California Gov. Jerry Brown in 2014, the Sustainable Groundwater Management Act sought to rein-in the shift in the state’s freewheeling groundwater pumping, which itself was a side effect of slackening water flows from the Sacramento-San Joaquin Delta and decades of limited investment in surface water infrastructure.

I’ll note that further detail of the Brown-era law is provided in an explainer penned by Sun contributor Don Wright.

San Joaquin Valley farmers bemoaned the 2020 launch of the law, which is projected to put millions of serviceable acres of the Golden State’s fertile farmland out of production.

Like other decisions before it, SGMA is set to accelerate what many long feared: the creation of a robust, wholesale market for water available to the highest bidder.

Through government mandate, SGMA generated an unseen level of water scarcity while establishing built-in incentives to foment a mad dash for water rights and access by the bevy of agricultural, industrial, and municipal water users in the Golden State.

And where overdrafted basins are unable or incapable of financing and gathering water resources to come into compliance with the law, they could be – quite literally – wiped off the map.

Semitropic sits within the Kern County Groundwater Basin, one of nine regions of the state deemed by California’s Department of Water Resources as being in “critical overdraft” of its groundwater.

A problem in search of a solution

In 2015, the public received its first whiff of work being undertaken by Semitropic Water Storage District.

Under the auspices of reducing its overdraft liability under SGMA, the district pitched a plan that was was, and still is, fairly straight forward: cull Kings River floodwater and move it into Semitropic’s sphere of influence within the parched Kern County basin.

Following the 2015 outing of the proposed floodwater project, members of the Kings River Water Association – the collective body of water Kings River water users – and Semitropic attempted negotiations to reach a fair deal over potential use of floodwater.

Negotiations, swiftly, went nowhere. From there, hostilities between the largest players in region swelled.

The district’s plan, as it stands now, is to divert floodwater from the South Fork canal of the Kings River toward a to-be-constructed 15,000-to-30,000 acre feet reservoir near Kettleman City.

From there, water can be shifted from the Tulare Lake basin to the Kern County basin via the California Aqueduct.

Suffice it to say, the current plan is a scaling back of Semitropic’s ambitions for floodwater. More on that front later.

But the core elements of the floodwater project – shifting water out of the Kings River and into the Kern County basin – opened the door for total warfare of an historic shift of water from the Kings River to a place its waters have never touched.

With negotiations between Kings River water users and Semitropic on ice, a foot race emerged among Semitropic and three of the biggest irrigation districts along the Kings – Fresno Irrigation, Alta Irrigation, and Consolidated Irrigation – to establish legal claims to open or shut down the project.

Within two weeks, the amalgamated Kings River water users and Semitropic had filed competing petitions before the State Water Board requesting one of two things.

For Kings River water users, they wanted to uphold a unique legal designation: that the river was declared a “fully-appropriated stream.”

The designation stretches back to a decision by the state water board in 1967 which assigned “essentially all of the available unappropriated water of the Kings River” to the Kings River Water Association.

The decision left one caveat: that Kings River water users may not be able to accommodate full runoff in a year of extreme flooding.

Subsequent revisions to the state’s declaration in 1991 and 1998 upheld that determination.

In its petition to open the Kings River up to utilize its floodwater, Semitropic notes the caveat issued by the water board in 1967 but leans more heavily on another allegation.

That allegation? That the Kings River Water Association abandoned two of its licenses granted in late 1960s.

The petition filed by Consolidated, backed by the Water Association, argues that – in the event the Kings River loses its status as fully appropriated – Kings River water users can divert water to meet their groundwater sustainability goals under SGMA within Fresno, Kings, and Tulare counties.

35 different entities weighed in on the dueling petitions in letters to the California Water Board.

Among them were missives penned from County Supervisors in Fresno, Tulare, and Kings counties and the cities of Dinuba, Fowler, Kerman, Sanger, and Selma.

With this positioning, Kings River water users sought to leverage their own SGMA needs as a trump card over a bevy of Kern County water demands and ambitions.

And for good reason, given the history of the project.

Through the course of negotiating and quarreling with Kings County water users, Semitropic and its users have seen the much-vaunted Tulare Lake Floodwater project go through its own ebbs and flows.

Up through 2018, Semitropic sought $452 million in bond funding generated from the 2014-approved Proposition 1 by leveraging the floodwater project as a method of storing not only Kings River floodwater but also floodwater from the Delta.

Proposition 1, in its own right, was narrowly-tailored (too narrowly, many water advocates argue) and created strict standards for appropriating funds with an intense focus on water projects that benefited the public.

In making its near-half billion dollar pitch to the California Water Commission in 2018, state officials delivered grim news on the project: the rosy projections of public benefit were almost nonexistent.

Semitropic officials tabbed public benefit at $1.62 per dollar invested into its floodwater plan. State officials said it was worth a single penny on the dollar.

Why? It boils down to what happens after the water leaves the Tulare Lake bed and winds up within Semitropic’s control.

To Kern County – and beyond

The punchline of the southern San Joaquin Valley’s cacophonous battle is what, ultimately, Semitropic plans to do with Kings River floodwater obtained via this proposed project.

Hoping to keep its options as open as possible, the district pins its project on benefiting Kern County farmers and meeting groundwater goals for its groundwater sustainability agency.

But, speaking to SJVWater’s Lois Henry, Jason Gianquinto left open the distinct possibility that Semitropic will deal its water to feed the pumps of Southern California metropolises.

And that’s where Kings River watermaster Steve Haugen gets pointed.

The prospect of losing water resources to Southern California is, in no uncertain terms, a threat to the San Joaquin Valley’s survival not only for agriculture, but for habitability.

“It would be devastating to dozens of cities and communities relying on Kings River water, including Fresno and Clovis,” he added. “Dozens of rural areas that would be harmed by Semitropic are disadvantaged. Their residents are already experiencing groundwater quantity and quality issues ranging from significant to severe.”

But in order for the project to work for Semitropic, it requires the cooperation of an ever-growing figure in the Valley’s water landscape.

And as the State Water Board advances from its preliminary hearings Monday into a full inquiry, expect nothing short of a full-court press from both sides of this water war.