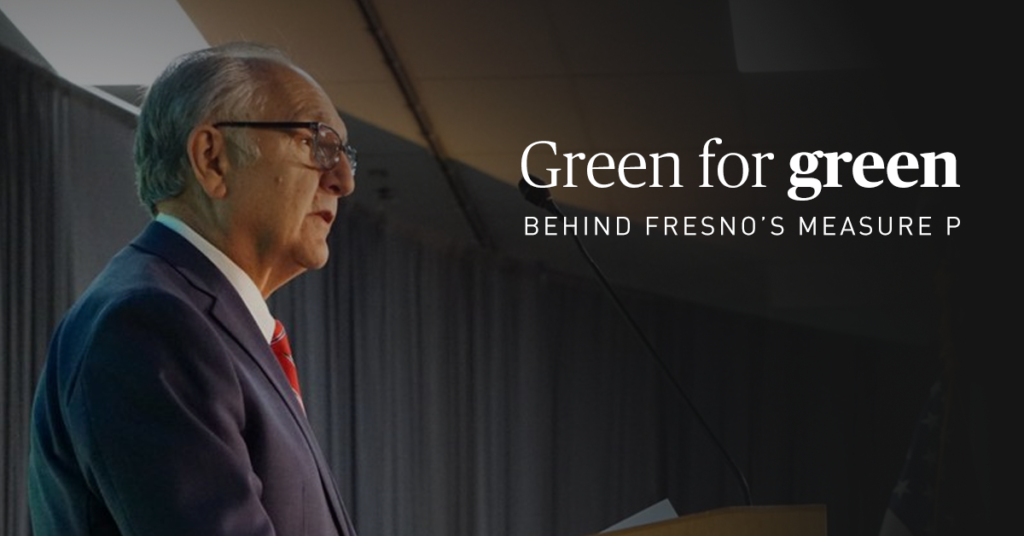 Read the first part of this SUNLIGHT Series on Fresno’s Measure P here.

In January 2017, Lee Brand took up governing the City of Fresno after 18 long months of campaigning, while Ashley Swearengin would take up campaigning after eight years of governing the city.

And while the groundwork for a parks initiative was laid on a theme of “Parks for All” in February 2016, by the following October parks advocates turned their focus to “neutralizing” opponents and boosting support for a sales tax.

In between, many of the players had taken new roles with new titles.

Swearengin was no longer Fresno’s chief executive. She was now the chief executive of the Central Valley Community Foundation (CVCF), a multi-million-dollar private philanthropic foundation.

Danielle Bergstrom, Swearengin’s chief policy advisor at City Hall, would join as Policy Director for the foundation. Other city staffers would also join the foundation’s ranks.

Down at City Hall, Brand similarly staffed up.

Tim Orman, the long-time local political guru who helped guide Brand to victory over Perea, would take the helm as Chief of Staff.

The switch from Swearengin to Brand atop the City’s organizational chart brought whatever momentum for a parks tax there was to a grinding halt.

The Trust for Public Land (TPL), the nonprofit that aided the Swearengin administration in studying various funding methods for parks in Fresno, was itching to move forward.

Based on emails acquired by The Sun, TPL’s Government Affairs Manager Mary Creasman met with then-Assistant City Manager Wilma Quan and Fresno City Council member Esmeralda Soria to discuss the nonprofit’s work with the city in mid-January 2017, days after Brand was sworn-in as Mayor.

Creasman told Quan that a coalition of unspecified stakeholders “really want to see a ballot initiative move forward” but had not seen results from the nonprofit’s November 2016 poll, as the Brand administration had not reviewed the nonprofit’s findings.

In a back-and-forth with Quan, Creasman sought to release the nonprofit’s feasibility study on parks and polling results on a sales tax hike to the Fresno City Council during a Feb. 9, 2017 workshop.

Quan, however, shot down the idea and pushed Creasman to first meet with Brand and his team before handing over TPL’s study and polling results to City Council members.

By early February, Creasman finally got her meeting with Brand.

In emails following her visit to Fresno, Creasman denoted that she would conduct additional research into special districts, a completely different avenue of funding parks than had been explored by the Swearengin administration.

As defined in TPL’s feasibility study, special districts are “a form of local government created by a community to meet a specific need… when residents or landowners want new services or higher levels of services, they can form a district to pay for and administer them.”

The study found that none of the community facilities districts listed parks as their purpose, however there are four such districts in the County of Fresno, including the Calwa Recreation and Park District.

After having studied a parks tax pro bono for a year, including funding a poll on voters’ appetite for a sales tax hike, TPL issued an ultimatum on March 10, 2017: the City would need taxpayers to cough up cash to have TPL lead the charge on a parks tax.

The scope of services TPL detailed in the memo was limited to an advisory role with some assistance on engaging the public and media before an initiative would be placed on the ballot.

In the memo, TPL states that their “technical assistance” fee did not include “the actual costs of conducting a public opinion survey or any costs associated with the voter education effort that would be necessary if a measure is referred to the ballot.”

Or, in common parlance, polling and a full political campaign are sold separately.

The ultimatum was not well-received by the Brand administration. By June 2017, Team Brand and the Trust for Public Land’s government affairs team effectively ceased written communication.

The road to placing a parks tax on the ballot would now run around, rather than through, City Hall.

With a parks tax largely dead-on-arrival at Fresno’s City Hall, Team Swearengin began revving its own engine to put the issue on the ballot.

With no government support left, the Trust for Public Land enlisted the services of TBWB Strategies, a San Francisco-based political consulting firm that exclusively focuses on on bond and tax measures.

In June, the firm prepared a timetable to place a parks tax on Fresno’s ballot for November 2018.

The rest of 2017, TBWB argued, was for assembling the coalition that would take the then-unwritten tax measure from concept to campaign.

Beginning in 2018, the work of gathering signatures and qualifying the measure for the November ballot would commence.

An internal document crafted by CVCF staff detailed the first roster of stakeholders, a veritable “who’s who” of local activists and power brokers from across the city.

The Sun was unable to receive comment on CVCF’s internal documents related to Measure P.

The “strange bedfellows” effect was coming full bore early in the process.

Such was the case for Soria and Catalano. The two were opponents in a close Fresno City Council race 2014. Then, at the beginning of 2017, Soria voted to cancel the controversial parks outreach contract for which Catalano’s public relations firm was a subcontractor.

Now, they would join an initial list of 41 people at the ground floor of a potential tax initiative.

Beyond the stakeholders, CVCF’s spreadsheet listed two other tabs of information. The first was an inventory community leaders who would need to be contacted to support an eventual ballot measure.

The other a list of “ideal endorsements” that ran the political spectrum and, perhaps more tellingly, a list of groups and players that had to be neutralized.

As the key players assembled with Team Swearengin emerged, tough decisions had to be made. How would they be able to convince two-thirds of Fresno voters to tax themselves for improving and expanding parks? And how would they “neutralize” their opponents?