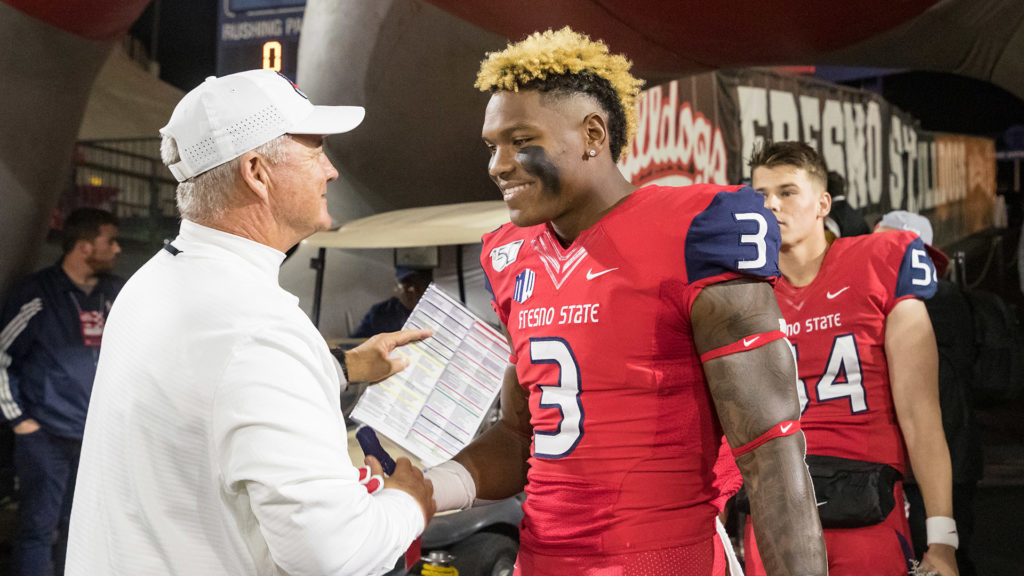 Two former Fresno State Bulldogs were selected in the NFL Draft over the past weekend, followed by several others who went undrafted and signed as free agents.

The Atlanta Falcons selected linebacker Mykal Walker in the fourth round, 119th overall.

“It’s a dream come true for me to join this team and help any way that I can,” Walker told reporters on Saturday. “As far as where I may be in the defense, right now I’m looking forward to meeting with the coaching staff again and talking to them further and see where they want me to play. For me, I don’t know where I’ll be exactly, but I’m willing and able and can’t wait to put my head down and grind away – anything they need me to do.”

Walker transferred to Fresno State from Azusa Pacific in 2017. After using a redshirt season in 2017, he played two seasons for the Bulldogs at defensive end, outside linebacker and inside linebacker.

The other Bulldog to go was offensive lineman Netane Muti to the Denver Broncos. He went in the sixth round, 181st overall.

“I think I’m the best guard in this class,” Muti told reporters on Saturday. “I feel like they really got a steal. I’m just excited. I’m ready to give Broncos Nation my all, just go out there and learn from the older guys in the O-line room and just be a part of the family and just win games. I’m just excited.”

Muti joined Fresno State in 2016 and utilized a redshirt season his freshman year. He started all 14 games in 2017, but he suffered season-ending injuries in 2018 and 2019 just a few games into each season.

The former Bulldogs weren’t the only players with Valley connections to hear their names called in the draft.

Bakersfield native Jordan Love was arguably the biggest surprise of the draft. Although various pundits predicted Love – a quarterback from Utah State – would be selected in the first round, not many people had him going to the Green Bay Packers.

The Packers traded up to grab Love at 26th overall. Love will presumably sit behind quarterback Aaron Rodgers for a few years, oddly enough mirroring when Rodgers was selected in the first round and sat behind his predecessor Brett Favre for a few years.

Cornerback Jaylon Johnson from Utah went in the second round, No. 50 overall, to the Chicago Bears. Johnson attended Central High School in Fresno.