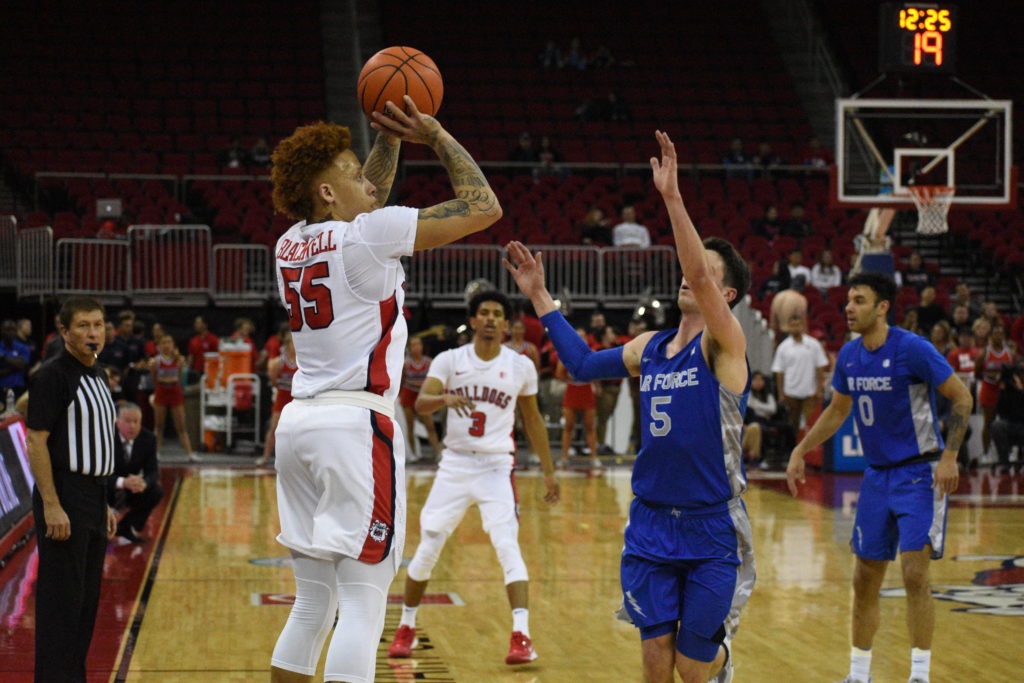 Noah Blackwell stepped up in a big way for Fresno State in the 71-62 win against Air Force and became the leader that the Bulldogs need moving forward as the Mountain West Tournament approaches.

The senior guard had his best game of the season against the Falcons as he tied a career-high 25 points Wednesday evening at the Save Mart Center.

After the win, Fresno State head coach Justin Hutson said that he was proud of his team for adapting to the challenges that Air Force presented and was especially proud of Blackwell for knocking down some crucial shots.

“He’s leading a little bit more with the ball,” Hutson said. “He’s not as vocal as I would like, but he sure is leading with example. And the way he shot the ball tonight and took care of it and found guys was imperative to our win.”

Blackwell was locked in from the start. The Bulldogs jumped out to an early 8-0 lead, which included two three-pointers from Blackwell.

Air Force battled back and didn’t allow Fresno State to pull away – the Bulldogs went into the locker room with a 32-28 lead.

Following an 8-point performance in the first half, Blackwell exploded for 17 to finish out the game. Overall, he shot 8-13 from the field, including 5-9 from beyond the arc. He also made all four of his free throw attempts.

Air Force briefly took a 36-35 lead just a few minutes into the half, but the Bulldogs promptly retook the lead and went on a 17-4 run to lead by 12 points midway through the half.

“I was a little ticked off about that,” Hutson said. “I want us to mature a little bit through that. I don’t mind mistakes, and they happen, but we have to learn from that. I try to show positive stuff when we come back in tomorrow, but we’re going to have to show some of this stuff when we miss leads and we let up and we don’t make the team beat us.

“We make mistakes. There are going to be mistakes out there, but can’t be as many and especially at those times.”

Fresno State didn’t let Air Force complete the comeback. Freshman guards Jarred Hyder and Anthony Holland hit consecutive threes to push the lead back out to 12 with just over a minute left on the clock.

Senior forward Nate Grimes dominated the glass and led the ‘Dogs with 14 rebounds, and Holland was second with 11 rebounds.

The Fresno State women’s basketball team suffered its first Mountain West loss of the season on Wednesday on the road at Air Force.

The Falcons jumped out to an 18-11 lead at the end of the first quarter, and the Bulldogs were never able to catch up, finishing with a 88-65 loss.

Fresno State already secured the regular season conference title and the No. 1 seed in the Mountain West Tournament, but now a shot a perfect 18-0 conference record is unachievable.

Before the loss, the Bulldogs already had a slim shot at making the NCAA Tournament as an at-large bid if they do not earn the automatic bid by winning the conference tournament.

Now, the ‘Dogs will almost certainly have to win the Mountain West Tournament – which they will be favored to do – to advance to the NCAA tournament.

Fresno State returns home Saturday to host Nevada at 2 p.m. at the Save Mart Center.