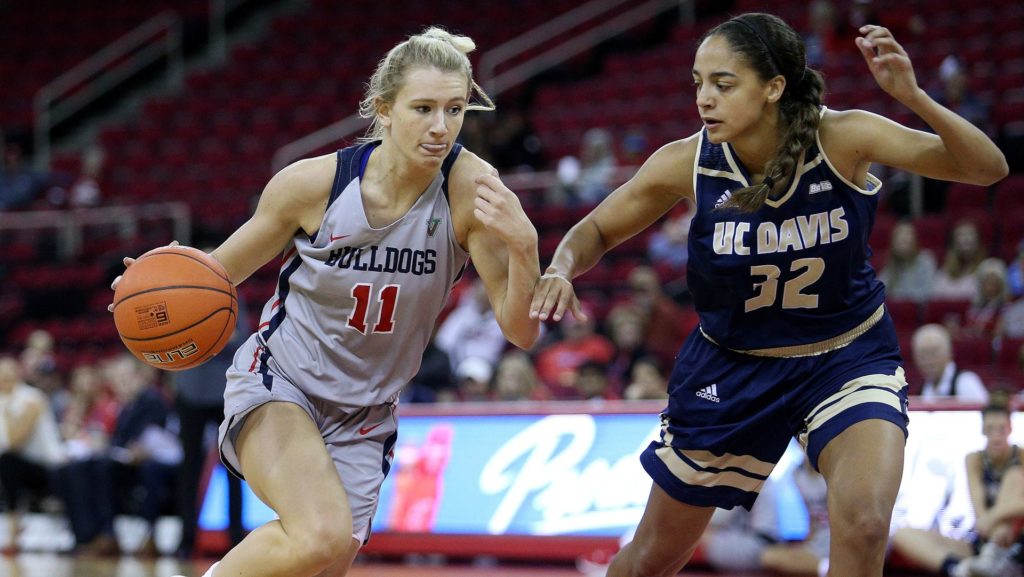 Wednesday’s duel between the Bulldogs and Spartans is being billed as a battle for first place in the Mountain West.

It’s not exactly that, but for the Fresno State women’s basketball team, it’s the most crucial game of the season so far, and the ‘Dogs likely won’t see an opponent this good again until the later rounds of the Mountain West Tournament in March.

“We’re really excited,” said junior forward Maddi Utti. “We are wanting to play in front of a big crowd and play for the Valley, so this is a good chance to do that.”

At 13-0 in the Mountain West, Fresno State holds a 3.5 game lead over the 9-3 Spartans, so the Bulldogs won’t lose their spot as the No. 1 seed. However, it’s an opportunity for the Bulldogs to prove that they are head and shoulders above the rest of the conference.

When the Bulldogs tip off at 6 p.m. Wednesday, they should experience the best atmosphere at the Save Mart Center since Paul George’s jersey retirement ceremony at the men’s game last November.

If the Bulldogs win, they will clinch a share of the Mountain West regular season title.

“That’s the goal,” said head coach Jaime White. “I think we are fortunate that that’s the situation and we get them here on Wednesday. I think our team has played well and has earned that right, clearly with our record, but also, we’ve played hard. We’ve won on the road. We’ve won in places that we haven’t won before, and our kids have been focused on the right things, and we’re excited for the game on Wednesday.”

As much as White and the Bulldogs would like to treat this as just any other game, they know that it’s not. The ‘Dogs will be wearing their green jerseys to honor the Valley, the athletic department has dubbed it “Pride of the Valley night” as the Central Valley and Silicon Valley go head-to-head.

“As much as you want to say it’s just another game, the stakes are higher,” White said.

Freshman guard Haley Cavinder added: “I think we’re telling ourselves that, but I think in the back of our heads we’re all thinking about it. It’s a big game, a big rival game. They’re No. 2 in the conference, so we know that we have to come and show up and play a really solid game to beat them.”

There is also a local connection for the Spartans that will add to the atmosphere. San Jose State juniors Megan Anderson and Danae Marquez attended Clovis West High School in Fresno.

Although the Spartans are in second place, they are not coming into the game on a hot streak. After starting 9-1 – the one loss was to Fresno State – they have lost their last two games.

In the first matchup between the Bulldogs and Spartans on Jan. 4, the Spartans took an early lead, but the Bulldogs battled back to force overtime and win.

San Jose State led 24-11 at the end of the first quarter, but the Bulldogs were not playing poorly at the time, White said.

“That game was funny, because we won every quarter except for the first quarter, so we really just didn’t have a good start,” White said. “And it wasn’t like we played poorly, we just didn’t hit shots early. Our kids know that. We gave them the gameplan, and they understand that we’ve got to really be focused early and make sure that we are defending and knocking down those shots early to start the game right.”

Fresno State did just that in last Saturday’s win against UNLV. The Bulldogs jumped out to an early lead and never looked back, which White said is something that the Bulldogs can push into the San Jose State game.

The toughest challenge from San Jose State comes in defending point guard Ayzhiana and mitigating the impact forward Tyra Whitehead can make with her 6-foot-3 frame.

Basallo leads the conference in scoring, averaging 20.7 points per game. The next three top-scorers are all Bulldogs: Utti and Haley Cavinder are tied at 16.3 points per game and freshman guard Hanna Cavinder is right behind at 15.5.

In the first game, Basallo scored 17 points and Whitehead went off for 22 points and 17 rebounds.

“You’ve got to know where Whitehead’s at,” White said. “You’ve got to contest her shots, and you cannot let her get deep in the paint. But she gets two feet in the paint, or even close – she’s got good range, good length and she can score well. I also think we’ve got to defend her early. She has good energy early and finds the basket early.

“I think we’ve grown since that game. I was excited as I watched film. We’re better now, so I’m excited about that. I think our kids will have an understanding of what her size means and how we have to defend it.”

Junior guard Aly Gamez was named the Mountain West Player of the Week on Monday. She had a career high 27 points against Colorado State on Feb. 5 and scored 14 against UNLV last Saturday.

This is the first time in her career that Gamez has been honored as a player of the week. She is the fourth Bulldog to earn the award this season, following Utti twice and Hanna Cavinder.

One more thing: if fans wear green on Wednesday, they will get in for free.