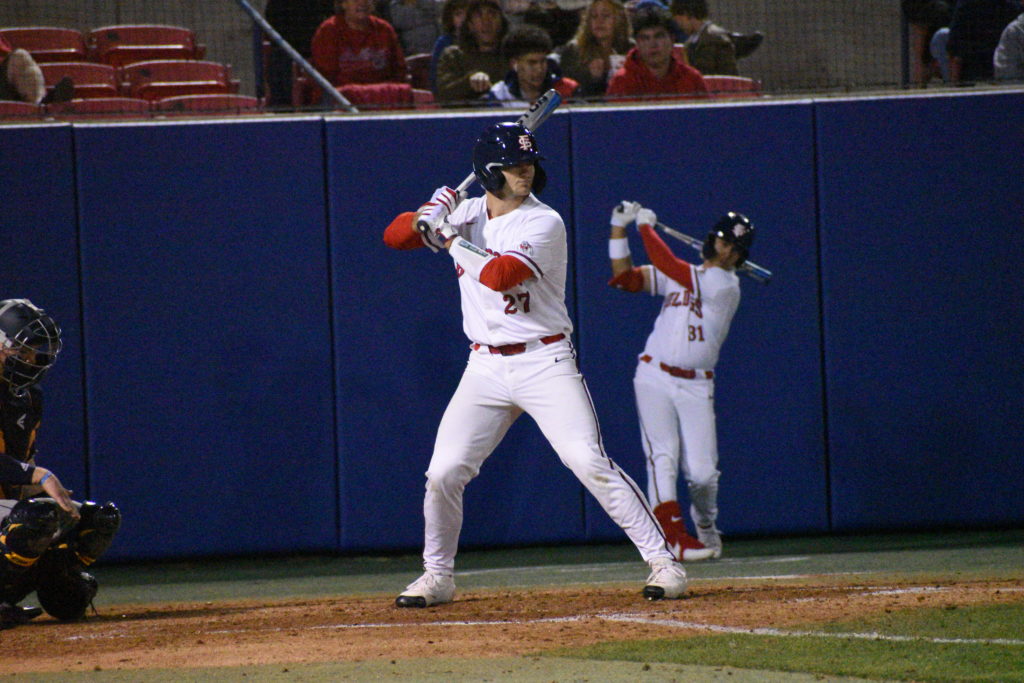 The Diamond ‘Dogs had a tough challenge on opening night: They had to face one of the best pitchers in the country.

They didn’t clog the basepaths and have a dominant offensive performance, but two strong home runs to left field was all they needed against UC Irvine to win 3-1.

UC Irvine starting pitcher Trenton Denholm was an All-American last season and came out firing Friday night. His fastball hovered in the low 90s, and he added a lethal curveball to match.

“Anytime you get a win off a kid like that, you’ve got to fight it out every pitch,” said head coach Mike Batesole. “We really got three pretty good swings off of him. That’s how good he was.”

That didn’t continue into the fourth. Anteaters’ right fielder Nathan Church hit a single up the middle, stole second base a couple batters later and scored off a single to left field by center fielder Mike Peabody.

The Bulldogs answered right back in the bottom half of the inning. Right fielder Nate Thimjon leadoff the inning and blasted a low line drive along the left field line for a home run to tie the game.

“It’s a fastball pitcher. Our plan was fastballs, 2-0 count, that’s what I was looking for and connected with it,” Thimjon said.

Arias came back out in the fifth and pitched a quick inning, retiring all three batters in order.

Fresno State struck Denholm hard in the bottom of the fifth with two outs. Second baseman Andrew Kachel hit a single through the left side of the infield to get on base. Shortstop Jeff Jamison came up and hit a towering fly ball home run all the way to the scoreboard in left field to give the Bulldogs a 3-1 lead.

That was all the Bulldogs needed the rest of the way. Arias pitched threw the sixth inning and the bullpen worked three scoreless innings to close out the win.

Defensively, the Bulldogs had a rough outing and ended up with 2 errors. Fortunately though, the Bulldogs got a pickoff and a double play after each error to prevent them from being costly.

“We’ve got to get better in the infield,” Batesole said. “Jeff made the great play on the double play ball. We asked Jaime on a Friday night to get four outs twice. You’re not going to win a lot of Friday nights when you’ve got to get four outs twice. We were lucky to back that up with a pickoff and a double play. The timing of those were pretty good, but that’s not going to happen every Friday. We’re going to have to clean that up for sure.”

Arias finished with six innings pitched, and he gave up 3 hits, 1 run and had 3 strikeouts. He outdueled Denholm, who made it 5.2 innings and had 6 strikeouts and 2 walks to go along with the 3 runs he gave up.

Fresno State and UC Irvine play the second game of the series Saturday at 2:05 p.m.