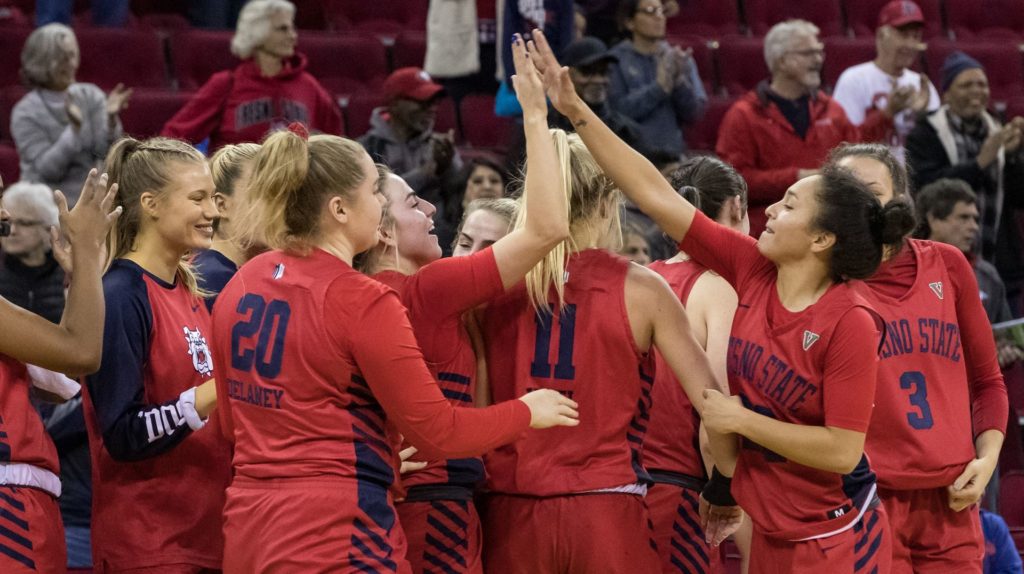 The Bulldogs took care of business on the road, beating New Mexico 84-78 in comeback fashion and blowing out Colorado State 79-61.

The Fresno State women’s basketball team found a way to stay undefeated in the Mountain West – 12-0 – and managed to do so against two teams that usually have a solid home-court advantage.

If the ‘Dogs can defend their home court against UNLV on Saturday and San Jose State next Wednesday, they should finish out the season with ease.

Following this homestand, the Bulldogs only have one more matchup with a winning team: a road game at 11-10 Wyoming to finish out the season.

A perfect, undefeated 18-0 run in the Mountain West is achievable. If they manage to accomplish that, the ‘Dogs will join Colorado State’s 2015-2016 team as the only teams to run the table in the conference.

As difficult as a challenge as that is, it’s fully within grasp for Fresno State, and the Bulldogs can prove that they’re capable of putting together a truly special season by winning the next two games at the Save Mart Center.

UNLV sits in third place at 8-4 in the conference and 12-11 overall and have one loss less than fourth place Boise State.

On a side note for Fresno State, the Rebels and Broncos will ideally flip spots by the time the conference tournament rolls around in March. That would prevent Fresno State and Boise State from meeting before the championship game, which, in theory, would give the Bulldogs their clearest and easiest path to a tournament title.

Fresno State previously beat UNLV in Las Vegas 72-66 back in December. In the first game, the Bulldogs held a sizable lead throughout until the end, when UNLV fought its way back to come within two points. But the Bulldogs – like they’ve been all season – were excellent in the finishing moments and picked up the victory.

Watch out for two players on the Rebels: guard Latecia Smith and center Rodjanae Wade, who scored 19 and 14 points, respectively, in the first matchup. Wade will be returning home – she is a Fresno native who graduated from Edison High School.

Last time around, on Jan. 4, Fresno State mounted a fourth-quarter comeback to force overtime and win 85-76. The Bulldogs struggled to defend forward Tyra Whitehead and guard Ayzhiana Basallo, who scored 22 and 17 points, respectively.

But, in the end, it didn’t matter since Haley Cavinder, Hanna Cavinder, Aly Gamez and Maddi Utti all scored in double digits for Fresno State.

The Spartan’s only other conference loss was out of character for San Jose State – a blowout 80-45 defeat at Wyoming last Saturday.

Ultimately, the Bulldogs should pick up these two wins at the Save Mart Center. If they do, there won’t be much stopping them from completing an undefeated season in the Mountain West.