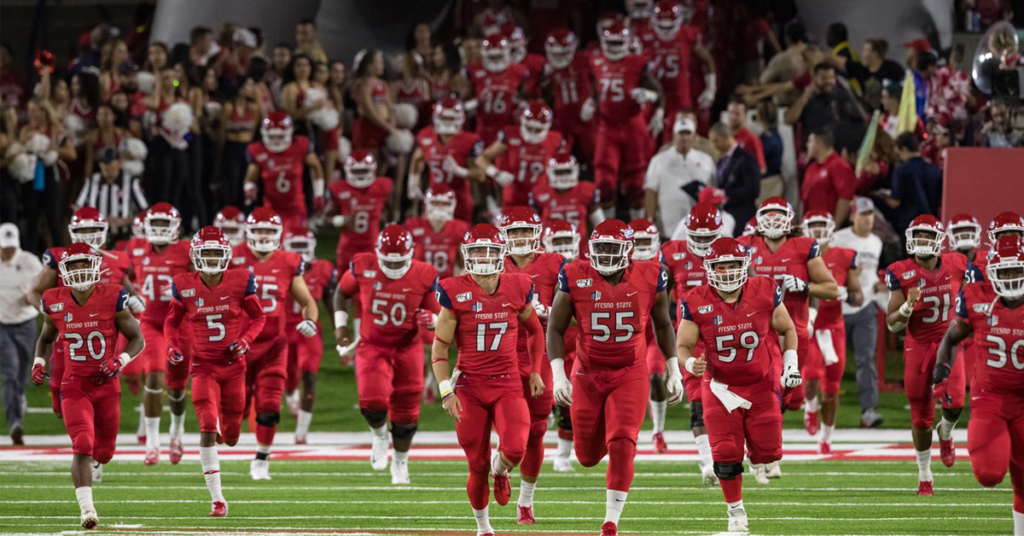 Six games are down, and the Bulldogs are at the halfway point of the season with Colorado State coming to Fresno.

After the tough loss to Air Force a couple weeks ago, Fresno State responded in grand fashion with its biggest win of the season against UNLV.

Now the ‘Dogs have momentum going their way as they prepare to host the Rams, but if not for the team’s ability to refocus and hone in on the small details, the season could’ve been essentially over.

Offensive coordinator Ryan Grubb, looking back to last week, said that there were two roads the ‘Dogs could have gone down.

“You could limp into the UNLV game at home and just kind of bow down to what was going on, or you can bow up, practice harder, work harder, dig in deeper,” Grubb said. “And I thought that’s exactly what the kids did.”

Last week, Grubb talked about how he needed to see more consistency out of the offensive group, and the players needed to focus on finishing every little thing they do. He’s already seen an improvement in that department, and he sees the UNLV win as a potential springboard week leading into the rest of the season.

Grubb has noticed players putting in a little extra effort at the end of practice to focus on finishing the right way.

“I keep trying to preach to them that the growth of a team shows the potential of the big-game wins later in the season, and the implications of postseason play and bowl games are decided with the teams that grow,” Grubb said. “And the teams that don’t grow fall by the wayside and are just non-factors.”

Whether or not the ‘Dogs can take that next step and build on that growth – truly “springboard” their potential to the rest of the season – will be put to the test Saturday against the best pass defense in the conference.

Colorado State is only allowing 177 passing yards per game, nearly 30 yards better than the next best team.

“They play a ton of man coverage, and they do it pretty well, so finding open receivers is much tougher,” Grubb said. “You’re not going to have big zone drop holes, and things like that. You’re going to have to have guys winning in one-on-one routes a lot.”

The most passing yards they’ve allowed in a game was 305 yards against Arkansas. The next highest amount was 232 against Colorado. They held the rest of their opponents to well less than 200 passing yards, including a measly 89 against Minnesota.

While the Rams are sitting next to last in rushing defense, but there are two reasons why that stat doesn’t guarantee the Bulldogs will excel on the ground: Colorado State gave up 436 rushing yards to Toledo which has slightly skewed the overall average, and the defensive line is returning to full health.

Colorado State’s top two defensive linemen are on track to return in time for the game Saturday.

“It will be a big test,” Grubb said. “I think their D-line is really good. I really do. I think their defensive ends are tough kids. We’ll have our hands full for sure.”

In preparing to face that defensive line, Grubb has his offensive line configuration down after losing star left guard Netane Muti for the season.

Since Muti went down in the third game of the season, three players have rotated through the position: senior Nick Aibuedefe, freshman Bula Schmidt and redshirt freshman Jace Fuamatu.

Fuamatu is the starter at left guard moving forward, Grubb said. Although he would only commit to starting Grubb against Colorado State, he did add on, “You hope that solidifies, obviously.” It sounds like it’s Fuamatu’s job to lose.

“I thought he really brought a presence in the run game,” Grubb said. “He’s very physical – hard finisher, he did a lot of really nice things.”

When trying to determine who should be the starter, Grubb said he watched for mental mistakes, good decision making and how they handled the physicality in practice. Fuamatu checked all three boxes.

“If you’re watching a guy and he can’t endure a practice, he sure as heck isn’t going to be able to do it in a game,” Grubb said. “And that was one thing I thought Jace, for a couple weeks now, has really shown that he can be tough throughout practice and bring good energy and focus. And that’s really what it takes. That’s the starting point for a good O-lineman, is just energy and focus. He’s really done a nice job with that.”