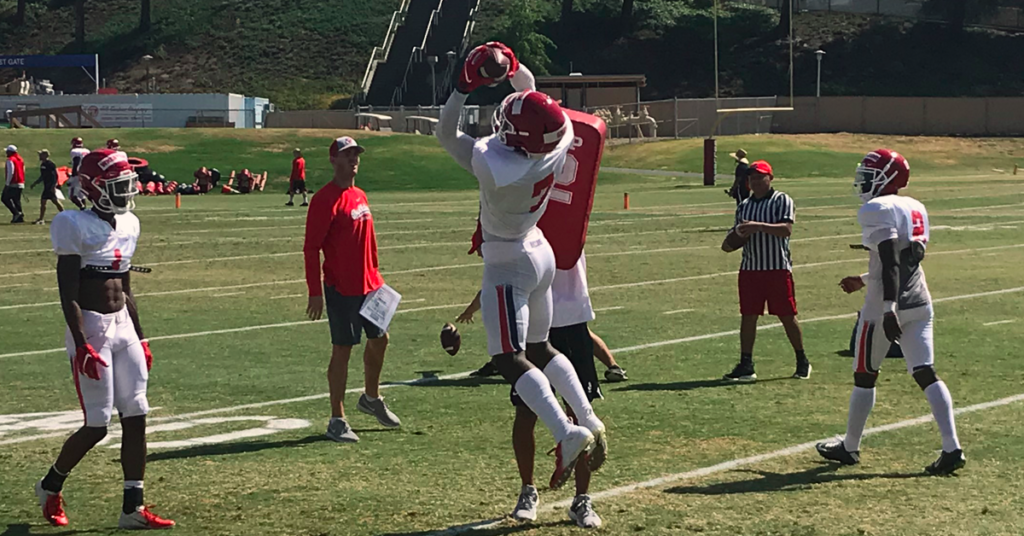 Perhaps one of the biggest losses from last season’s championship-winning Bulldog squad is at the wide receiver position.

Former receivers KeeSean Johnson, now with the Arizona Cardinals, and Jamire Jordan held the position down for years and formed one of the most exciting duos in the nation.

Only one receiver returns with any real game experience: senior Derrion Grim.

Grim, a Stockton native, transferred from Delta Junior College and shared the field with Johnson and Jordan the last two seasons.

Johnson and Jordan were leaders, Grim said, and were always there supporting him. If he ever dropped a ball, they would always back him up and encourage him.

Now it’s up to him to fill their shoes and lead the young wide receiver unit. Grim isn’t backing down from the challenge.

“Now I’m the one that’s got to pick up everybody else,” Grim said. “I’ve got to make sure I stay focused, catch everything and just make a good example.”

Just as the two prolific receivers made names for themselves, Grim said he talks to them regularly and desires to be the best player he can be.

“I just want to do a little bit more,” Grim said. “I tell them all the time, ‘I’m going to one up you big bro.’ That’s just one thing I always want to do.”

Grim has played in 27 games as a Bulldog in his two seasons, totalling 33 receptions for 405 yards and three touchdowns – all of which lead the returning wide receivers.

Out of the 14 receivers on the roster, 10 are underclassmen, including four true freshmen. With the turnover at the position, there’s plenty of room for the freshmen and sophomores to earn playing time.

“For the freshmen, the work ethic is there,” Grim said. “They could do a little bit more. It’s not at 100 percent. They’ll be walking off the field, and they’ll see some of us veterans staying after and doing a couple things, and they’ll turn around and want to do it.”

Grim is leading by example.

He spent about 20 minutes after practice Thursday getting in extra reps with quarterback Jorge Reyna, and he also spent time with the football passing machine working on his reactions at a short distance.

The three receivers that are having a good fall camp so far and push him every day are sophomore Zane Pope, sophomore Patrick Elima-Jeune and redshirt freshman Erik Brooks.

“There’s some days where I’m sitting down after practice, we’re sitting in the dinner room, and I don’t want to do anything,” Grim said. “They’ll look at me, and I’ll look at them, and they’ll move their head like, ‘Come on.’ I’m like, ‘You’re right. Let me get up.’ Even though I’m the leader, they still push me to be an even better leader.”

Earlier in the week, head coach Jeff Tedford talked about how the young receivers have performed so far in fall camp.