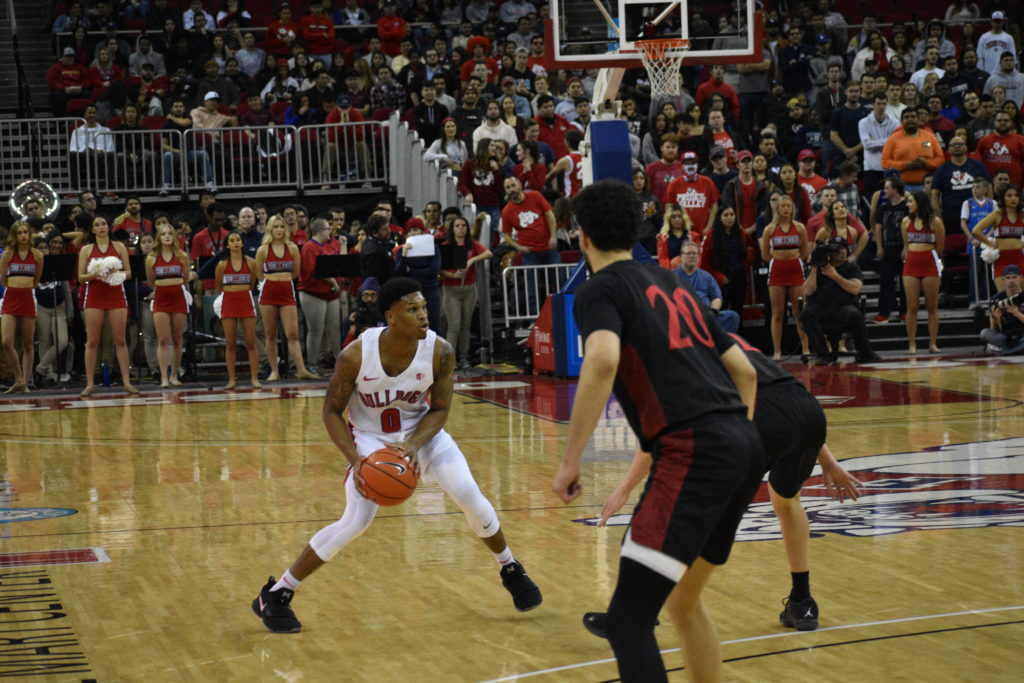 San Diego State – the highest ranked team to ever play in the Save Mart Center – lived up to the hype and extended their undefeated season with a 64-55 win over Fresno State on Tuesday.

The No. 7 Aztecs improved to 18-0 and knocked the Bulldogs down to 5-12 in another game that followed suit with most of the other losses this season.

“I thought we played hard and played pretty good defense,” Fresno State head coach Justin Hutson said. “There were a few breakdowns, but when you’re playing a team of that caliber there’s going to be some breakdowns sometimes.”

Fresno State simply couldn’t produce on the offensive end, often coming up with a stagnant performance. Hutson said that the offensive deficiencies can partly be attributed to the injuries the team has dealt with this season, which has led to inconsistent rotations on the floor.

“You have so many injuries like we’ve had and guys in and out of the lineup and you’re playing different rotations, it’s not going to be very easy to flow,” Hutson said. “But we had enough time this week to flow a little better than we did. Hats off to [San Diego State], they’re a very good defensive team. But when you have injuries that we’ve had, it’s hard to work on that.”

The Bulldogs shot only 36.4 percent from the floor while the Aztecs made 47.1 percent of their shots.

It was a two-man show for the Aztecs between guard Malachi Flynn and Yanni Wetzell, and the Bulldogs didn’t have an answer for either.

Flynn – a dominant player who is regarded as one of the best in the nation – didn’t come off the floor once. He played in all 40 minutes and was the top scorer with 22 points.

Wetzell was right behind Flynn, playing in 36 minutes and scoring 17 points, most of which came in the paint. Although Fresno State forwards Nate Grimes and Orlando Robinson each played at least 30 minutes, neither player was able to stop Wetzell’s relentless finishing near the basket.

Fresno State led for much of the first half, but the Aztecs went on a 7-0 run to head into the locker room, which set the tone for the second half.

After trading baskets back and forth, the Bulldogs managed to pull within 6 points on a fastbreak layup by guard Jordan Campbell with just under seven minutes remaining. But the Aztecs responded with consistent offensive pressure and stifling defense to take a 13-point lead just a couple minutes later.

Campbell – a transfer from Oregon State – made his highly-anticipated home-debut and provided a spark off the bench in the first half. He played a physical and aggressive game, but was ultimately inconsistent making only a third of his shots (5-15).

“Aggressiveness – getting to the basket, a couple times really well,” Hutson said. “A couple ill-advised shots from the outside – good defense. And he’s going to get comfortable, and he’ll learn what a good shot is and what’s not.”

Freshman guard Jarred Hyder was the Bulldogs’ best player in the first matchup a couple weeks ago – he scored 23 points in the 62-51 loss in San Diego – but he wasn’t the same this time around. Although he led the ‘Dogs with 34 minutes played, he only scored 2 points.

Freshman forward Orlando Robinson played a very physical game and led the Bulldogs with 18 points, often serving as the go-to player. Senior guard New Williams heated up at the end to finish with 15 points, but it was too little, too late.

Senior guard Noah Blackwell played in his first game since suffering a knee injury against Utah State on Dec. 7. Hutson kept Blackwell on a minutes restriction, allowing the guard to play a team-low 19 minutes. Blackwell finished with 2 points and did not look fully healthy.

“He’s really fought to try to get back,” Hutson said. “He had a pretty serious knee injury, so it was good he was on a minute count tonight. So we wanted to get him in and out and try to get him comfortable. He was upset with himself, but I thought he played pretty good. He played good defense, had a few turnovers, a few good looks that he will make when he gets back and get[s] in the rhythm.

Fresno State drops to 1-5 in the Mountain West and starts a two-game road trip Saturday against Wyoming.