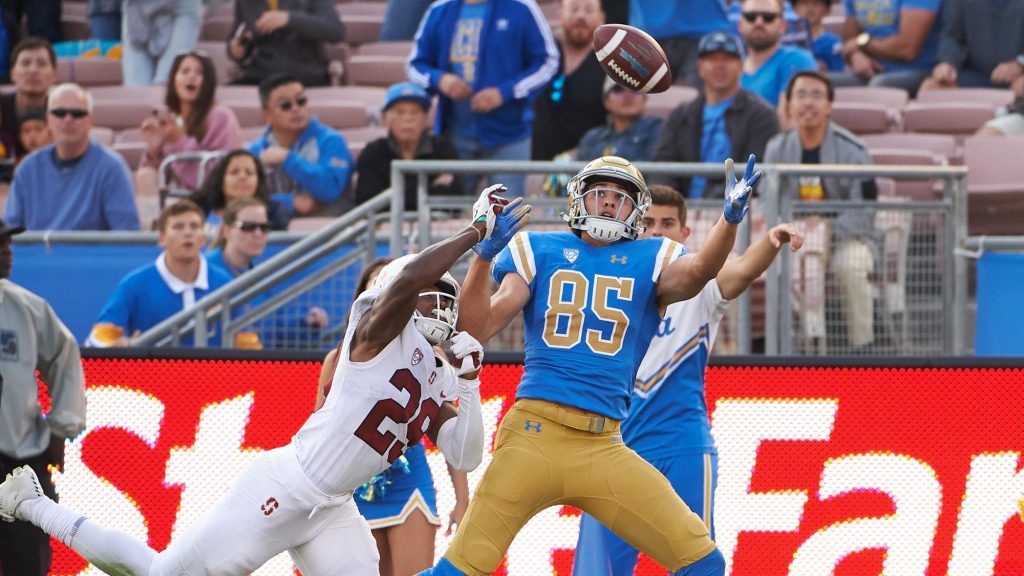 While Fresno State’s defense was stout in the close loss to Oregon a couple of weeks ago, it appears the Bulldogs will need to step up even more in order to knock-off the UCLA Bruins on Saturday.

Looking at the Oregon game, the Bulldogs held the Ducks to 172 passing yards while giving up 186 yards on the ground. More importantly, though, Oregon averaged 3.8 yards per carry. Fresno State’s accomplishment against the run is especially impressive given that Oregon averaged 7.1 yards per rush the following week in a win over Ohio State.

Fresno State will need to build on that performance to beat the 13th-ranked Bruins, a team that Bulldogs’ players and coaches have applauded for their excellent rushing attack.

Earlier in the week, Fresno State Defensive Coordinator William Inge described UCLA as “an offense that is ready to beat you in the head.”

In other words, watch out college football: Chip Kelly’s explosive offense that made him famous in his time at Oregon is back.

Inge praised Kelly – who is in his fourth year in charge of the Bruins – for physically overwhelming LSU in the 38-27 victory a couple weeks ago.

“They’re exactly what you want out of a top-tier college football team,” Inge said. “You don’t see very many weaknesses. They probably see them, but when you see it on film, they do a great job of covering it up. Probably the thing that I have enjoyed seeing from them the most, they’re a fast tempo team where it’s not coming out here playing in t-shirts and shorts. They’re a fast tempo team where you have to have your cleats in the ground, your pads behind you and ready to be able to fit the respective runs and the plays that they possess.”

That physicality all starts with the rushing attack, which opens up Kelly’s offense to operate at full potential. The Bruins piled on 210 yards on the ground against LSU on 47 attempts.

With the run game wearing out opponents, UCLA quarterback Dorian Thompson-Robinson is not having to throw the ball much. When he does, however, he’s making big play after big play. Thompson-Robinson is leading the nation with an average of over 20 yards per completion.

Fresno State Head Coach Kalen DeBoer pointed to Thompson-Robinson’s success off of the play-action, which was all set up by the strong rushing attack.

“I think the quarterback (Thompson-Robinson), from where he was at to where he’s at now is just extremely confident and understands what the purpose is on a play call,” DeBoer said. “You can see even last year just looking at the scores and seeing the close games that they were in as a team, this time has come where they’re getting to the point where there’s consistent play. They’re going to be in every game they play, and now they’re just putting the pedal down, as we saw against LSU.”

A key example of UCLA’s propensity for making big plays came on a 75-yard touchdown pass from Thompson-Robinson to tight end Greg Dulcich against LSU.

Another problem for the ‘Dogs is that Dulcich has the makings of one of the nation’s top tight ends. He racked up 517 receiving yards and 5 touchdowns in seven games last year and leads UCLA with 132 receiving yards so far this season.

“[Dulcich] is a stud,” Inge said. “He definitely reminds me of some of the tight ends that I’ve seen historically at my alma mater, at the University of Iowa, where he is long, he is athletic, he is aggressive. He is great at the point of contact, but out in space – when he is running vertical down the seams, you haven’t seen very many guys that can run with him.”

One of those tight ends who has come through Iowa is San Francisco 49ers’ star George Kittle.

Fresno State safety Evan Williams, who will line up against Dulcich at times on Saturday, compared Dulcich to Kittle for their speed in the open field and ability to rack up yards after the catch as defenses struggle to take them down.

“It all comes down to eye discipline, just being locked into our keys so we can’t let one slip like that,” Williams said when asked about defending Dulcich and the play-action. “Because you see what happens when he gets open, in all that space he can make plays with his feet. He’s a great athlete. Just him having that capability, we’ve got to be even better with our eyes, be even better our scheme and just lock in.”

That’s going to be easier said than done, but given the defense’s hot start to the season, Williams is confident in his unit as they head down to the Rose Bowl for their second shot at a top ranked opponent.

“I’m extremely confident. This team, I feel like we step up to the plate when our name’s called,” Williams said. “Big games like Oregon, we step up to the challenge and we don’t cower away. That’s what we do. I’m feeling extremely confident that we can come in and do what we need to do to get the W because we’ve got a group of guys that are passionate and just willing to get after it every snap to compete.”