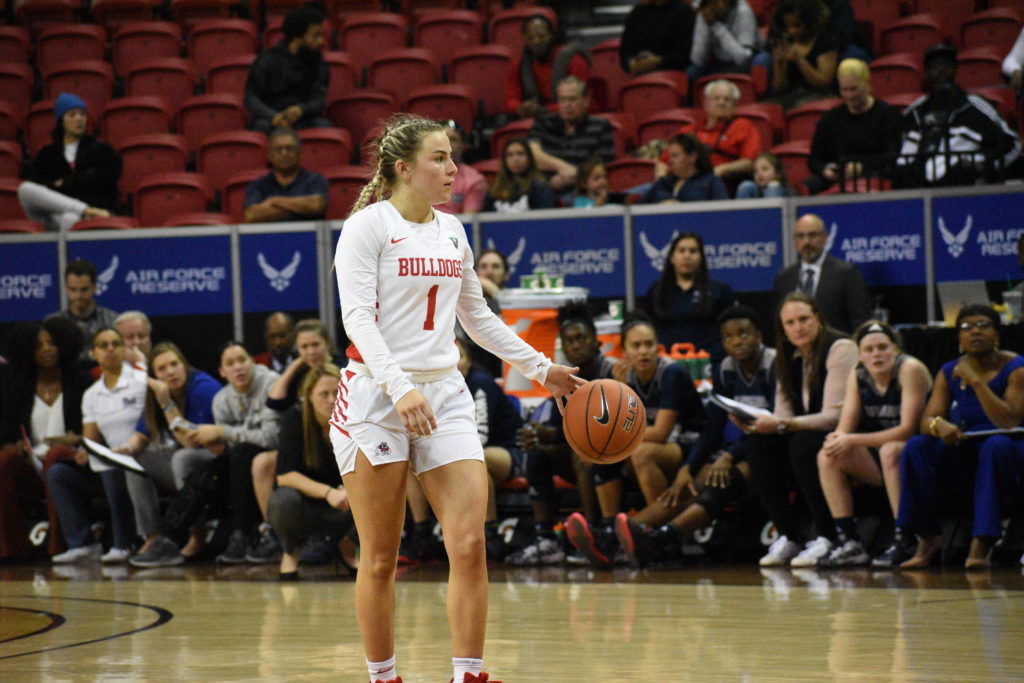 Coming into the Mountain West Tournament as the favorites, the Fresno State women’s basketball team started the week off right with a tough, physical 75-71 win over Nevada on Monday.

Guard Haley Cavinder – who was named the conference freshman of the year on Sunday – was on fire all game on both ends of the court and didn’t step off the court once, posting a game-high 26 points.

She was also the only Bulldog to make a three-pointer, going 4-9 from beyond the arc. The rest of the team never found any luck from three, and the Bulldogs had to force the issue in the paint to win.

“We scored a lot in the paint,” said head coach Jaime White. “I was happy with that. Just one of those games, kind of that first game in the tournament always gets the jitters out. And Nevada had a great win last night, so they were ready to go. I thought we kind of braved the storm and finished strong.”

Freshman guard Hanna Cavinder was second on the team with 16 points and was a driving force – along with guard Aly Gamez and forward Maddi Utti – in creating space in the paint. Fresno State scored 46 points in the paint compared to the Wolfpack’s 28.

“I think we just took what the defense gave us, and I think our teammates did a really good job of just setting the screens and getting us open and working the ball and reversing it,” Hanna Cavinder said.

Defensively, the Bulldogs faced a Wolfpack team that excelled from three-point range – 7-16 from beyond the arc – and also brought a physical toughness inside.

In an effort to counteract Nevada’s physicality in the paint, White subbed in 6-foot-3 forward Brooke Walling just five minutes into the game and played her for over 22 minutes.

“We had to have a bigger presence in there to rebound and to contest, and I thought Brooke did a good job with that,” White said. “Also, she’s quicker at times to move six to eight feet, and we need that in the zone.”

Although the Bulldogs only won by four, they led for over 35 minutes and never really looked like they were in a position to lose.

Ultimately, Fresno State fielded the better, more complete team even though the ‘Dogs never found a way to completely pull away. The Bulldogs didn’t force a blowout, but they did lead by 9 or more points at separate times.

The Bulldogs held a nine point lead late in the fourth quarter, but the Wolfpack quickly made things interesting with just a couple minutes remaining and pulled within three. Like clockwork, Haley Cavinder shined once again and hit a step back three to put the game out of reach.

Gamez finished right behind the twins with 15 points, and Utti – the Mountain West Player of the Year – added 12.

Fresno State advances to the semifinals and will play San Jose State Tuesday at 6 p.m.