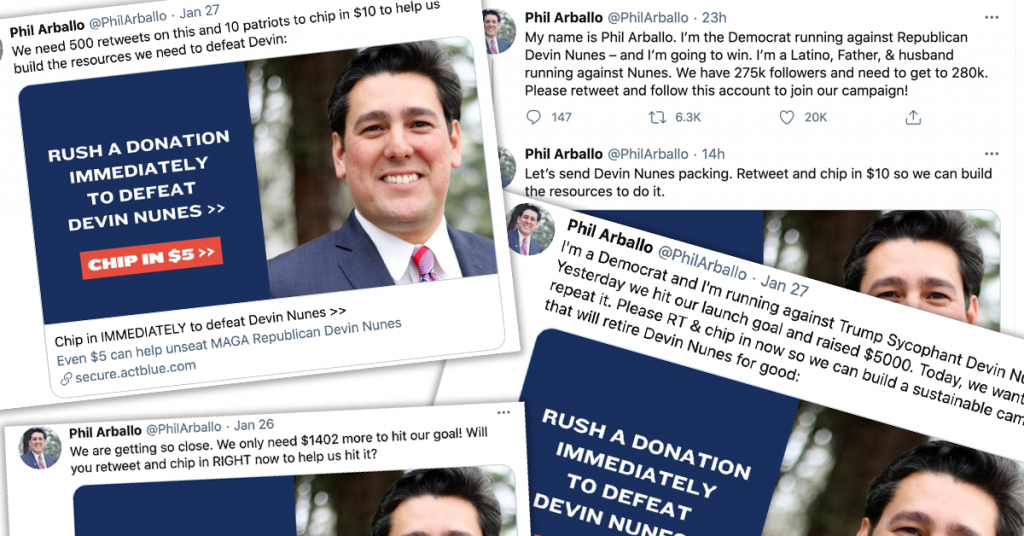 Fresno Democrat Phil Arballo is once again asking for your retweets and cash.

Last Tuesday, Arballo kicked off his second attempt at taking out Rep. Devin Nunes (R–Tulare) with a splashy announcement via Politico California coordinated with a broadcast and cable television ad buy.

Nearly one week later, none of Fresno-Visalia broadcast television stations have reported an ad purchase from Arballo via the Federal Communications Commission.

Elsewhere, Arballo has found himself off to the races.

For the Fresno Democrat, the singular focus of relaunching his campaign mere months after an 8.4-point defeat to Nunes in the 2020 election is singular: fundraising.

His preferred method? A high-caliber barrage of tweets pushing prospective donors to chip-in small dollars into his campaign coffers.

The appeal, usually tied to an arbitrary number of retweets and a recitation that he is the antithesis of Nunes, is apparently wearing thin on activists.

Locals, Valley Democrats, and former 2020 primary opponents of Arballo couldn’t help but poke fun at Arballo’s fundraising tactics to gin up interest in an attempted ouster of Nunes or painting it as a naked attempt to make money.