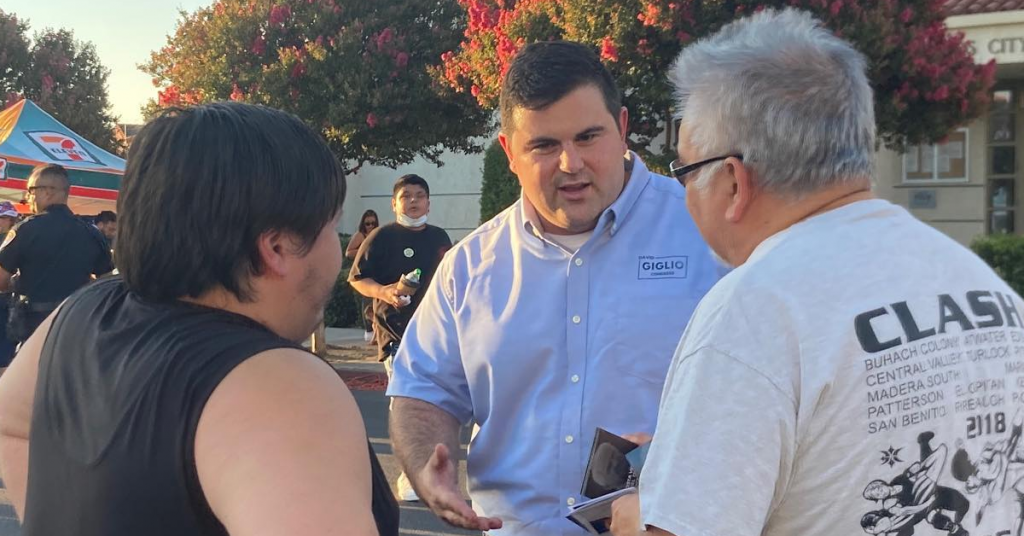 Though new district lines are still months away from being set, small businessman David Giglio, a Madera Republican, has long been campaigning to oust Rep. Jim Costa (D–Fresno).

Giglio lives in the Madera Ranchos, where he moved with his wife from Connecticut four years ago, and he owns a sports card and collectible shop in Clovis.

In a conversation with The Sun, Giglio said the central San Joaquin Valley needs a new face in Congress to end the lengthy-tenure of what he described as a “career politician” in Costa, who was first elected in 2004.

“I think that it’s time that we get people that really want to go there and put the needs of their constituents above all else,” Giglio said. “I think a lot of people are tired of career politicians, and we need some people that want to step up and want to do the job and want to do right by their constituents. I want to go there and I want to get things done. I’m not running for Congress to be a career politician, I’m running there because I want to help the people of the Valley.”

While Costa has long positioned himself as a moderate or “Blue Dog” Democrat, Giglio feels the eight-term Congressman has become out of touch with his constituents, pointing to his voting record in 2019-2020: 99 percent of the time with House Speaker Nancy Pelosi (D–San Francisco) and 91 percent of the time with the Democratic party’s socialist wing, led by Rep. Alexandria Ocasio-Cortez (D–N.Y.).

That voting record is not congruent with Costa’s membership of the Blue Dog Coalition, Giglio said, adding that Costa is “extremely far left now.”

“He can claim to be a moderate, but voting records don’t lie,” Giglio said. “And I don’t believe that the Valley is a socialist valley or supports these types of policies, so I think he’s just lost touch with the Valley. He talks about being a farmer, and he hasn’t really delivered any substantial help to our farmers in 16 years. So I think it’s more than time for a change.”

Despite the fact that Costa won reelection last year by over 18 points, Giglio feels that there is a “huge opportunity for a conservative Republican candidate” to win with a grassroots campaign.

The reason? The government’s alternatingly heavy- and ham-handed response to the coronavirus pandemic during the past 18 months.

Those lockdowns and regulations helped propel Giglio to take action and throw his hat in the ring for Congress.

Giglio’s uncle – who was like a second father to him – passed away in unexpectant fashion last year.

The State of Connecticut only allowed six people to attend the funeral, which was nowhere close to the proper farewell that his uncle deserved, Giglio said.

“Nobody should have to go through that. I think it’s a shame that a lot more people than just me had to experience something like that during the pandemic and then watch on TV as sometimes these rules seem to be arbitrary in certain cases. Gov. Newsom had his rules, and then he’s out there dining at the French Laundry,” Giglio said.

“You see examples of this all the time – riots and mass protests going on and being actively encouraged, and then people are told ‘you can’t meet with your loved ones, you can’t go see your grandmother in the nursing home.’ That’s just not right. That just didn’t sit well with me, and I think it’s a gross abuse of governmental power.”

If Giglio gets elected, he plans to advocate for Valley farmers as California is in the midst of another water crisis.

Giglio said the water problem at the federal level is due to overregulation, with agencies like the EPA exerting their power to determine where water is delivered.

“We hear about drought, and we hear the governor, and we hear the Biden Administration talk about how climate change is the cause for not having water. But that’s not true. Two of the last four years were some of the wettest on record,” Giglio said. “Our water infrastructure in California was built to withstand five years of drought. We’re not nearing five years yet, and we’re in a crisis, because that water’s being pumped out to sea.”

He also said he would focus on fighting with the other Central Valley Republicans to help complete water storage projects such as the Temperance Flat Dam.

To go along with his approach to deal with the water crisis, Giglio spoke about his desire to secure the border and promote legal immigration.

Two other top issues for Giglio are education – he was a former high school history teacher – and jobs.

“We need to empower our teachers. We need to empower our local communities, and we also need to look at things like school choice, because I believe that no kid should be denied the right to a quality education because of geographical boundaries and where they’re born,” Giglio said. “Parents should have the right to send their kids to a school that is going to get them the education that they deserve.”

On the topic of jobs, Giglio noted the struggles that many small businesses, like his own, have had to deal with over the course of the pandemic.

“We need to give more support and lower taxes and lower regulation on small businesses so that they thrive, because they are the backbone of America,” Giglio said. “And it’s a shame that during the pandemic, a lot of them didn’t make it. We need to make sure we give support to the ones that do.”

Currently, Costa’s district encompasses Merced and Madera counties and includes western Fresno County and the southern portions of the city of Fresno.

As it stands, Giglio has additional Republican competition to oust Costa in the form of attorney Nathan Brown, who formally launched his candidacy last week.