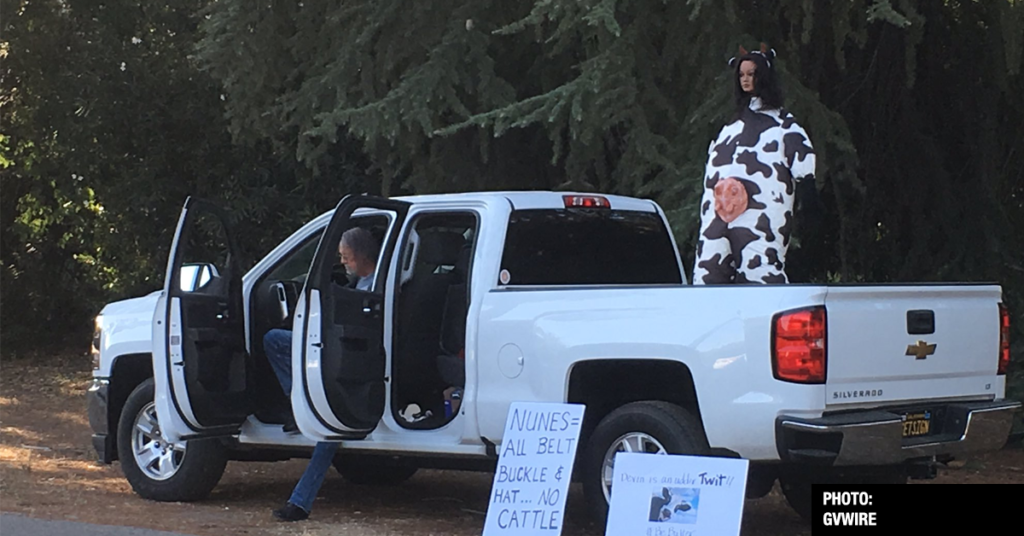 A much-ballyhooed appearance and talk by Rep. Devin Nunes (R–Tulare) on Wednesday seemed to be another ripe opportunity for detractors to voice their displeasure at the Tulare farmer-legislator.

With the location of the Fresno County Republican Party’s Lincoln-Reagan event, Sunnyside Country Club, being leaked earlier Wednesday morning, it appeared highly likely a crowd of boisterous protesters would arrive.

Instead, the typical crowd that weekly gathers outside Nunes’ Clovis office to protest was reduced to two protesters, a man and woman, and a cow-clad mannequin.

In the bed of the pickup was a mannequin in a cow suit akin to those sported by rather unfortunate Chik-Fil-A employees.

Thankfully, in the sweltering 105 degree heat, no protesters were harmed in the making of the bovine protest.

Due to security threats stemming from his post on the House Intelligence Committee and leadership of the investigation into Russian meddling in the 2016 election, Nunes has often kept details close to the vest on scheduled public appearances away from Washington.

Across town, the three challengers hoping to square off against Nunes participated in a candidate forum at Fresno County Democratic Party headquarters in downtown Fresno.

Editor’s Note: An earlier version of this story misidentified a Fresno Bee reporter as a protester. It has been updated to reflect that the second protester was a woman.