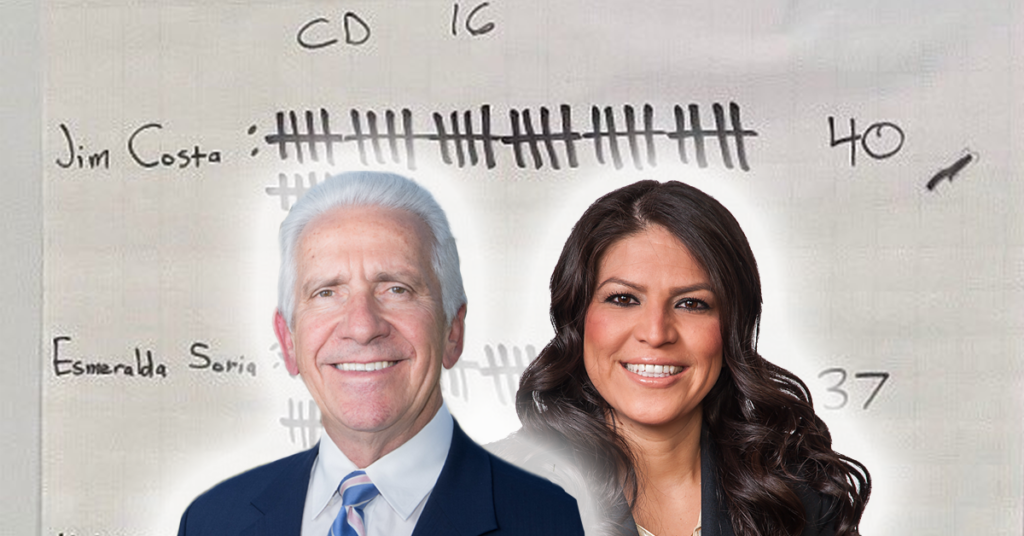 The March Primary is five months away, but an intra-party squabble over a fairly safe Democratic Congressional seat has largely just begun.

During a pre-endorsement meeting in Merced on Saturday, Valley delegates to the California Democratic Party were deadlocked in voting Saturday to endorse a candidate for the 16th Congressional district, currently held by Rep. Jim Costa (D–Fresno).

In two ballots, Costa maintained a slight edge over Soria among local delegates.

In a second verification ballot, only one delegate – who had previously voted for Costa – abstained. Costa led the second ballot with 39 votes to Soria’s 37.

California Democratic Party rules require a candidate capture 70 percent or more support from regional delegates to earn the party’s pre-endorsement ahead of its endorsement convention.

In order for a candidate to be under consideration for an endorsement without pre-endorsement, he or she must have acquired 50 percent or more of the vote during the pre-endorsement process.

With neither Costa nor Soria earning 50 percent of the vote, the California Democratic Party will not be able to issue an endorsement, party rules state.

In blocking Costa from receiving the party’s pre-endorsement and foreclosing any endorsement ahead of the March Primary, Soria’s camp declared victory for her up-start campaign.

Beyond serving with Costa in Congress, Cox has a close relationship with Soria. Cox and Terance Frazier, Soria’s boyfriend, were business partners and served as officers in a Fresno-based sports nonprofit. Cox exited as the nonprofit’s treasurer in the spring of 2019 as part of a divestment from various corporate entities.

Saturday, Sources told The Sun that Cox, a delegate in the region, voted for Costa to receive the party’s endorsement over Soria.

Alejandro Carrillo, the Democratic Party’s region director for the northern San Joaquin Valley, could not verify a Cox vote as he mailed ballots to the state party following the meeting.

The California Democratic Party endorsement process has often not been kind to insurgent candidates from the San Joaquin Valley over their establishment counterparts.

One key example was the primary battle between Fowler Mayor Pro Tem Daniel Parra and Bakersfield attorney Emilio Huerta in 2016.

The pair both ran to face-off against then-Rep. David Valadao (R–Hanford).

Parra won the party’s pre-endorsement early in the 2016 campaign season. Huerta then forced a caucus vote on the endorsement at the California Democratic Party convention.

In that vote, Parra scored another victory – winning support from 66.6 percent of caucus delegates.

Huerta then gathered signatures from delegates to force a floor vote in front of the entire California Democratic Party.

By the end of the convention, the statewide delegation voted to strip Parra’s endorsement and neither candidate had the imprimatur of the party going into the June primary against Valadao.