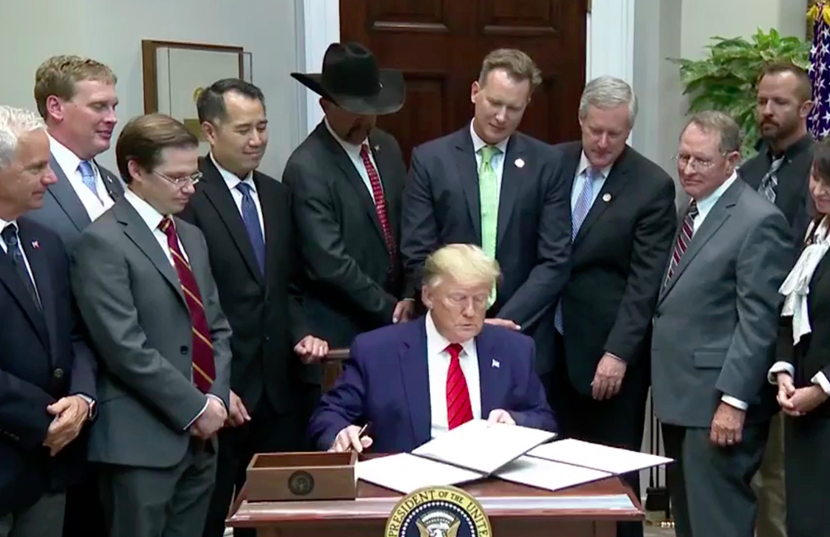 On the agenda for Trump: a push to increase transparency by Federal agencies on regulations and guidance documents.

“For many decades, Federal decades have been issuing thousands of pages of so-called ‘guidance documents,’ a pernicious kind of regulation imposed by unaccountable bureaucrats in the form of a commentary on how rules should be interpreted,” Trump said. “All too often guidance documents are a backdoor for regulators to effectively change the laws and vastly expand their scope and reach.”

He added: “Guidance has frequently been used to subject U.S. citizens and businesses to arbitrary and sometimes abusive enforcement actions.”

In a statement issued after the order signing, Borgeas said it was a good opportunity to discuss issues affecting small businesses and the Valley’s ag industry.

“I am honored to have the opportunity to discuss ways to foster economic growth, scale back on government overreach, and support small businesses and agriculture.”

“All too often we see ‘one-size-fits-all’ regulations remain in place for decades without any change or current application,” Borgeas said in a statement. “Giving individuals and businesses the ability to give input about their experience or circumstances is a step in the right direction and may help to foster better regulations.”

Ahead of Trump signing the order, a few invited business owners spoke of arcane Federal regulations that either forced their businesses to close or added immensely to the cost of doing business.

Businesses and individuals learn of these rules “only when federal agents come knocking on their door,” Trump noted.

Trump described the current regulatory environment as “permanent bureaucracy” and said that it “could not become a fourth branch of government, unanswerable to American voters.”