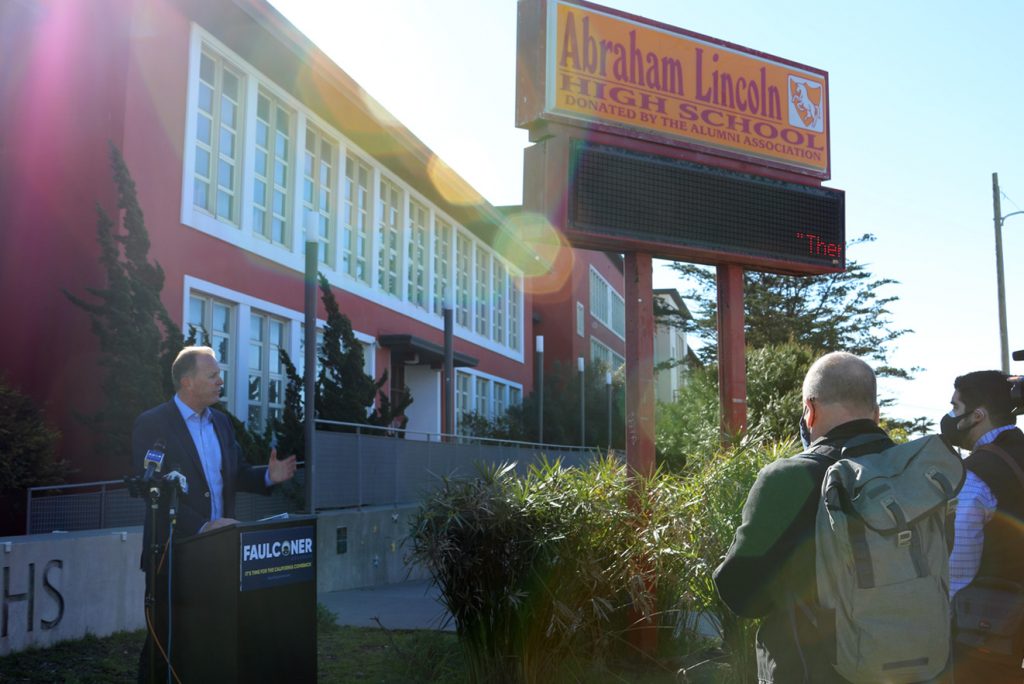 Former San Diego Mayor Kevin Faulconer is on the warpath to lock down California’s Republican Party.

From there, then it’s on to California writ large.

As the Golden State’s Republicans begin a three-day digital convention to elect its chairman and other senior officials following a string of Congressional victories in 2020, Faulconer is fixing to consolidate support for his bid to knockoff Gov. Gavin Newsom via the impending recall.

The message, to borrow from the film Highlander: “there can only be one.”

Faulconer isn’t alone in that pursuit, but his approach appears to be the one catching eyeballs.

Between cable news hits and a parachuted appearance in San Francisco to chastise local school board members for moving hastily to rename schools after Abraham Lincoln rather than working to reopen the campuses.

It served as an extension of the line of attack Faulconer has prosecuted since jumping into the race: Newsom’s inability to get California’s schools opened.

“The momentum is off the charts for the recall, first and foremost,” Faulconer said in an interview with The Sun on Friday, citing Newsom’s fits and starts at reopening schools.

In the meantime, he’s had to contend with internal political battles among the state GOP.

For starters, Newsom’s 2018 opponent – businessman John Cox – is back for another crack, announcing then relaunching his candidacy after Faulconer’s entrance.

Since the start of February, Cox has alternated attacks against Newsom and Faulconer.

Then there’s former acting Director of National Intelligence and U.S. Ambassador to Germany Richard Grenell, who is reportedly weighing a bid amid the recall.

The polling report adds that the split of Republican votes in a three-Republican field between Faulconer, Cox, and Grenell would render the recall a pointless political exercise, handing control of the Governorship back to Democrats.

“It really demonstrates the strength of our candidacy,” the former San Diego Mayor said on Friday. “As someone who was elected twice in a Democrat-majority city, I not only know how to win, I know how to govern. I think that’s incredibly important at this time in California.”

“I strongly believe that because of the ineffectiveness of Newsom that people are looking for the candidate who has the experience and can build a coalition of Republicans, Democrats and independents to win.”

Thursday night, ahead of the start of the California Republican Party Convention, Faulconer rolled out a digital advertisement dubbed “Divided We Fail” taking direct aim at Newsom and seeking to coalesce Republicans to his cause without addressing either of the two prospective GOP candidates.

California gives its citizens the right to recall a governor when he isn’t getting the job done. Replacing Newsom is going to take all of us working together. pic.twitter.com/TTmfQxZAkj