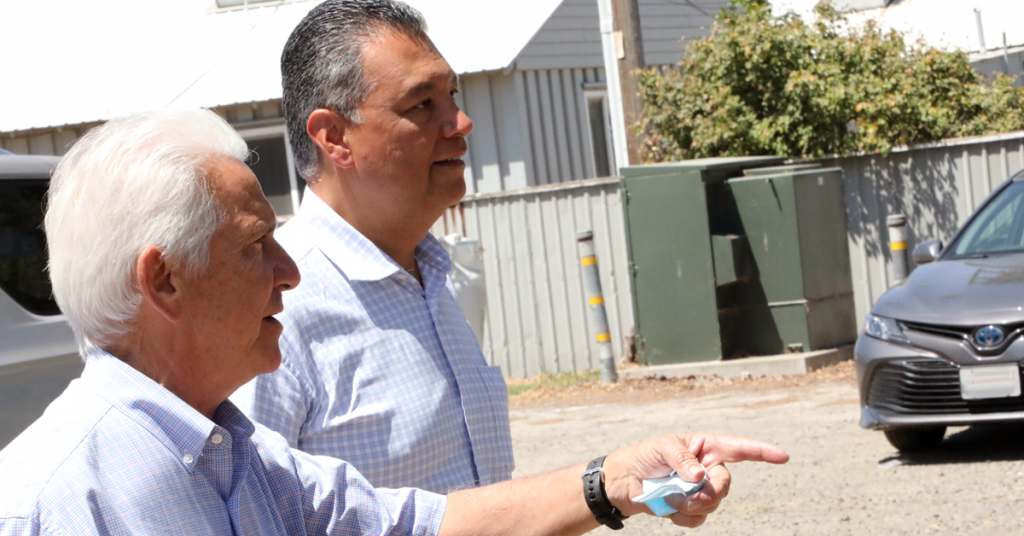 The community of Dos Palos is pinning their hopes of restoring consistent supplies of clean water on action in Washington.

For Rep. Jim Costa (D–Fresno) the calls from neighbors who had their taps turned off last June amid scorching temperatures and algae backlog served as a much-needed alarm for change in basic water infrastructure.

It’s arguably the tip of the spear in his slate of Community Project Funding requests (formerly known as earmarks) for the current appropriations season.

Friday, Costa arrived at the current water treatment plant in town with a VIP in tow– the state’s junior Sen. Alex Padilla – as part of a fact-finding tour.

Padilla, who was a frequent flyer in the San Joaquin Valley as California’s Secretary of State, made his debut Senatorial swing through the region as a reintroduction of sorts.

“We are the richest country in the world,” Costa said at a press conference before touring the to-be-retired water treatment plant. “And to have cities like Dos Palos, where their water system shuts down or they can’t meet federal or state drinking requirements is simply unconscionable. Period.”

Gray, meanwhile, pointed to a more global issue facing the region and the Golden State.

Padilla, whose appointed term began amid the cloud of the coronavirus pandemic, hasn’t had many opportunities to navigate the fraught battles over water in the Golden State.

Speaking to reporters on Friday, Padilla said that he and Senate Democrats were focused on supplementing the bipartisan infrastructure framework struck by Senate negotiators with the Biden administration with additional spending on a wider array of infrastructure needs, including water.

Padilla, whose visit to the region came as part of an on-going listening tour related to infrastructure, pointed to a tour of Del Bosque Farms on the westside of the San Joaquin Valley as underscoring the assessment of California’s growing needs post-pandemic.