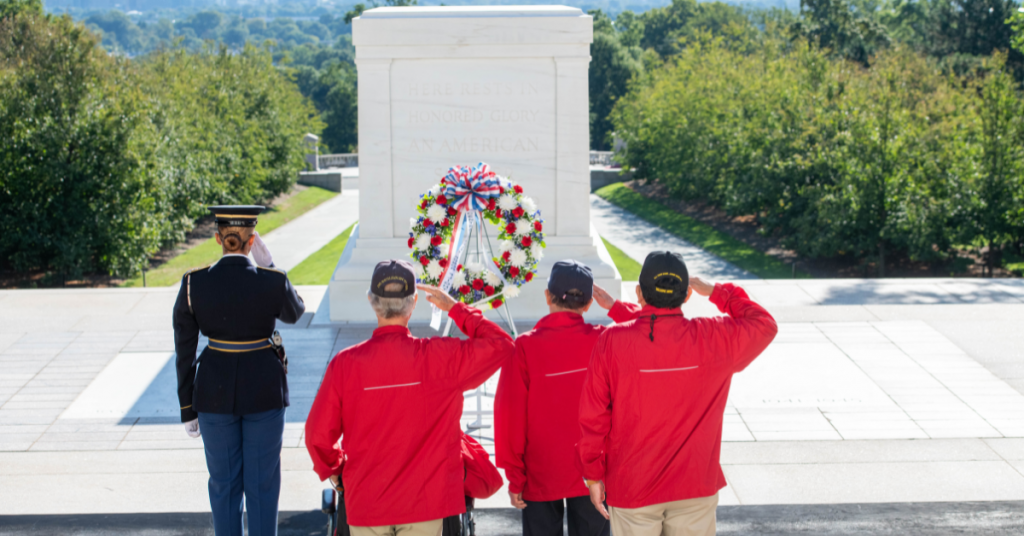 Day Three of the 22nd Central Valley Honor Flight proved to be another emotional one as a visit to the Tomb of the Unknown Soldier at Arlington National Cemetery took center stage Wednesday.

During the banquet the night before, the 67 veterans on Honor Flight were treated to a talk from John Gallagher, a former guard at the Tomb of the Unknown Soldier and the nephew of Harold Gallagher, an 86-year-old Army veteran from Fresno who was on the trip.

Gallagher set the stage for the veterans for what they would see Wednesday, calling the tomb the memorial that gives reason to all other memorials.

“Serving in the Old Guard at Arlington National Cemetery was really a highlight of my career. Now that I’m a little bit older, I realize that it is the ultimate sort of symbol of citizenship. And we honor them, the Tomb of the Unknowns, the unknowns, because they didn’t come home, and they’re known but to God,” John Gallagher told the veterans.

“But every veteran in this room on this Honor Flight raised their hand at one point and said, ‘I’m willing to go serve in harm’s way for a nation filled with mostly strangers I don’t even know to preserve that way of life and preserve freedom. And if I don’t come home in the process, I’ll still be willing to make that sacrifice.’ And that makes every one of you equal to the valor and bravery and noble service of those who you will see honored tomorrow.”

John Gallagher’s talk rang true Wednesday as the veterans attended a changing of the guard and a wreath laying, which some of the veterans participated in.

The veterans also visited the grave of World War II hero Audie Murphy, one of the most decorated soldiers in history.

“I got tears in my eyes at Arlington,” said Bud Gantney, 76, from Merced.

Unlike most soldiers, he was drafted at the age of 24 and already had made a name for himself in Merced as a butcher and grocery store owner.

“I had a new Corvette, new TV,” Gantney said. “I was a rich kid when I got drafted.”

The draft took him to Vietnam, where he was older than all of his commanding officers and was quickly nicknamed butcher for his previous career, even though he served as a medic in Vietnam.

In 1971, however, he was whisked away from Vietnam after his former grocery store partner passed away. The partner’s wife went to the Red Cross and requested that Gantney be allowed to return to Merced.

“Somehow they talked them into letting me come home in a middle of a firefight,” Gantney said.

That firefight was the siege of Firebase Mary Ann, the deadliest attack on a U.S. firebase during the Vietnam War which resulted in 33 deaths and 83 wounded.

After decades of continued military service in the National Guard and Army Reserve, he now owns Johnson Industrial Plumbing in Merced and still works today.

Gantney’s daughter Danica was his guardian on the trip and shared her observations of her father and his fellow veterans on Honor Flight.

“It’s been so inspiring listening to their stories. Having them just meet each other and have that same compassion for everyday living, and to hear how their lives have changed after their events, what their kids do, what do your grandkids do, do they know what you did? Just hearing those stories is amazing,” Danica said.

“Having a bus ride with them has been the best bus ride ever. Walking around and you’re hearing stories from different people, it’s been a huge experience just for us.”

After the somber trip to Arlington National Cemetery, Honor Flight visited the Air Force Memorial overlooking The Pentagon and made its last stop of the trip at the National Museum of the Navy before returning home to Fresno, where the veterans received the welcome home that many of them missed out on when they returned from war.

That welcome home capped off an emotional few days of the 22nd Honor Flight, bringing tears to the eyes of the veterans as they were greeted by hundreds of community members lining the terminal.

The 23rd Central Valley Honor Flight is scheduled for October, and the 22nd Honor Flight was made possible by a $200,000 contribution from Eagle Mountain Casino.

Honor Flight organizers said each flight costs around $200,000, and the goal is to take four trips to Washington D.C. next year.