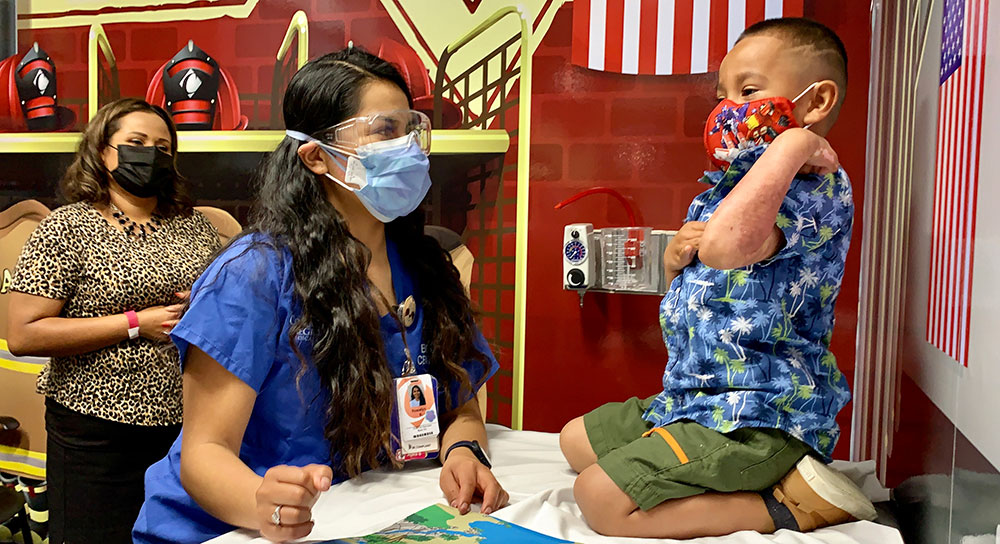 It was Christmas Day, with cousins playing tag and extended family cooking together outside over an open fire, when the unthinkable happened. Four-year-old Matthew Perez tripped and fell into a huge cooking pot cooling on the ground.

One arm, his shoulders and part of his chest were severely burned while the family was visiting on a ranch in rural Mexico, hours from medical care.

“We were faced with what to do. Do we leave? Do we try to get treatment down there?” says Matthew’s mother Anavel Perez. Even though family urged them to stay, by the next day Anavel knew the best place for her son would be at the burn center back home.

The family got an emergency flight back to San Jose and drove Matthew to Community Regional Medical Center as quickly as they could. “Matthew already had a high fever,” explains Anavel. “They started treating him in the emergency room and it made me at ease. I knew I was in the right place.”

Within 48 hours of his accident, Matthew arrived at Community Regional, home to one of 17 burn centers in California and the only one between Los Angeles and Sacramento with both inpatient and outpatient services. Serving a 15,000-square-mile region, the Leon S. Peters Burn Center treated 683 patients in 2020, and 37% were children.

“Matthew sustained deep second- and third-degree burns that required hospitalization and surgery,” describes Shana Henry, RN, a clinical supervisor in the burn center. The blistering, painful wounds had affected several layers of skin on nearly 10% of the little boy’s body.

Burns that exceed 30% of a person’s body can be potentially fatal, according to the National Institutes of Health, and even a serious burn on just 10% of the body requires treatment at a specialized burn center like Leon S. Peters Burn Center. The hospital’s pediatric burn team employs a diverse team including burn surgeons, burn nurses, a child life specialist, child psychiatrists, social workers, pharmacists, occupational and physical therapists as well as pediatricians, burn nurses and burn surgeons.

The Perez family was grateful to be surrounded with that kind of expertise. “Having the burn center here, I can’t say how blessed we are to have that for Matthew,” says Anavel, “especially knowing he was going to be admitted and get the treatment he needed with skin grafts.”

“We were able to use the spray-on skin with Matthew and we were able to discharge him in half the time we normally would for usual skin grafts,” says Henry. “Research shows patients heal faster at home with their families. With RECELL, patients get their pigment back faster and they heal twice as fast and we’re able to get them out of the hospital faster. For Matthew that meant being able to sleep in the comfort of his own bed and see his siblings.”

RECELL uses a small sample of a patient’s own healthy skin to produce a spray solution of cells within 30 minutes that can cover an area up to 80 times larger and regenerate a new outer layer of skin. Traditional skin grafts require taking large amounts of a patient’s own skin or using donor skin or pig skin to cover wounds and promote healing. RECELL uses a much smaller skin sample and doesn’t require repeated skin grafting, which can be painful.

“This technology was approved in 2019 and we started using it in 2020 and now we’re one of the highest users in the U.S., among the top 3 for this technology,” Henry says. “By using this technology we’re able to discharge people from the hospital faster. And our burn survivors have expressed they have less itching and less scar formation. We know the faster we heal a burn wound the less likely we have scar formation. We have lots of success stories and Matthew is just one of those.”

Anavel has been thrilled with her son’s progress: “I can’t imagine what it would be like if he didn’t have that treatment. Now it’s just a matter of getting his skin color back … He’s had the best care and he won’t have a disability because of the way they treated him. And his mental stability is better because they know how to treat children.”

Having a child life specialist as part of the care team has made all the difference in how Matthew reacts to his regular visits back to the burn center to change his bandages, work on physical therapy and check his progress.

Anavel says that Rosielyn Rufo, a child life specialist in the burn center “has been there to help me and to help him while he’s being treated to take his mind away from things. He’s just playing and not thinking about what’s going on. I’ve picked up some great tips from her because I had to learn how to do some dressing changes at home.”

Rufo has a bag of distractions for boys Matthew’s age that includes dinosaur stickers, stress balls and a Bubba Bear. When she first met Matthew he was scared and in a lot of pain. “His mom was emotional as well, knowing he was in pain,” she describes. “I was able to be a supportive presence when he felt a lot of control was taken away” because he had to be in a hospital away from family.

It took a few sessions and reassuring messages before Matthew was able to relax and play. “I was reinforcing messages to him that this was not his fault and he was not in trouble, and he’s here to get better,” Rufo says. “I got to know him over a few visits and now know he loves ‘I Spy’ books and he likes Spiderman and Ninja Turtles and cars. He gets easily distracted by those and is able to concentrate and talk to me while the nurses are working on his dressing changes.”

Matthew is nearly back to his normal self, playing with his siblings again. “Seeing him playing really motivates me to do whatever we can to get him better again. His smile …,” Anavel says stopping to choke back happy tears. “I know it can be taken in a blink of an eye. We’re grateful that he’s here every day when we get up and he has that energy again.”