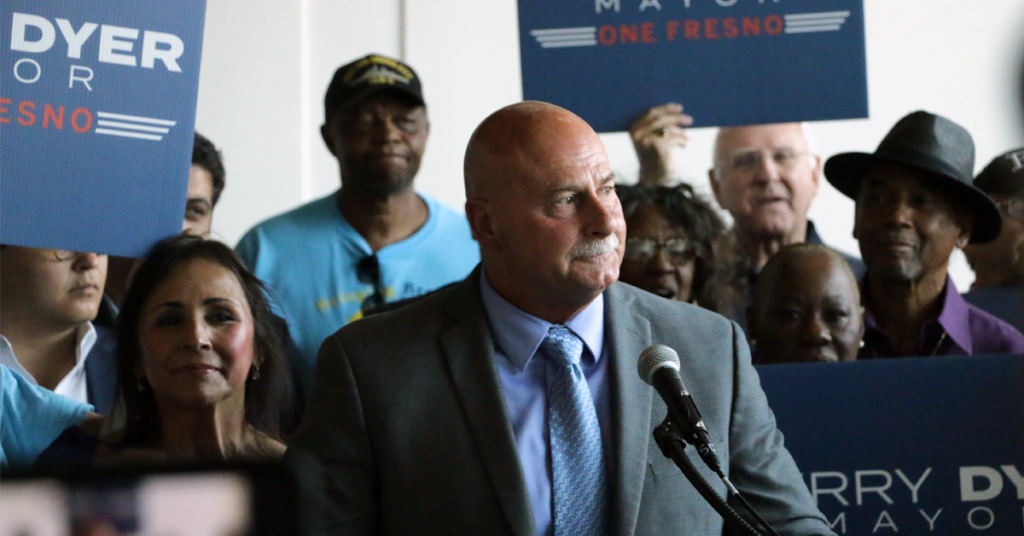 The former police chief sealed up an electoral victory in the March Primary. But for heavy involvement in the city’s coronavirus response, he’s run a low-key transition into office.

Behind the scenes, however, he’s set to remake Fresno City Hall’s administrative team.

Esqueda who, until July, served as Fresno State’s Associate Vice President in Water and Sustainability is an old hand in municipal government.

Prior to his stint at Fresno State, he was Fresno’s water wizard who led the nearly half-billion-dollar Recharge Fresno program to improve water delivery and storage.

Midway through his tenure as Public Utilities director, Esqueda navigated an ensuing crisis as a large share of Northeast Fresno homes and businesses underwent a bout of discolored water due to the impacts of treated water with aging galvanized iron pipe.

Meanwhile, the Mayor’s office itself is undergoing a massive change under Dyer.

Only one senior Mayoral advisor – chief of staff Tim Orman – will remain in his post.

Meanwhile, Dyer is bringing a handful of new faces into City Hall to staff him.

Matthew Grundy, the current CEO of Fresno’s Habitat for Humanity organization, is expected to be named to the title of Deputy Mayor.

Deputy Mayor has never been utilized as a formal title in Fresno’s City Hall and it is unclear the portfolio Grundy would handle or his job responsibilities.

Chris Montelongo, a community revitalization specialist with the city, is expected to serve as Deputy Chief of Staff.

Multiple sources told The Sun on Thursday that Sontaya Rose, a reporter for ABC30, will take a position handling communications.

Despite the veteran presence in a few places, Fresno City Council members have privately expressed reservations about the lack of experience in the Mayor’s office, sources close to the Council told The Sun.

Intense competition to be the Chief

Monday, Fresno Police Chief Andy Hall revealed that there are two candidates remaining to replace him when he retires next year.

Whether Salazar or Balderrama gets the job, Hall is willing to stay on as long as needed to help the transition be smooth.

“I committed to the mayor that I would stay as long as needed to transition the new chief,” said Hall at a press conference Monday. “I’ve been working with all of my deputy chiefs very closely since day one when I became the chief to get them prepared to take over this organization, and I believe they’re well on their way.

“However, if we bring in a new chief from outside, we do have to teach that chief a new language. They have to meet all the community members, and it’s going to require significant more input from me to get that chief prepared – and I’m ready and willing to stay as long as that takes.”

Fresno Mayor Lee Brand, city manager Wilma Quan and Mayor-elect Jerry Dyer will make the final decision between the two candidates, although the timeline for a pick has not been publicly revealed.

Alex Tavlian and Daniel Gligich contributed to this report.