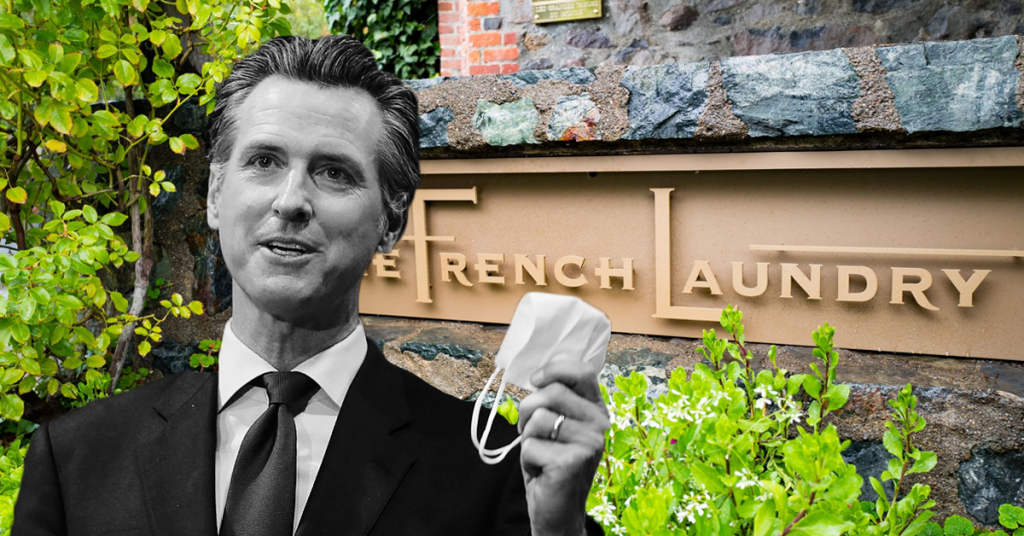 Ladies and gentlemen, it’s time to give thanks.

After more than six months, our local and state leaders are finally starting to act like the rest of us.

Few Californians get to dine at the posh Napa eatery, The French Laundry, for a $325-per-person birthday dinner celebrating a registered lobbyist and long-time personal acolyte.

And fewer Californians are able to send their children back to private school for daily in-person instruction.

In the process, Newsom has had the gall to attempt to regulate holiday gatherings by number of households while doing the exact opposite in the Michelin three-star dining hall.

And while the Governor relishes opportunities to lampoon Washington politicians as “invertebrates,” there are few things more spineless than a non-apology about failing to “model behavior.”

By no means did Newsom sign up to be a crisis, or war-time, Governor. And by even fewer standards has he lived up to the challenge.

After scaring Californians into quarantine, our patience for him to serve with consistency has grown shorter.

Then again, what can one expect from an executive whose rhetorical redundancy has crafted a new language – “Newsomese.”

But the coronavirus consistency deficit is not restricted to Newsom alone.

Fresno County residents have received a cornucopia of coronavirus gaffes in the past week.

It all began when the County of Fresno issued a cryptic announcement that a County Supervisor had tested positive for coronavirus.

In ordinary times, the medical condition of a local elected official is limited to the confines of HIPAA and other medical privacy laws.

Even in the midst of a global pandemic, I believed that editorial judgment should respect that privacy.

Of course, we eventually found out who it was – not by process of elimination or turning the screws to sources – but via Zoom-driven pronouncement.

And so began a bizarre sprint of McCarthyite-style media coverage the likes of which I have seldom seen at the local level.

Reporters, bowing to a (truthful) rumor mill that Brandau attended an election night watch party, began badgering Fresno County Public Health Department principal analyst Sevag Tateosian with alleged confirmations that he was the host of the party that Brandau attended.

Tateosian, who ran for State Center Community College District Trustee this November, did not host an election night party.

He was mistaken for Serop Torossian, the local government affairs chief for Kaiser Permanente, who did host a party attended by a surprising number of Fresno’s big whigs – including Fresno Mayor Lee Brand and Fresno City Council member Mike Karbassi.

Then, of course, came the news that Fresno Mayor-Elect Jerry Dyer and Granville Homes chief Darius Assemi had tested positive.

Since then, reporters have received day-by-day updates of Dyer’s condition, described as a roller coaster virus unlike anything he has ever experienced.

And while I am grateful all of the affected individuals are on the mend, Fresno’s leaders have, too, fallen prey to coronavirus fatigue like the rest of us.

After months of walking on public health eggshells, they too have stopped practicing what they preach – even if for a few hours on Election Night.

Or, in Newsom-ese they ought to have “modeled their behavior” better.

Meanwhile, those who have maintained a hardline against coronavirus restrictions have created challenges of their own.

“I’m not canceling Thanksgiving and I will be singing and interacting with my family without restriction,” Bredefeld wrote on Facebook. “I will continue attending church and singing there, as well.”

One day prior, Bredefeld cancelled a town hall meeting for his district’s residents “to ensure everyone’s safety.”

This Thanksgiving, more than one kind of helpless turkey has found its way onto the dinner menu for Californians.

Rules aside, let’s give thanks and feast.