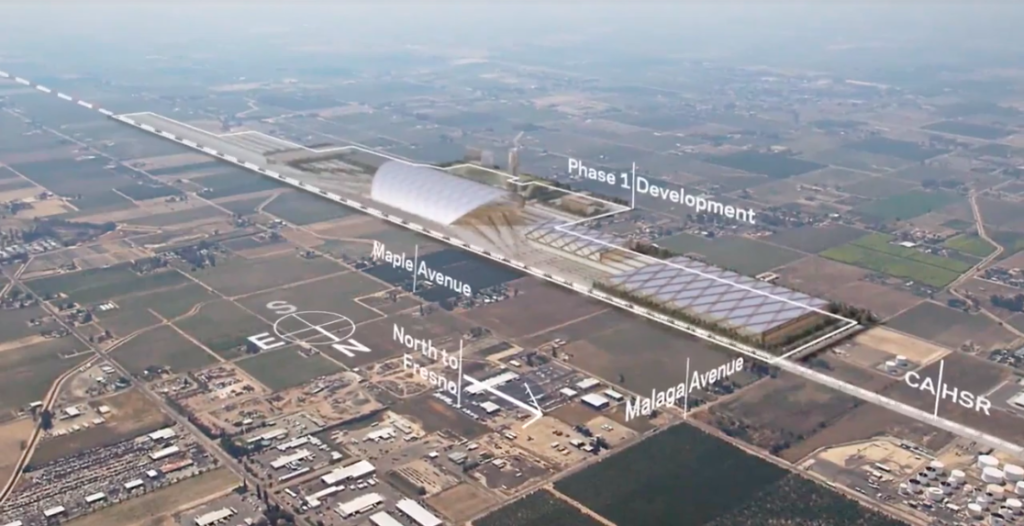 Local taxpayers are starting to get a sense of what it means to unwind the original vision for California’s bullet train.

Most likely the chore will be full of hard decisions.

In particular, I’m talking about High-Speed Rail’s Heavy Maintenance Facility. The City of Fresno very much wants the High-Speed Rail Authority to choose a site south of town for the facility.

However, Gov. Gavin Newsom decided recently that it was too expensive and time-consuming to build the train system from the San Joaquin Valley into Southern California and the Bay Area. Instead, Newsom said, he’ll build a 220-mile-an-hour passenger train system from Merced to Bakersfield. Newsom later backtracked a bit, saying the day (and money) would surely come when the Merced-to-Bakersfield line is connected to state’s big urban centers.

But this strategic retrenchment is coming in 2019. Various government and business leaders in Fresno County for years have been crafting a complex growth strategy based on a bullet train system that is built as originally promised and on something of a timely schedule.

To back up just a bit, the Heavy Maintenance Facility would require a large chunk of property that can be acquired with a minimum of fuss. Several Valley communities seeking the facility, most notably Bakersfield/Kern County, have such a chunk of land identified. Fresno doesn’t. Fresno’s ideal site consists of several parcels with several different owners.

More than three years ago, when Ashley Swearengin, was mayor, Fresno and its local allies began looking at option-to-buy as a solution. Local leaders committed $25 million of Measure C Alternative Transportation Program (ATP) funds to jump-start construction of the Heavy Maintenance Facility should the High-Speed Rail Authority pick Fresno.

Local leaders led by Fresno City Hall agreed to spend up to $250,000 per year for two years to buy options on the privately-owned parcels. The money would come from that $25 million pot of Measure C funds. City Hall and the property owners came to terms on the option contracts.

Thus, the parcels would be easily assembled into one efficient site. If Fresno isn’t picked and the options aren’t exercised, the property owners keep the option money.

Fresno’s mayors and city councils over the years played key roles in approving this strategy.

The second year of options expires on May 2, 2019. The High-Speed Rail Authority remains undecided about the siting of maintenance facilities. It’s unlikely that a train system serving the Merced-to-Bakersfield market needs the same scale of maintenance system as one serving the Southern California-to-Bay Area market.

What are local leaders to do? Continue buying options at $250,000 (or more) per year? Or let the options lapse and hope something good happens anyway?

Infrastructure spending is a controversial policy issue these days. A quarter-of-a-million dollars is real money, especially when it’s spent without apparent effect year after year.

Leonardo’s memo to the Fresno County Transportation Authority was informational only. He writes that the High-Speed Rail Authority intends to submit a status report to the State legislature on May 1 “which will identify the various ancillary facilities necessary to complete and operate the San Joaquin Valley section of (High-Speed Rail), including the (Heavy Maintenance Facility).”

The Rail Authority is keeping the status report’s contents secret until May 1. Fresno still has a chance to land the Heavy Maintenance Facility.

However, Leonardo writes, it should be noted “that a ‘report to the legislature’ may express the intent of the (High-Speed Rail) board, but it may not be binding. The HSR Board must codify the (Heavy Maintenance Facility) decision through Board action.”

That’s not the only time-related challenge facing Fresno.

Leonardo writes: “The right of way purchase contracts require close of escrow by the expiration date of the agreements – May 2, 2019.”

Local officials haven’t even decided to exercise the options, let alone started escrow. It’s my understanding that escrow usually is more than a two-week process.

Leonardo writes: “City staff and consultants are in communication with property owners to determine their willingness to consider no-cost extensions of the purchase contracts. Without further extensions these contracts cannot be used to acquire the (Heavy Maintenance Facility) properties.”

Leonardo writes that, according to the Fresno County Transportation Authority’s lawyer, the option contracts could be used to buy and assemble the parcels for a Maintenance of Way facility rather than the Heavy Maintenance Facility. But in the end, Leonardo writes, the authority for making such a legal opinion rests with the City of Fresno’s City Attorney.

I take this to mean that the Transportation Authority’s legal counsel thinks the option contracts are sufficient authority to assemble the different parcels into one big parcel.

But keep in mind that the $500,000 for the options comes from a pot of $25 million designed to help make a Heavy Maintenance Facility in Fresno a reality. The money is to be an irresistible incentive to the High Speed Rail Authority board.

Leonardo writes that the Fresno County Transportation Authority’s lawyer believes the remaining $24.5 million cannot be used for the Maintenance of Way facility itself.

Leonardo writes that the Fresno County Transportation board, in conjunction with the Fresno Council of Governments board, could amend the expenditure plan. That would make the remaining $24.5 million available for a Maintenance of Way facility.

Leonardo writes: “The Boards are under no obligation to do so and would need to weigh the regional benefits of a (Maintenance of Way facility) compared to the (Heavy Maintenance Facility), and to consider whether or not the region should invest in a lesser facility. In any case, the $24,500,000 of Measure C funding cannot be utilized to exercise the land purchase agreements unless the two Boards approve an Expenditure Plan Amendment. As a result, the land covered by the purchase agreements can only be secured with Measure C ATP funding if the Fresno site is selected for the (Heavy Maintenance Facility).”

In conclusion, Leonardo writes that the Rail Authority wants to “obtain the properties currently under contract regardless of the outcome of the (Heavy Maintenance facility) decision.” As noted by Leonardo earlier in his memo, that would require a number of pieces to fall into place.

“However,” Leonard writes, “funding for purchase of those properties would need to come from (High-Speed Rail) and not Measure C.”

First, Measure C is a countywide transportation tax. Fresno County has lots of infrastructure needs. The governing boards at the Transportation Authority and the Council of Governments have countywide representation. It might be hard for Fresno City Hall to get a broad buy-in for using that $24.5 million for a Maintenance of Way facility.

Second, I wonder what that bullet train depot in Downtown Fresno will look like. I understand the Merced-to-Bakersfield line is to be finished in 2027. We’ll see. But that means the complete bullet train system, should the money be found, is many years away. Would the High-Speed Rail Authority build a Grand Central Station-like depot in Fresno, suspecting it would be too much building for many years to come and thus adding another element for “Train to Nowhere” critics to latch onto? Or is a much smaller depot to be built in the beginning, possibly limiting High-Speed Rail’s power as a transformative force in Downtown’s revitalization?

Third, local community leaders in many sectors see the Heavy Maintenance Facility for a Bay Area to Southern California bullet train system as the key to turning Fresno into the educational and industrial center for cutting edge rail transportation. Many policies at City Hall and the Hall of Records are built on such a vision. No one’s knocking the jobs that a Maintenance of Way facility would provide. But is a Maintenance of Way facility what policy makers had in mind all these years? I don’t think so.

Again – picking up the bullet train pieces won’t be easy for the Valley.