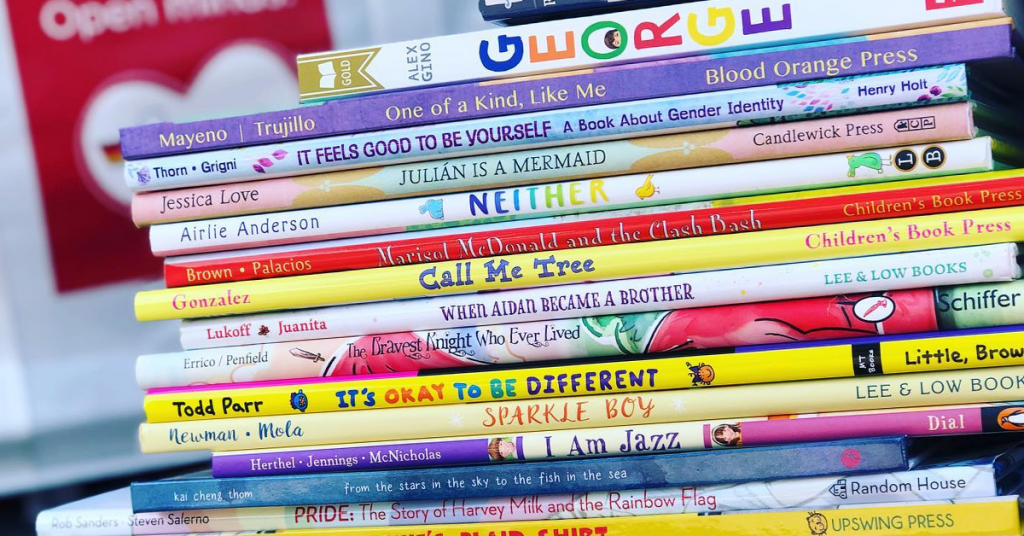 Gender Nation – a nonprofit that provides LGBTQ books to public schools – is donating over 1,000 books across all 65 Fresno Unified elementary schools in the fall.

“Fresno Unified believes that all schools should be safe, supportive and inclusive places where students, families and staff feel accepted, respected and welcome. We are committed to doing the work every day toward this end,” the district said in a statement.

“We are grateful for our partnership with Gender Nation who will help us provide more LGBTQ inclusive books in our libraries in the upcoming school year. We want our students to see themselves reflected and celebrated as valued members of the school community. We also know that diverse representation helps all learners deepen their understanding of others and the world.”

Along with the donation to the local school district, Gender Nation is delivering the books to Los Angeles Unified School District in the fall as well.

Once both deliveries are complete, Gender Nation will have donated LGBTQ-affirming books to around 800 schools since its first donation to Glendale Unified School District in 2018.

Gender Nation co-founder Morgan Walsh told The Sun that the nonprofit contacts schools and offers the books at no cost.

As the nonprofit has grown, some school districts have started to reach out to Gender Nation to inquire about the books.

“Most of the time, at least here in California, a lot of these school districts are looking to have more inclusive libraries, and they are short on donations and resources,” Walsh said. “Our experience so far has been pretty good.”

Walsh said Gender Nation had attempted to get in contact with Fresno Unified administration for years to partner with the state’s fourth-largest school district, but Walsh had trouble getting through.

Eventually, Walsh had a meeting with fellow nonprofit Equality California – which advocates for LGBTQ rights – and asked to be connected to any school districts that would be interested in the books.

Equality California responded saying that Fresno Unified was enthusiastic to partner with Gender Nation. The timing was perfect, Walsh said, as it coincided with the delivery to California’s largest public school district – Los Angeles Unified.

Walsh said Gender Nation’s goal is three-fold – comfort children who might not see themselves or feel supported out in the world, normalizing the experience for children who do not identify as LGBTQ so they will not think differently of those who do identify (in turn minimizing bullying), and deliver these kinds of books to every school across America.

“Having school libraries be safe and inclusive and representative of the communities they serve is really important,” Walsh said. “We all deserve to be able to find ourselves in a book. And of course we’re not going to be there necessarily when the child either finds compassion for a fellow classmate or finds compassion for themselves, but we know that it’s happening. And we all know what it’s like to find ourselves in a book, so we want to make sure that this is available to every child.”

“That’s a crazy statistic,” Walsh said. “That number drops dramatically when they are offered a lifeline or a connection, support of some kind to know that they’re not alone.”

The 16 books being donated are intended for various age groups.

The book And Tango Makes Three, by Justin Richardson and Peter Parnell, is meant for children aged 2-5.

Gender Nation describes the book as “the heartwarming true story of two penguins who create a nontraditional family.”

Neither, by Airlie Anderson, is intended for children aged 4-8.

“In the Land of This and That, there are only two kinds: blue bunnies and yellow birds,” Gender Nation’s description reads. “But one day a funny green egg hatches, and a little creature that’s not quite a bird and not quite a bunny pops out. It’s neither!”

Another book for children aged 4-8 is It Feels Good to be Yourself, by Theresa Thorn.

Walsh said her favorite book of the set is Pride: The Story of Harvey Milk and the Rainbow Flag, by Rob Sanders, which tells the story of social activist Harvey Milk and designer Gilbert Baker and the beginning of the Pride Flag in 1978. The book is intended for children aged 5-8.

“I just think it’s so important that we offer the opportunity for kids to learn about these civil rights leaders in our history, and Harvey Milk was certainly one of them,” Walsh said.

With the LGBTQ-affirming books set to enter Fresno Unified, Walsh had a message for parents who are opposed: “We’re not an organization that informs curriculum. We’re not coming to the schools to adjust what’s being taught to children. These books are simply representing existing populations of students and are there to be organically found.”

Walsh added, “These books aren’t going to change the heart and mind of a child. They’re just going to be a mirror or a window – either reflect back to them who they are or give them a view of what someone else is going through.”

Here’s a look at the other 12 books that are included in the 16-book set that each FUSD elementary school will receive in the fall:

By Stacy B. Davids

“Annie loves her plaid shirt and wears it everywhere. But one day her mom tells Annie that she must wear a dress to her uncle’s wedding. Annie protests, but her mom insists and buys her a fancy new dress anyway. Annie is miserable. She feels weird in dresses. Why can’t her mom understand? Then Annie has an idea. But will her mom agree?”

The Bravest Knight Who Ever Lived

“Knights, dragons, and princesses are the things all good fairy tales are made of, but what happens when the tale has an LGBTQ ending? Follow Cedric on his journey from his days on a humble pumpkin farm to the adventures that lead him to become a full-fledged knight. Once a knight, discover how he uses his cleverness and courage to vanquish a fire-breathing dragon and rescue a beautiful prince and princess.”

“In the magical time between night and day, when both the sun and the moon are in the sky, a child is born in a little blue house on a hill. And Miu Lan is not just any child, but one who can change into any shape they can imagine. The only problem is they can’t decide what to be: A boy or a girl? A bird or a fish? A flower or a shooting star?”

“When people look at Goerge, they think they see a boy. But she knows she’s not a boy. She knows she’s a girl. George thinks she’ll have to keep this a secret forever. When her teacher announces their school play will be Charlotte’s Web, George really wants to play Charlotte – and comes up with a plan so not only can she get the part, but everyone can be who she is, once and for all.”

By Jessica Herthel and Jazz Jennings

“From the time she was two years old, Jazz knew that she had a girl’s brain in a boy’s body. She loved pink and dressing up as a mermaid and didn’t feel like herself in boys’ clothing. This confused her family, until they took her to a doctor who said that Jazz was transgender and that she was born that way.”

It Feels Good to be Yourself

It’s Okay to be Different

“Targeted to young children first beginning to read, this book will inspire kids to celebrate their individuality through acceptance of others and self-confidence – and it’s never too early to develop a healthy self-esteem.”

Julian is a Mermaid

“While riding the subway home from the pool with his abuela one day, Julian notices three women spectacularly dressed up. Their hair billows in brilliant hues, their dresses end in fishtails, and their joy fills the train car. When Julian gets home, daydreaming of the magic he’s seen, all he can think about is dressing up just like the ladies in his own fabulous mermaid costume. But what will Abuela think about how Julian sees himself?”

Marisol McDonald and the Clash Bash

“Marisol is turning eight, and it’s time to plan a birthday party that will be fabulous, marvelous, and divine. At the party store, Marisol can’t decide what kind of party to have. Nothing seems right for soccer, pirate, princess, unicorn-loving Marisol. Finally she comes up with just the right idea, and when her friends arrive for her Clash Bash birthday, a big surprise awaits.”

“Tomorrow is the school parade, and Danny knows exactly what he will be: a princess. Mommy supports him 100%, and they race to the thrift store to find his costume. It’s almost closing time – will Danny find the costume of his dreams in time?”

“Red has a bright red label, but he is, in fact, blue. His teacher tries to help him be red (let’s draw strawberries!) and his mother tries to help him be red by sending him out on a playdate with a yellow classmate (go draw a nice orange!). He just can’t be red, no matter how hard he tries! Finally, a brand-new friend offers a brand-new perspective.”

“Casey loves to play with his blocks, puzzles, and dump truck, but he also loves things that sparkle, shimmer, and glitter. When his older sister, Jessie, shows off her new shimmery skirt, Casey wants to wear a shimmery skirt too. The adults in Casey’s life embrace his interests, but Jessie isn’t so sure. Boys aren’t supposed to wear sparkly, shimmery, glittery things. Then, when older boys at the library tease Casey for wearing ‘girl’ things, Jessie realizes that Casey has the right to be himself and wear whatever he wants.”

When Aidan Became a Brother

“This sweet and groundbreaking #ownvoices picture book celebrates the changes in a transgender boy’s life, from his initial coming-out to becoming a big brother.”