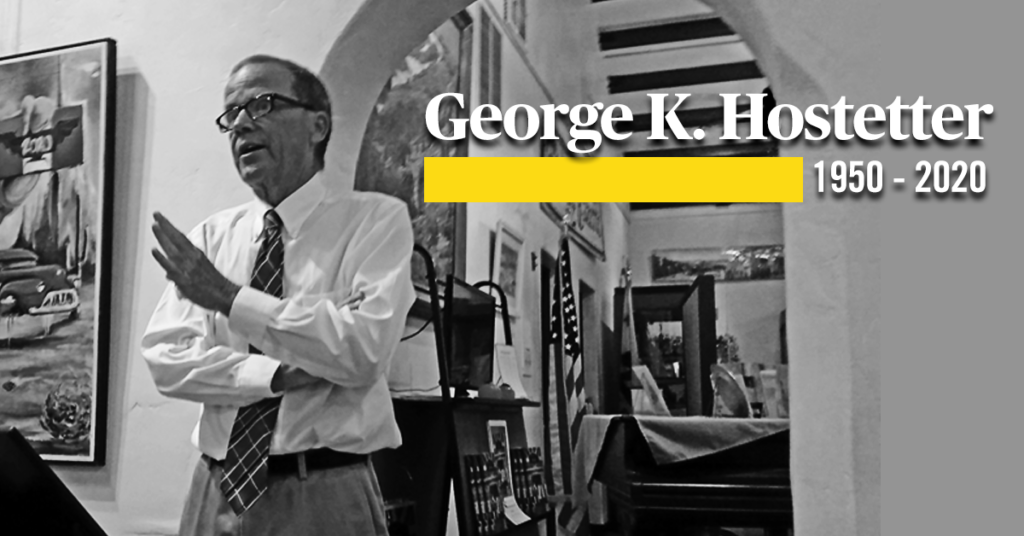 George Kirkham Hostetter, Jr., a career journalist and the modern dean of Fresno’s City Hall press corps at three Fresno publications, passed away from a lengthy battle with prostate cancer on Thursday.

Hostetter, often referred to by family and friends as “Kip,” was the second born son to George Kirkham, Sr. and Melba Josephine Hostetter in 1950 in the Tulare County farming community of Lindsay.

Hostetter graduated from Lindsay High in 1968, served in the United States Army, and briefly attended the University of California, Los Angeles before ultimately graduating from California State University, Fresno.

Hostetter’s career in journalism, he noted, began in 1961 when he occasionally delivered copies of The Fresno Bee as a child in Lindsay.

His written journalism career would begin as a teenaged staffer of The Cardinal, the student newspaper of Lindsay High School.

From 1981 to 1984, Hostetter held the title of sports editor of the Porterville Recorder. He also wrote for The Lindsay Gazette.

In 1984, he moved to join the staff of The Kingsburg Recorder covering a wide variety of beats, but with particular emphasis as the Society Editor, covering weddings and social functions.

He would joke, in a speech to The Lindsay Forum, that after some initial trepidation, he eventually gained the ability to write “a pretty mean wedding story.”

“The hallmark of a Hostetter wedding story was detail,” he would go on to say.

In fact, the hallmark of nearly every category of Hostetter story was detail. His articles would regularly run dozens of column inches before being revised and edited down to fit the constraints of daily or weekly newsprint.

In 1987, he joined the staff of The Fresno Bee where he would stay until retiring in 2015.

Hostetter began on the Bee’s sports desk in 1987.

Hostetter, GVWire editor-in-chief and former Bee colleague Bill McEwen told The Sun, wrote his coverage of Fresno State athletics from the fan’s perspective, but still treated it with the focus and tenacity given to covering elected officials at City Hall.

That didn’t sit too well with then-Fresno State men’s basketball coach Gary Colson, McEwen added, who was unaccustomed to such detailed attention paid to an athletics program.

Hostetter would eventually move to the Bee’s business section. During that period, Hostetter led a special section chronicling the Valley’s economic stagnation in the post-dot-com bubble era entitled “Broke… and Broken.”

Toward the end of the 2000s, he took over as City Hall reporter for The Bee, penning lengthy stories of the City of Fresno’s attempts to stave off municipal bankruptcy following the onset of the Great Recession along with sputtering early efforts to revitalize downtown Fresno.

Ahead of his retirement from the daily paper, Hostetter focused on Fresno’s long-term planning to secure and process much-needed water resources ahead of major environmental limits placed by California’s Sustainable Groundwater Management Act.

Throughout his tenure, Hostetter penned lengthy missives on the ins and outs of municipal government and other pursuits as part of The Bee’s City Beat blog.

One such blog became its own legend: a 105,000-word essay on the 1968 rivalry between the Fresno City College and College of the Sequoia football teams, entitled “Champions and Orphans.”

Owing to difficult financial times at McClatchy, Hostetter was offered a buyout to retire and formally retired on Oct. 22, 2015.

Then-Fresno Mayor Ashley Swearengin and the Fresno City Council declared the day “George Hostetter Day” throughout the City of Fresno.

Four days after retiring from The Fresno Bee, Hostetter joined as a contributor to CVObserver, a digital publication focused on Fresno and Central Valley politics, writing on the goings on of Fresno’s government and civic life – from the Council chambers of City Hall to sparsely attended meetings of the Fresno County Council of Governments.

In true shoe-leather reporting fashion – and just as he had while at The Fresno Bee – Hostetter walked to City Hall from his home near Fig Garden Village to gain a ground-level view of the City of Fresno while penning stories for CVObserver.

In August 2016, Hostetter became the advisor of Fresno State’s student-run newspaper, The Collegian.

Following the acquisition of CVObserver by the Valley Future Foundation, Hostetter continued as a civics contributor to The San Joaquin Valley Sun.

Beyond his journalistic exploits, Hostetter was an avid athlete.

As a youth, he was a regular rugby player. Throughout, he was a strong golfer and nine-ball pool player.

In a statement issued Friday, Fresno Mayor Lee Brand referred to Hostetter’s passing as “a gigantic loss not just to journalism, but to Fresno as well.”

“Not much escaped George’s keen eye in his pursuit of the story, and I always knew that in the end, he would not just get to the bottom of whatever he was investigating, but also get it right,” Brand said.

“George was quirky, be it his never-ending walks around all of Fresno or channeling the famous TV detective Columbo in his questioning.  As the saying goes, ‘they don’t make them like that anymore.’  Reporters are not supposed to be friends with those they cover, but I can honestly say a day won’t go by when I won’t miss George.  I know he is at peace – and almost certainly enjoying a Kit Kat bar.”