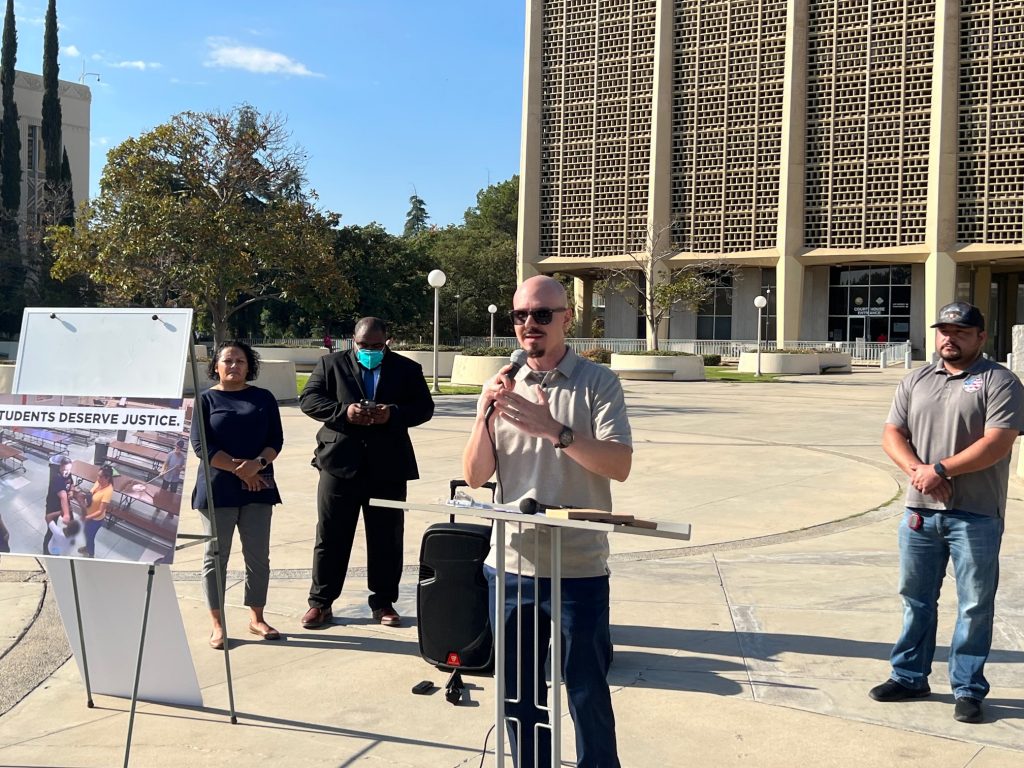 At a press conference outside of the Fresno County Superior Court, the local Democratic Party called on California Attorney General Rob Bonta to launch an investigation into the Fresno County District Attorney’s Office Public Integrity Unit, claiming that Smittcamp has been improperly using her position to target Democrats.

“Since establishing the public integrity unit, Lisa Smittcamp has weaponized the unit to open up bogus investigations in order to put out statements that would have the public believe those being investigated are already presumed guilty before their trial begins,” Hansen-Smith said.

Their call for an investigation comes after Smittcamp’s office charged Fresno City Council President Nelson Esparza, a Democrat, with attempted extortion, stemming from a meeting between himself and former Fresno City Attorney Doug Sloan.

“We encourage every member of the public to file a complaint to the attorney general’s office, no matter what side of the aisle you are on,” Hansen-Smith said.

Part of the press conference centered on embattled Fresno Unified School District Trustee Terry Slatic, who had a physical altercation with students at Bullard High School in 2019.

Hansen-Smith said Smittcamp has failed to charge elected Republicans, such as Slatic, but a reporter from GV Wire informed Hansen-Smith that Slatic is currently not registered as a Republican.

Along with questioning why Smittcamp did not bring charges against Slatic, Savory went on offense against two Republican politicians: Fresno County Supervisor Buddy Mendes and Fresno City Councilman Garry Bredefeld.

Savory noted that Smittcamp appeared on a radio advertisement for Buddy Mendes during his reelection campaign earlier this year.

“Buddy Mendes is one of the least intelligent and most arrogant and least empathetic assholes that has ever been elected to public office. And, oh yeah, she’s also feeding stories behind the scenes to Garry Bredefeld, who can only be bested by Buddy Mendes,” Savory said.

“These two guys are the most partisan, biggest jerks who get the most amount of money from industry leaders in this area, namely her family – the Smittcamps. So we should tie all this together. It’s clear that we would want somebody in that type of an authority figure to be nonpartisan, and she’s been extremely partisan for the past several years.”

The press conference even held a bit of a spat between the media.

Flanking the podium for the speakers were two pictures, one of which was a screenshot of a video of former Wolters Elementary School Principal Brian Vollhardt physically assaulting a student.

The reporter from GV Wire asked the speakers several times what the picture had to do with their claims regarding Smittcamp’s alleged targeting of Democrats.

The speakers did not tie the picture to the claims, instead saying that all instances such as this one should be investigated.

After another question from GV Wire asking for the relevance to this picture to their claims regarding Smittcamp, a McClatchy reporter interjected that the question was already answered.

A jury found Arambula not guilty of child cruelty in 2019 after being accused of hitting his then seven-year-old daughter in the face and leaving her with a bruise.

Wednesday afternoon, the Fresno County District Attorney’s Office released a statement regarding its public integrity unit, saying that the unit’s mission is to investigate and prosecute cases involving public officials or employees who commit crimes relating to their official duties.

The public integrity unity initiates investigations based on submissions from the website.

“It is important to note that these submission are confidential, and the public integrity unit does not routinely publicize when and whether investigations are opened or closed. However, and unfortunately, the Fresno County District Attorney’s Office has noticed an increase in the use of our public integrity unit complaint process by members of our community, of all political stripes, to advance their own personal objectives or to attack perceived opponents,” the statement reads.

“Despite this reality, we are confident that the public integrity unit operates independent of partisan politics, and its filing decisions are based solely on the facts of the case, the applicable law, and our ability to prove the case beyond a reasonable doubt. Furthermore, we welcome any investigation into the practices of our public integrity unit.”