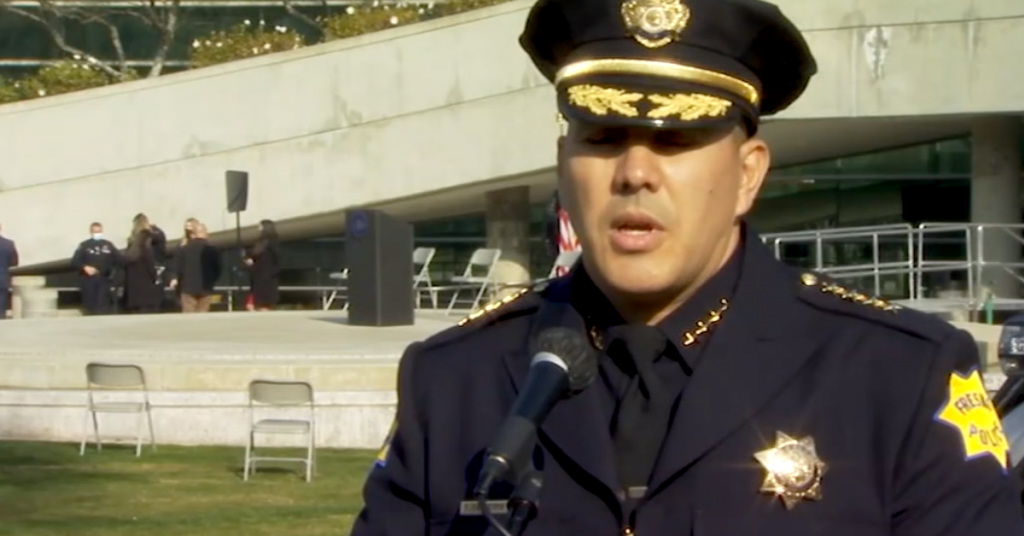 New Fresno Police Chief Paco Balderrama was sworn-in Monday morning in a ceremony outside City Hall, about a month after the city announced his hiring after a lengthy search.

Former Mayor Lee Brand oversaw the search and put his faith in Balderrama, who joins the department after 20 years with the Oklahoma City Police Department, including the last two as the deputy chief.

“There’s no doubt in my mind he has the skill set, the experience and the attitude to lead this city’s police force,” Brand said.

Balderrama replaces the outgoing Andy Hall, who is retiring after serving the Fresno Police Department for 42 years.

“People ask me what advice I would give to the new chief, and it’s always the same: Always do the right thing, follow your heart even when no one’s watching,” Hall said.

Though Balderrama was Brand’s pick – one of his final actions as mayor – the selection came with the heavy backing of newly-minted Mayor (and former police chief) Jerry Dyer.

Dyer spent 18 years as Fresno’s top cop before retiring to run for mayor, and he promised that he won’t get in Balderrama’s way as the new chief takes the reins of the department.

Balderrama takes over a department that faces many challenges, including a surge of violent crime, the state’s decision to enact zero-dollar bail during the COVID-19 pandemic – which put thousands of inmates back on the streets – as well as the 73 recommendations from the Commission on Police Reform which was formed following the death of George Floyd in Minneapolis.

Amid the coronavirus, Fresno entered into a collision course with violent crime.

On Dec. 28, the police department reported that there were 724 shootings on the year, an increase of 96 percent from 2019. There were also 74 homicides, compared to 45 the year before.

Initially, Balderrama said he had a 30-60-90 day plan to ease into the job as he meets the community. That is no longer a viable option with the wave of violent crime.

“That’s kind of out the window right now because there’s a lot of issues that need to be addressed immediately, and violent crime is Number 1,” Balderrama said. “I actually have a meeting first thing tomorrow morning and tomorrow afternoon. I’ve already been on some conference calls with our federal partners to talk about some strategies, some long-term strategies, so we can get a handle on this. Lots of challenges ahead of me, but I think I have the staff and the partnerships to make a difference.”

Balderrama said his top two priorities as the police chief are community safety and community trust. Curbing violent crime will go a long way toward achieving his top goals.

“We would rather be proactive than reactive,” Balderrama said. “If we were responding to a call after somebody’s already been hurt, shot and killed, then that’s not good enough. We want to gather the information needed so we can respond, and we can be more proactive. That’s high on my priority list to talk about how we can do that.

“But this is something that many other large cities across the country are experiencing, and it’s a combination of reasons why this is happening – COVID happens to be one of them, also zero [dollar] bail contributes to that. If we’re putting the most violent offenders behind bars and they’re getting out within hours, that’s an issue… To the residents of Fresno, I can say that things are going to change. We’re going to work very hard to make this city a safer place.”