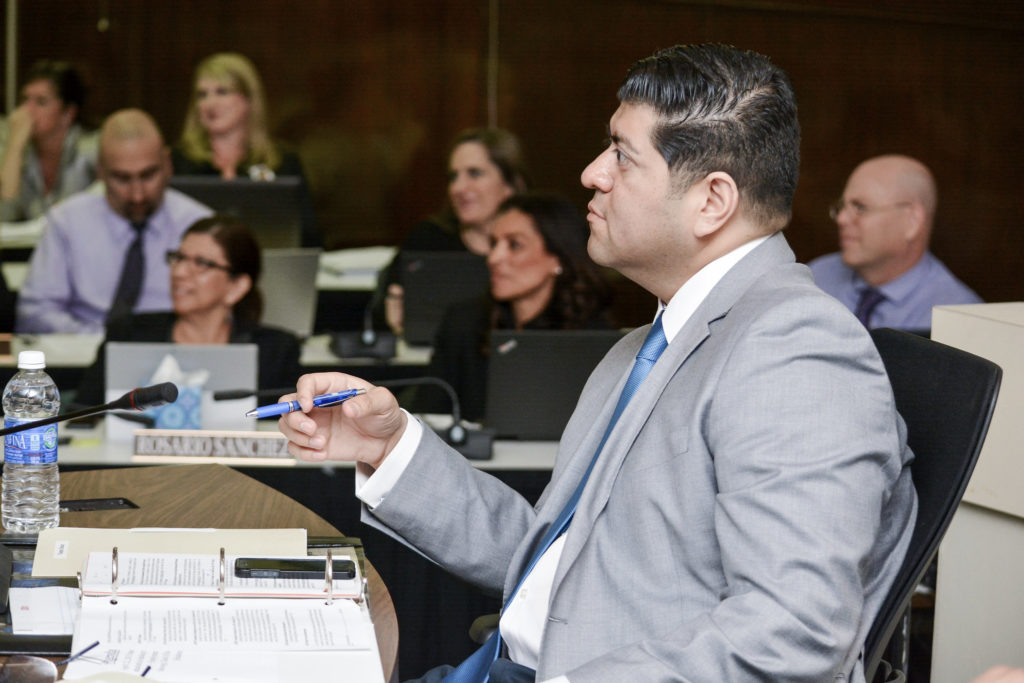 The territorial imperative figures to be front and center at Thursday’s Fresno City Council meeting.

The battle between the council and the Brand Administration involves control of certain office spaces on City Hall’s second floor. The fate of a small number of parking spaces in City Hall’s south parking lot is thrown into the mix for good measure.

On the surface, it all sounds like a tempest in a teapot. But the issue might be another sign of the growing rift between a Council majority and Mayor Lee Brand.

The item in question is a resolution on Thursday’s agenda from Council Member Luis Chavez that calls for Room 2085 to be the exclusive domain of the Council.

Chavez’s two-page resolution begins with a review of who calls the shots when it comes to assigning offices at City Hall.

The City Manager, the resolution states, “subject to official City policy, has authority and may designate use of facilities owned or leased by the City, including all of the first, third, and fourth floors of City Hall, the second floor excepting space allocated to the City Council, City Clerk, and City Attorney….”

The exception on the second floor makes sense. The City Charter gives the power to hire/fire the City Attorney and the City Clerk to the Council. Individual council members, obviously, are in charge of their respective staffs. The Council needs Council-controlled space to fulfill these duties.

The resolution also says the Council “desires to clarify the areas in City facilities available for Council, City Clerk, and City Attorney use, the balance of which is typically available for use by the Administration and other City departments….”

I find interesting Chavez’s use of the word “clarify.” In this context, I take that word to mean “determine.”

2.) The Administration won’t reallocate current office spaces and parking spaces used by the Council, the City Attorney’s Office and the City Clerk’s Office without Council approval.

4.) The budgets for the Council, the City Attorney’s Office and the City Clerk’s office won’t have to help foot the bill for office space not subject to their exclusive use.

Chavez’s resolution is on the consent calendar. I’m guessing a council member will pull it for a full scale debate.

My thinking, based on a bit of research provided to me on background, is that the Brand Administration is firmly opposed to the resolution.

I called the Administration for comment, but got no response.

It’s not that the Mayor and City Manager Wilma Quan oppose providing more second-floor space for the council. I suspect Brand and Quan would be happy to find more space elsewhere on the second floor, perhaps near the office of Administrative Hearing Officer Michael Flores.

Brand and Quan, I’m guessing, are strongly opposed to the council encroaching on what they view as the sovereign territory of the Executive Branch. I remember at least a portion of the area of Room 2085 as being the office of Assistant City Manager Bruce Rudd back in the day. That’s how close the space sought by the Chavez Resolution is to Quan’s domain.

And I wouldn’t be surprised if the Chavez Resolution, should it come to a vote, passes on a 4-2 vote. Voting yes might be Chavez and Council Members Esmeralda Soria, Miguel Arias and Nelson Esparza. Voting no might be Council President Paul Caprioglio and Council Member Garry Bredefeld. The District 2 seat has been vacant since Steve Brandau resigned to take a seat on the Fresno County Board of Supervisors.

Chavez’s resolution is subject to a mayoral veto. Brand in his nearly 28 months as mayor has yet to veto a council action. The Chavez resolution could be Brand’s first. Even though there are only six council members, it would still take five votes to override a veto.

Alliances are always realigning themselves in American democracy. Fresno City Hall is no different.

But it sure seems like Fresnans are witnessing the division of their City Hall into two powerful alliances. One is composed of Chavez, Arias, Soria and Esparza. The other is composed of Caprioglio, Bredefeld and Brand.

Each alliance has all sorts of allies behind the scenes.

I’m guessing the end game for each alliance isn’t who gets a second-floor cubby hole with a decent view of Tulare Street.

The prize is winning the 2020 mayoral race.