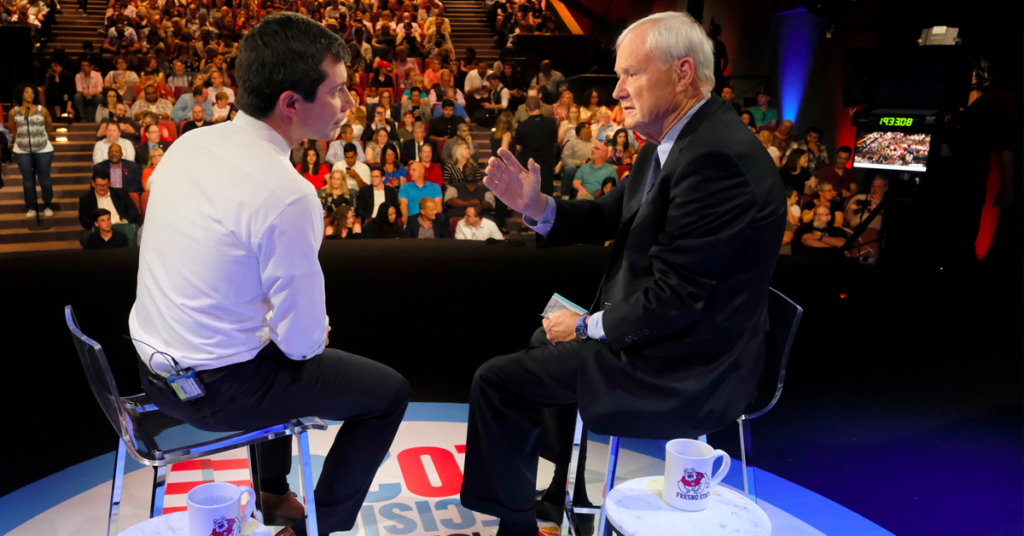 In front of a raucous crowd in Fresno State’s Woods Theatre, South Bend, Ind. Mayor Pete Buttigieg looked into the cameras for an audience on MSNBC’s “Hardball” and made clear one thing.

Buttigieg, who made a full-day swing through Fresno ahead of the televised town hall, held a meet-and-greet at Tuolumne Hall in downtown Fresno on Monday morning.

“Hardball” host Chris Matthews kicked off the forum with questions around gun control, in light of last week’s mass shooting in Virginia Beach.

“If there are trade deals that are not benefiting us enough, I get the idea of adjusting them to make sure that it’s fair trade,” Buttigieg said.  “But that’s not what we’re seeing right now.”

The conversation eventually turned to impeachment, with a local man asking whether Nancy Pelosi’s slow approach to impeachment really was panning out.

“First of all, I believe that the president deserves to be impeached,” Buttigieg started. “I would also say, even though I have revealed myself to be ambitious, in that I am a young man running for president, that I also would think twice before offering strategic advice to Nancy Pelosi.”

While Fresno, and the San Joaquin Valley at-large, has often been relied upon by visiting pols for its diverse and heavily Hispanic population, Buttigieg drew a heavily white audience to Fresno State.

Late in the show, Matthews probed Buttigieg about his failure to gain traction with the African American community, a regular critique of Bernie Sanders in 2016.

“If you are neither already famous with a long track record in national politics nor yourself from a community of color then of course it’s going to take longer for people to come to know and trust you,” Buttigieg answered.

In a question relating to slavery reparations, Buttigieg delivered a slight, albeit cushioned dig at Fresno and its alleged policy of redlining neighborhoods.

“I’m not just talking about far-off historic wrongs, I’m talking about the fact that some of our segregated neighborhoods — and of course here in Fresno, there is an egregious pattern of segregation, but it’s true in my hometown, too,” Buttigieg said. “That’s not a knock on Fresno.”

During the town hall, Buttigieg was also confronted with his own past in an unusual fashion. It turns out the Mayor had his own “Hardball” moment 16 years prior during another Presidential town hall at his alma mater, Harvard.

In 2003, Buttigieg asked then-presidnetial contender Rep. Dick Gephardt (D-Mo.) why he wouldn’t participate in a “Rock the Vote” event to court young voters in the 2004 primaries. Matthews played the clip for the audience to see an even more baby-faced Buttigieg, now 37, aggressively probe the then-House Minority Leader.

In the 2003 town hall, Gephardt cited a scheduling conflict with an event in Iowa. Buttigieg remarked that he’s gotten his own comeuppance with scheduling requests.

Then Gephardt appeared via remote feed from Santa Rosa, Calif. to address Buttigieg in the middle of his own town hall.

Ultimately, Gephardt would remark that Buttigieg was “doing great” thus far through the primary season.