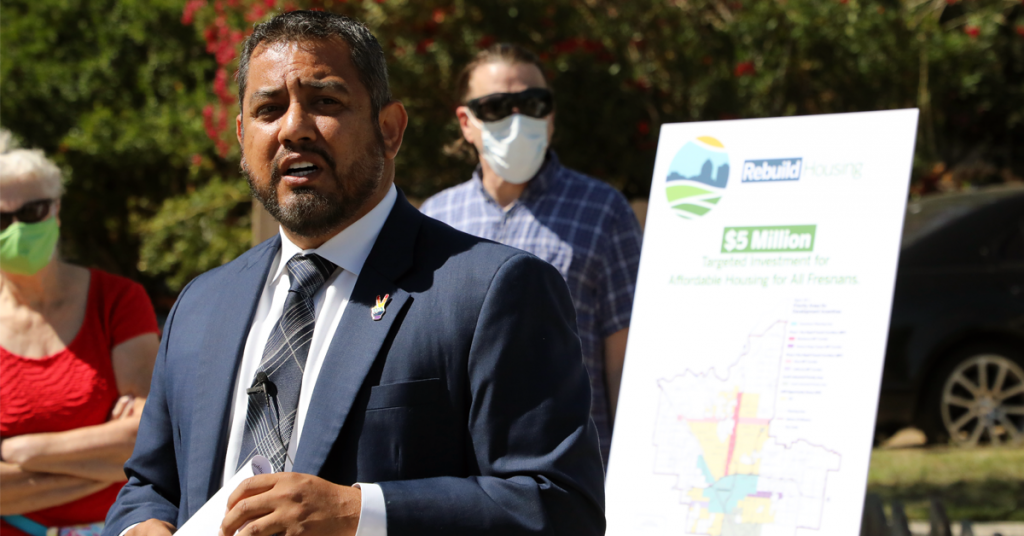 Highlighting recent news that Fresno eclipsed $100 million in sales tax revenue for the first time in its history, Fresno City Council member Miguel Arias doubled down on a proposal to reinvest growing funds into the city’s ailing – or often absent – infrastructure.

Standing on a street corner in a south Tower District neighborhood, Arias pointed to a patchwork of sporadically-poured asphalt as evidence of a need to shift the city’s priorities to align with the mantra, pitched by himself and colleagues, to “Rebuild Fresno.”

“We approved funds to repave all of these streets,” Arias said pointing to a narrow strip of Dudley Avenue that was freshly repaved, then moving toward the cracked Wilson Ave. “But the City said it would only be able to repave the small streets, not these bigger ones.”

Cracks in the sidewalks in these neighborhoods, Arias noted, often are so gaping that grass and weed are able to grow through them, prompting neighbors to clear the roads with weedwackers.

With Fresno lawmakers set to begin hashing out more than $1 billion in expenditures for the next fiscal year, Arias said it was his priority to get a holistic road repair and sidewalk proposal approved.

He pointed to a blown-up copy of a 1912 edition of The Fresno Republican featuring an advertisement for homes in the neighborhood that includes a list of amenities, including “Cement Curbs and Sidewalks.”

The poster sat alongside a stretch of Dudley Ave. with no curb or sidewalk.

The plan, as proposed by the three lawmakers, hones in on four priorities: neighborhood revitalization, affordable housing, road improvements, and public safety.

A push on housing development

Arias also unveiled a proposal to spend $5 million to incentivize housing development in Fresno’s in-fill, with much of it located in the city’s central corridors.

The proposal seeks to provide economic incentives to developers to build in the city’s urban core along with waiving developer impact fees for urban-centric housing projects smaller than 5 acres.

It also includes a partial reimbursement program for so-called “off-site improvements,” such as the installation or improvement of curbs, gutters, and gutters.