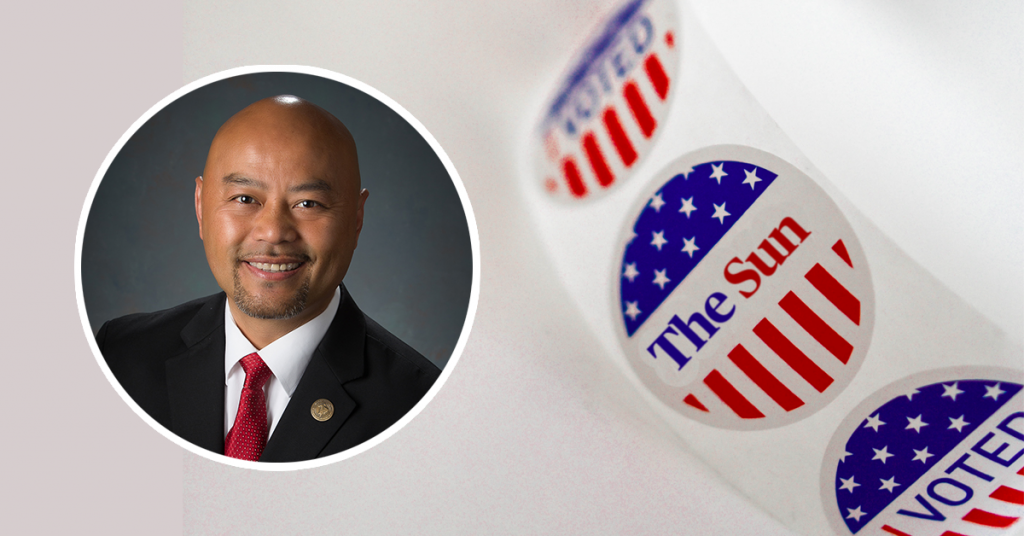 The Clovis City Council election is scheduled for March 2, with current councilmembers Lynne Ashbeck and Vong Mouanoutoua up for reelection. Three challengers – Diane Pearce, Herman Nagra and Noha Elbaz – are also vying for the seats.

The top two vote getters out of the five will be elected to the Clovis City Council. The Sun’s Daniel Gligich talked with Vong Mouanoutoua to discuss the race.

Daniel Gligich: Why are you running for Clovis City Council?

Vong Mouanoutoua: Clovis is a great city, and being able to serve – there’s so much to learn with regards to good governance, and there’s still ways we can improve but at the same time ways we can maintain what we have. I want to be able to further that.

DG: What is your background and what professional experience would you bring to the council?

VM: I have a degree in law. I’ve worked in the courts. I’ve worked in a private law firm. I started managing and overseeing a lot of programs for a nonprofit, Reading and Beyond. I started teaching at Fresno State – since 2010 – teaching in the linguistics department. And I moved over to Fresno EOC (Economic Opportunities Commission), worked in human resources and then ran the energy department, wrote grants, oversaw staff, and oversaw a grant of over $30 million. I’ve sat on many boards and commissions, was on the planning commission for over 10 years, been on the board of the hospital. Right now I’m on the health equity advisory board, I’m on the selective service board, and on the board of trustees for San Joaquin College of Law. I still teach at Fresno State, and I also am a director at Community Medical Centers.

DG: Name your three biggest accomplishments that you’ve won during your most recent term on the City Council.

VM: I really am proud of us opening the medical school, California Health Sciences University. It had its first class of 75 students, which next year I think it will go up to about 100, and it will get to about 145 in year 3 or year 4, adding each year. So we have the medical school here in town. Also with the expansion of Clovis Community Hospital. That’s also something we’re proud of. And we finished the parks plan, and parks and trails, and making that such an amenity in which everybody can use within the city of Clovis – even those outside come and use it – maintaining those and putting those in place and keeping them clean and keeping them very accessible.

DG: In your view, what are the top issues that the Clovis City Council must address in the upcoming years?

VM: The top is always, how do we continue to maintain being the safest city in the Valley? Because I’m a firm believer that safety is sort of the lifeblood of a thriving and/or desirable community. Because without safety, businesses don’t want to come in. Without safety you don’t go and walk the trails or go to the parks. You’re afraid to go to certain schools. Businesses don’t come in, also you don’t go to certain businesses because of it not being safe. So how do we maintain that? I think that’s critical moving forward, especially as we continue to grow. Another issue that we will face is mandates from the state, especially with housing, and regional housing needs allocations. Because the state mandates jurisdictions to account for and potentially – we can’t build, but be responsible for the allocation of housing units. And this next cycle is going to be huge, where it may triple or quadruple what the last round was, because of the housing needs in the community. So how do we plan for that? How do we get ahead? How do we plan for all types of housing? We need to plan, and I’ve always believed that if you plan 50 years ahead you are hopefully doing well. Those are what I feel are big within the city moving forward.

DG: The City of Clovis is in the midst of growth, with additional housing units being constructed in the northwest and eastern edges of its city limits. Do you support continuing low barriers to construct affordable, market-rate housing for the Valley’s workforce?

VM: The thing about development and housing is we don’t have much say in them. The city does not. So developers develop the city. It has to be something in which developers come in, because there is no money from the state. There used to be redevelopment agencies, which actually there were funds to assist in redeveloping and/or building affordable housing. But the way it’s going now there are policies and rules passed from the state but with no funding, requiring certain allocation of different types of housing, but no assistance. And so without any assistance it is difficult for the city to build anything. Our policies are one in which, if you ask any builder, are probably the best to work with if you compare us to any other city our size or bigger, even in the Valley. I will stand behind our customer services, our permitting process. And with regards to how housing is developed, it’s based upon a general plan. So some may say, ‘Why are you building so much?’ Or, ‘Why aren’t you building enough?’ So if the plan that is approved by the citizens and in the council and then up to the state, we’re just fulfilling the plan. So it’s nothing that is out of the blue. We’re not making any special exceptions to any rule. We’re following exactly what we planned out.

DG: Additionally, would you support the City of Clovis seeking annexation of some or all of the Southeast Growth Area (SEGA) or other unincorporated areas in eastern Fresno County to support additional market-rate workforce housing?

VM: I’m a firm believer that in order to meet the needs, you need to plan. And in order to plan well, you do need additional lands annexed into the city so that way you can actually plan for it. Because if you don’t, then you have to work with what you have, and it may not be satisfactory to the citizens who currently live here already. So, in other words, do you want a five-story building next to you? Because it was never planned to accommodate that number of units, but we have to build it, so we’re going to build it next to you because you’ve got that empty lot which was already zoned for something else. So in order to plan better you need to look at where we can, and those who want to, because coming into the city is something which property owners will have to decide. But when they do then we can kind of go, ‘OK, here’s the new growth area. How do we accommodate what the state is mandating?’ And that’s the best way to do it.

DG: As we enter into our eleventh month since Gov. Gavin Newsom issued his initial shelter-in-place order, Fresno County experienced a significant jump in crime in 2020. What do you believe is the root cause of this increase? And how can Clovis leaders combat it from spreading into the city?

VM: I don’t study enough, so I don’t know, but I do believe that the laws and what has been passed by the state has amounted to many more criminals being out on the streets. So when the laws are relaxed and the consequences are relaxed, then people tend to break the law more. So that can be it. The other is the pandemic may have caused some as well, because people have just been frustrated, whether it’s because of mental health. We’ve seen increases in child abuse cases, domestic violence cases, because life has changed, so those have increased. But for crime to remain lower, the citizens, the leadership, have to expect and want less crime. What do I mean by that? If we expect our citizens to behave better, and we expect our leadership to also behave better, there’s a result. In other words we hold each other to a higher moral ground. We have to do that, and the citizens in Clovis, I believe, want that, expect that of each other and will hold each other accountable, and the police force will work together with our community to uphold that as well. So when there’s an expectation, kind of like at school – if the school expects me to do this well, then I push myself harder to meet that standard. If the school lets me slide at a lower standard, I overall will – in general, I’m not saying everyone – in general people will meet whatever standard that is expected. Clovis is great in that the citizens care so much for the quality and the safety and the type of life they have enjoyed.

DG: Clovis Unified and the City of Clovis regularly work in concert. The school district is still a long way from fully reopening school sites under Gov. Gavin Newsom’s orders. What are your thoughts about returning students to campus and do you believe the City can play a role in assisting an expedited reopening of its K-12 public schools?

VM: Well they have their own jurisdiction, and we respect and we appreciate the partnership that we have with the school district. I think like the school, everyone is having difficulty obtaining a lot of the data surrounding COVID. We all like to operate based on facts. Because the data is not readily available, the data’s also not as thorough as we want it to be, it makes for a much more cautious reopening. So I think that the school has good leadership and very intelligent leadership working on a plan that will meet as much of the needs of the staff and/or parents with families with children within Clovis Unified.

DG: Is there anything else you would like to add or address?