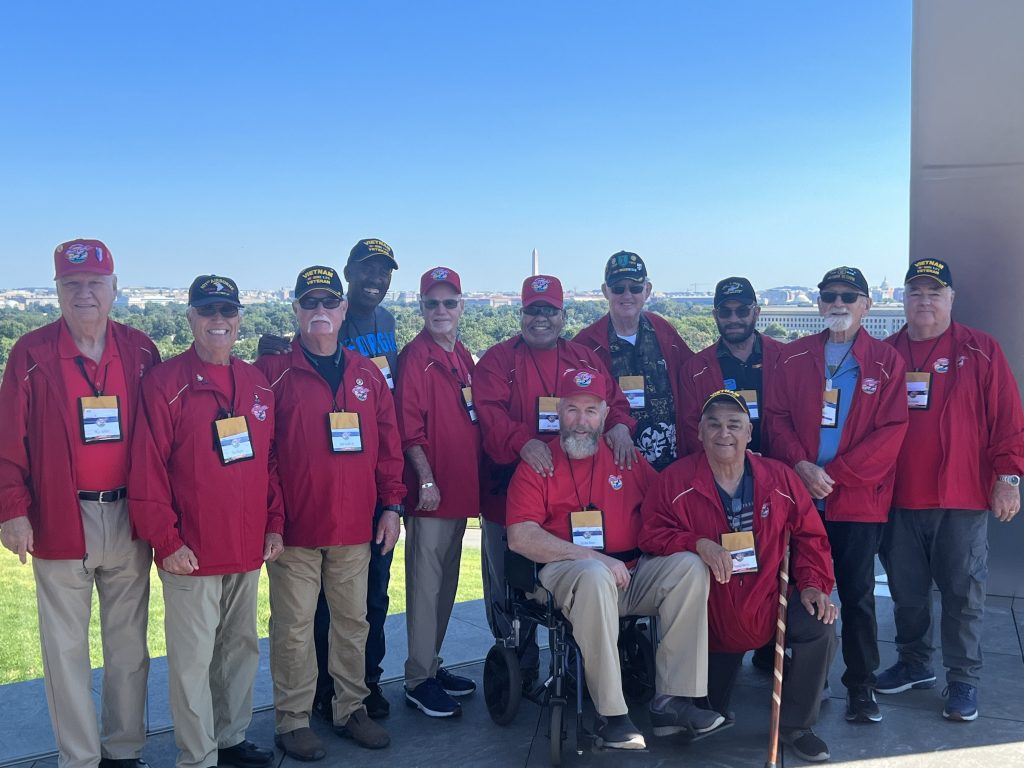 Something was different this time around at the Vietnam War Memorial for Fresno’s Mike Keller.

For the first time in several trips to visit the famed black granite wall that lists the names of the 58,318 Americans who paid the ultimate sacrifice in Vietnam, he did not cry.

It was a profound moment for Keller, 77, who served in the Army from 1966-69 and spent a year fighting in the war.

The difference this time for Keller was made possible by Central Valley Honor Flight and one of its central missions: healing.

The healing process, evident in the 67 veterans who flew on Honor Flight to Washington D.C. to visit their war memorials, was especially prevalent for a group of 12 Vietnam veterans who are part of a PTSD support group at the Fresno VA Vet Center and went on the trip together.

Simply having the group together, who have bonded as brothers in recent years, made all the difference at the solemn Vietnam Memorial.

“There was a group of us that spent some time there,” Keller said. “We didn’t talk a lot, but we knew what each other was thinking.”

Keller said the group formed six years ago after they met while attending PTSD classes together at the Vet Center.

Finding solace in others may seem like an obvious course of action for outsiders looking in. But for veterans, finding the right people to talk to and connect with to deal with their trauma they incurred while serving their country does not come easy.

“You kind of connect in the class, but then you’re all Vietnam veterans and that kind of draws you closer,” Keller said.

“It’s easier to talk to them about issues than somebody that’s never been there or experienced it. We’ve become very close.”

Their stories – both in Vietnam and throughout the rest of their lives – are nothing short of incredible.

Brugetti, 76, was a door gunner on UH-1 helicopters and witnessed other helicopters being shot down on base.

Garcia, 75, had to carry body bags that contained the remains of his fellow soldiers.

Roberts, 77, served in grave registration and had to process fallen soldiers.

Bud Smith, 74, transported fallen soldiers from helicopters to the morgue. Later in life, he became a Madera County Sheriff’s deputy and continues to serve as a bailiff.

Keller was pulled out of battle, and when he got off the plane in Seattle in his fatigues that were soiled with blood from combat, his “welcome home” was getting spit on. He, along with many, is also forced to live with the debilitating effects of Agent Orange, including neuropathy.

Dixon, 70, served as a crew chief, mechanic and door gunner on CH-46 helicopters. He returned home to raise 9 children with his wife Linda and better the lives of 132 children who he fostered.

Every veteran in the group has impactful and amazing stories, some of which have only been able to be revealed by discussing them with each other – people who had to witness and experience the same horrors of war.

The group had been meeting in-person weekly for several years, but the COVID-19 pandemic forced the veterans to shift their meetings to the phone for the last couple of years.

“I’m hoping we can get back to meeting in-person, because there’s things that happen there that are very supportive for us that you don’t always get over the telephone,” Keller said.

This trip for the 12 in the group to go on Honor Flight together has also been in the works for a long time, but the pandemic prevented any flights from happening in 2020 and 2021.

“We insisted on that we’re a group, and we want to go the 12 of us together,” Keller said. “It was important for us. We’re there to support each other. We just wanted to make sure we were together.”

Keller called Honor Flight the “trip of a lifetime” and appreciated the continued bonding that took place over the course of a few days in Washington D.C.

“It’s been very special, very special,” Keller said. “I want to say I enjoyed it. It’s traumatic in a way, but it’s good to be with brothers that have experienced similar situations.”