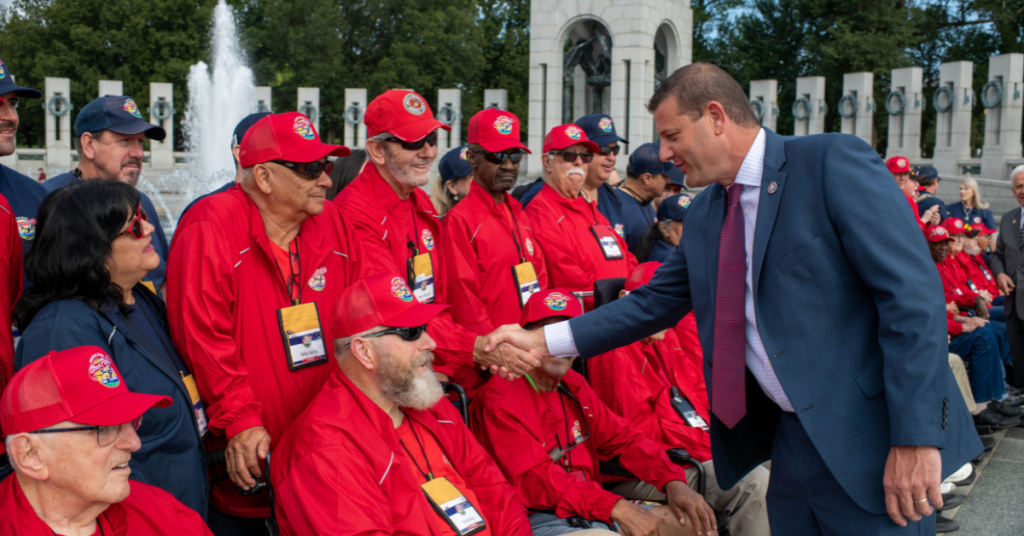 The 22nd Honor Flight from the Valley departed Monday morning from Fresno Yosemite International Airport, taking 67 veterans across the country, with each one accompanied by a guardian.

The veterans are from 20 cities across Fresno County, Madera County, Merced County, Mariposa County, Stanislaus County and Tulare County and range from 67 to 98 years old.

Joe Reyes, 98, is the lone veteran who served in World War II, where he served in the Army as a gunner with the 473rd Anti-Aircraft Artillery Battalion in Europe.

A small number of those on the flight early Monday morning served in the Korean War and post-Korean War era, while the majority of the 22nd Honor Flight fought in Vietnam.

An early morning start on Tuesday began with a tour of the Marine Corps War Memorial in Arlington, Va., which depicts the famous 1945 photograph of six marines raising an American flag on Iwo Jima.

For Dinuba’s Raul Cisneros, 69, the trip to the memorial offered an opportunity for himself to honor his fellow Marines who lost their lives serving their country.

“I have too many brothers that died, and to me they’re my heroes,” Cisneros said. “And I thank God so much that he let me come. It’s an honor to come honor them. I’m blessed. I came back.”

Cisneros served in Vietnam from 1971-73. Initially, though, his path was not set for the Marine Corps.

He was drafted at 18 to the Army, but with two older brothers already in Vietnam warning him to stay out, his sister had a plan to get him into college and avoid the war.

Tragedy struck on the day of his high school graduation, however. Cisneros’s sister was on the way up to the Central Valley from San Diego to celebrate with the family, but she was killed in a car accident.

In the aftermath, with college not an option anymore, Cisneros enlisted in the Marines and went to Vietnam.

Decades later, Cisneros gets to travel to the nation’s capital at no cost to him with his daughter, Kristy, as his guardian.

“I think it gives us a bit of some type of closure,” Kristy said. “We never understood this side of my dad because he keeps it quiet for so long. But being here, we get to acknowledge he wouldn’t be the man he is today if it wasn’t for what he learned in the military. He carried it on.”

Since Cisneros survived the war, he now has 19 grandchildren and seven great-grandchildren.

One of his grandsons, Joseph, has taken after him and joined the Marines.

“He told me, ‘Grandpa, I’m going to follow in your footsteps.’ I go, ‘Mijo, I’m honored, don’t get me wrong, but you’re going to be your own man. You choose what your heart tells you.’ And he joined the Marine Corps,” Cisneros said.

After visiting the Marine Memorial, Honor Flight headed over to the World War II Memorial, where they were joined by two of the Valley’s Congressional Representatives – David Valadao (R–Hanford) and Jim Costa (D–Fresno).

Both Valadao and Costa have been supporters of Honor Flight since it started in the Central Valley in 2013.

“It means a lot because these guys put their lives on the line for us and the nation, and they’re the greatest generation. They were obviously important enough to build this amazing monument,” Valadao said of the World War II Memorial.

“It was an easy decision to come out here and spend some time with them, introduce myself to them and thank them for all their service. I don’t even know how many Honor Flights I’ve been here to greet, but I’ve been to a lot of these and always happy to do it and will continue to do it every chance I get.”

Costa said his drive to support Honor Flight stems from his family, which goes back three generations of members who served in the military.

“Whether they served in World War II, Korea or Vietnam, or the more recent conflicts, these memorials are a tribute to their service to our nation, and the overwhelming support from our Valley makes this happen through private donations.”

Honor Flight continued on to the Smithsonian’s Museum of American History, where they enjoyed lunch paid for by the Congressmen.

Later that afternoon, Honor Flight visited the Navy Memorial, the Korean War memorial and the Vietnam War Memorial, which was an emotional experience for many veterans who searched for the names of those who died in battle around them.

Honor Flight ended the day with a banquet dinner and is gearing up for another busy day Wednesday, which will see a trip to Arlington National Cemetery and the return home to the Central Valley.

The public is encouraged to attend the Welcome Home procession at the Fresno Yosemite International Airport Wednesday at 6 p.m. in order to honor the veterans and give those who were not welcomed home with open arms after their respective wars, such as the Vietnam veterans, a proper celebration and thank you.