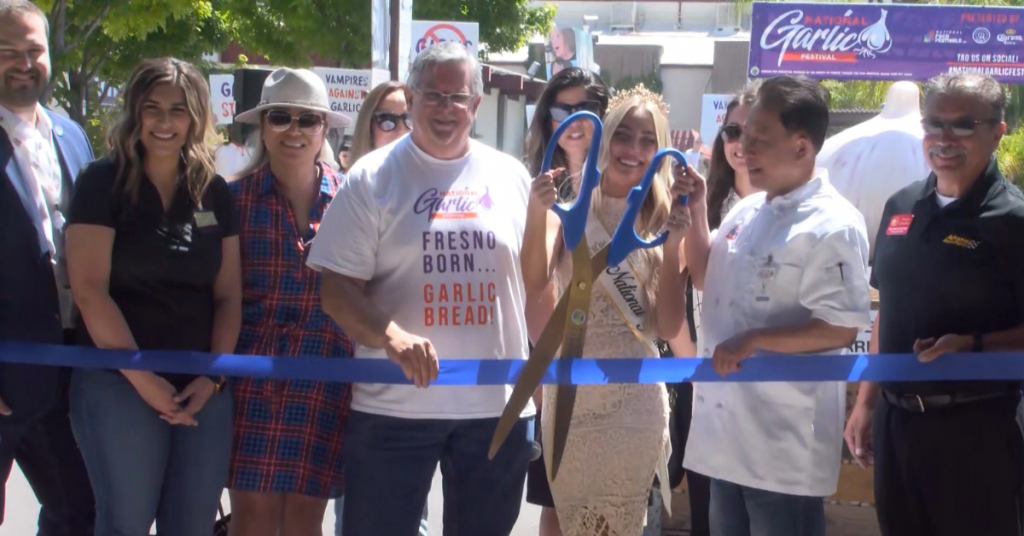 Garlic fries, garlic bread and garlic ice cream made up just some of the sights and smells at the first ever National Garlic Festival over the weekend.

Taking place at the Fresno Fairgrounds, the festival kicked off Friday morning with a long line waiting to enter and pick from over 300 garlic-inspired foods being offered, as well as the various garlic-based products available to purchase.

“This morning at the ribbon cutting it was really amazing to see the number of people out that lined up out front and want to support what we’re doing,” Peter DeYoung, National Garlic Festival co-founder, told The Sun on Friday.

By Friday afternoon the festival was averaging over 1,000 tickets sold per hour, which DeYoung described as “very healthy.”

One of the main attractions for festival goers was the celebrity chef lineup, headlined by famed public television cooking star Martin Yan, whose eponymous show “Yan Can Cook” has been broadcast for 40 years running.

“I’ve known Martin for many years, and this guy, he doesn’t age. He’s a wonderful man. He is super knowledgeable and very excited about what we’re doing here in Fresno,” DeYoung said.

“He’s actually spent quite a bit of time here in Fresno supporting agriculture, and Valley Public Television is a big commitment of his. It was wonderful to invite him and to see him respond the way that he did with such excitement. He’s been having a great time.”

“If there’s anybody to get people excited about what we’re doing and have it come really from a place of sincerity, Martin Yan was a great choice and is really having a blast,” DeYoung said.

Outside of the celebrity cooking demonstrations, one of the other main attractions was the showing of “American Grown: My Job Depends on Ag | Garlic,” produced by Valley Public Television.

“It does just an amazing job at telling the story of the Fresno County garlic industry out of the mouths of the people that are in it and have been in it for a very long time,” DeYoung said. “It offers a very unique perspective and is done in a way that just grabs you.”

Just like the Valley PBS production, DeYoung sees the garlic festival as a whole as another way to put Fresno County on the map nationally.

“It’s all about telling positive stories about Fresno County and the things that we do really well and being comfortable about who we are as a community. We are an agriculture-based economy, and there’s nothing wrong with that. There’s few places on the planet that do what we do and how we do it with the expertise and the perfect soil, and the weather conditions are optimal,” DeYoung said.

“It really is a special place to live, and we should be telling positive stories and not allow the rest of the country and others to focus on the negative things. We allow that to happen, and we’re not going to do that anymore, so this is kind of the start of a new way, I think, of Fresno County being noticed.”

One reason why the garlic festival was even made possible was through a $225,000 allocation in American Rescue Plan Act (ARPA) funds from the Fresno County Board of Supervisors.

That funding specifically contributed to advertising and marketing, which DeYoung credited to the high turnout on Friday.

“Had we not gotten the funds, we would’ve had a good festival, not an outstanding festival. It takes time to build those, so we’re very grateful to the county of Fresno for the forethought to allow us to gain their trust really to do what we do best, and that is to tell stories about local agriculture and regional commodities,” DeYoung said.

“That’s what I’ve been doing professionally for 25 years. We’re very grateful. It’s a good thing to be in the position that we’re in. I don’t look at this year as being a huge money making opportunity. It’s really about establishing ourselves as the national garlic capital of the United States, and we couldn’t have done it without that help.”