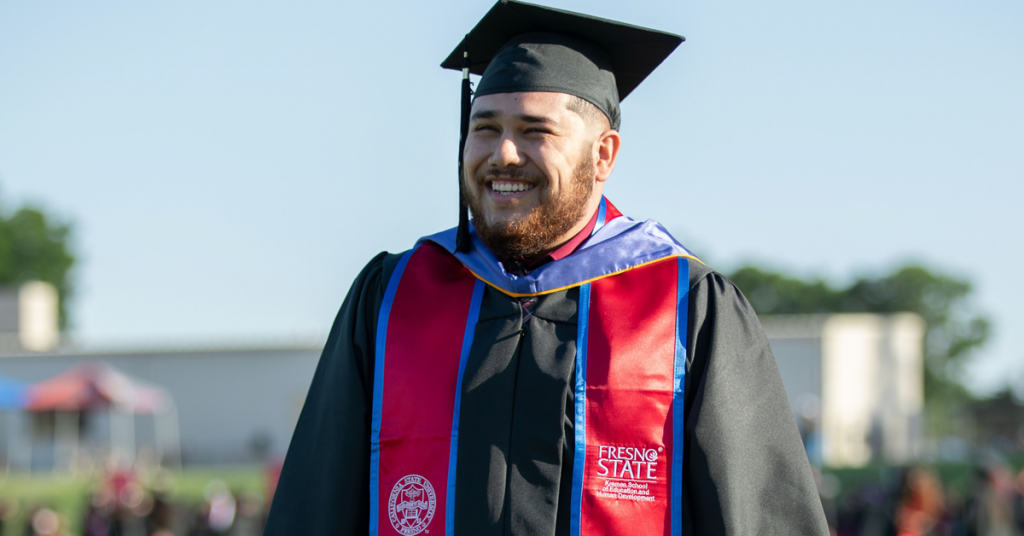 The road to a college degree wasn’t always going to be smooth sailing for Avenal native Arturo Cabrera. In fact, there was a time when he didn’t think college and higher education would be in the cards for himself.

Cabrera, who arrived to the eastern Kings County town from Mexico at the age of seven, is now the proud owner of a Fresno State Master’s degree, thanks to a major boost from the Wonderful Company.

With his degree in-hand, he’s now ready to give back.

Cabrera’s mother has worked as a pistachio and almond packer for Wonderful for about 20 years, ever since his family moved to Avenal from Mexico.

“It was tough at first,” Cabrera said, reflecting about his childhood move. “I remember I didn’t want to eat anything from here. At first I would only eat cereal and milk and things like that, and obviously the language was a big issue as well. At first I would go to ELD (English Language Development) classes and get that extra support. I think it was a little bit easier for me just because I was so small, and I think I caught onto the language a little faster.”

Even though the transition was tough at first, Cabrera is happy that his family found a home in Avenal, which turned out to be a good place to grow up with its small-town roots in agriculture.

“It was nice, just because it felt like a pretty safe place most of my time growing up, but it was tough having to drive 40 to 50 minutes to get groceries or go to the nearest mall, things like that,” Cabrera said. “But overall I think it was nice. I think it was something that I was used to back in Mexico, so it was a nice transition to get there. I felt like if I would’ve moved into a bigger city it would’ve been a bigger shock for me, so I think it was a perfect little city to move to.”

Cabrera received encouragement from his parents while he was growing up to further his education in college, which would serve him in the future.

But Cabrera struggled to envision himself on a college campus.

That all changed during his sophomore year at Avenal High School when he joined Wonderful’s College Prep Program.

The program, provided to children of Wonderful employees, is staffed with specialists who outlined the various college application requirements as well as SAT and ACT test preparation.

By the time his senior year of high school rolled around, he went to the specialists for help with financial aid applications, dorm applications and any general questions he had.

That opened the door for him to attend Fresno State and put him on the path to a bachelor’s degree, with a scholarship from Wonderful’s Education Scholars scholarship program.

The scholarship provided Cabrera with $2,000 each semester toward his tuition and expenses during his undergraduate studies, along with a counselor to guide him.

That support continued as Cabrera jumped into a Master’s program in student affairs and college counseling.

This year, Cabrera was one of 58 Wonderful Education Scholars feted by the company for completing his studies during the academic year. The scholarship funds more than 600 students whose parents are employees of the farming company.

After interning with Wonderful as a graduate student, he was hired on to work as a college success coach and guide students who are in a similar position as he was growing up.

“I’m doing the job that I wanted and dreamed of,” Cabrera said.

He said he has always wanted to work in a field where he can help people. He thought about being a therapist, but that desire switched to becoming a high school counselor once he was a Bulldog.

The internship served as a turning point for Cabrera and helped him realize his dream of serving others.

“My dream was always to give back and to help others,” Cabrera said.

Cabrera is one of the 58 graduates from the the past academic year being celebrated by The Wonderful Company, one of the nation’s largest food producers, for being part of its education program.