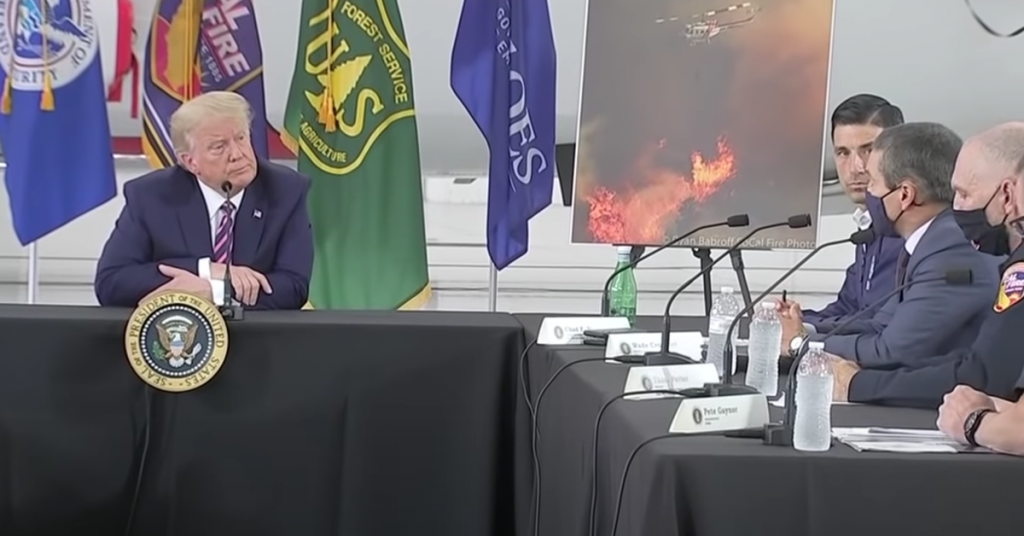 President Donald Trump touched down in Sacramento on Monday for a briefing on the wildfires currently devastating the state of California.

The president blamed the forest fires on poor forest management, leading to a build up in dead trees and leaves.

“When trees fall down, after a short period of time, about 18 months, they become really dry,” Trump told reporters. “They become really like a matchstick. There’s no more water pouring through. They just explode. They can explode. When you have years of leaves, dried leaves on the ground, it just sets it up. It’s really a fuel for a fire. So they have to do something about it.”

In the roundtable meeting with the president and various officials, Newsom acknowledged that poor forest management has been a leading factor with the fires.

“There’s no question when you look past this decade and looking past almost 1,000-plus years, that we have not done justice on our forest management,” Newsom said. “I don’t think anyone disputes that.”

Newsom thanked Trump for his support of a 20-year commitment between the federal government and California to double the state’s vegetation management and forest management.

The governor also said that climate change is another leading cause of the fires.

“We obviously feel very strongly that the hots are getting hotter, the drys are getting drier,” Newsom said. “When we’re having heat domes the likes of which we’ve never seen in our history – the hottest August ever in the history of this state. The ferocity of these fires. The drought, five-plus years, losing 163 million trees to that drought. Something’s happened to the plumbing of the world, and we come from a perspective, humbly, where we submit the science is in and observed evidence is self-evident that climate change is real, and that is exacerbating this.”

California Secretary for Natural Resources Wade Crowfoot also pushed the idea that climate change has contributed to the fires.

“If we ignore that science and sort of put our head in the sand and think it’s all about vegetation management, we’re not going to succeed together protecting Californians,” Crowfoot said.

“It will start getting cooler,” Trump said. “You just watch.”

Mims spoke to Trump about the Creek Fire and said she has made progress with the Federal Emergency Management Agency (FEMA) to have a representative deployed to the incident command post.

Following the roundtable meeting, Trump awarded the Distinguished Flying Cross to seven members of the California National Guard for their efforts helping rescue over 200 people trapped by the Creek Fire at Mammoth Pool.

“Our nation is strong because of remarkable individuals like these service members,” Trump said. “In the midst of the greatest trials and biggest challenges, American prevails because of the brave and selfless patriots.”