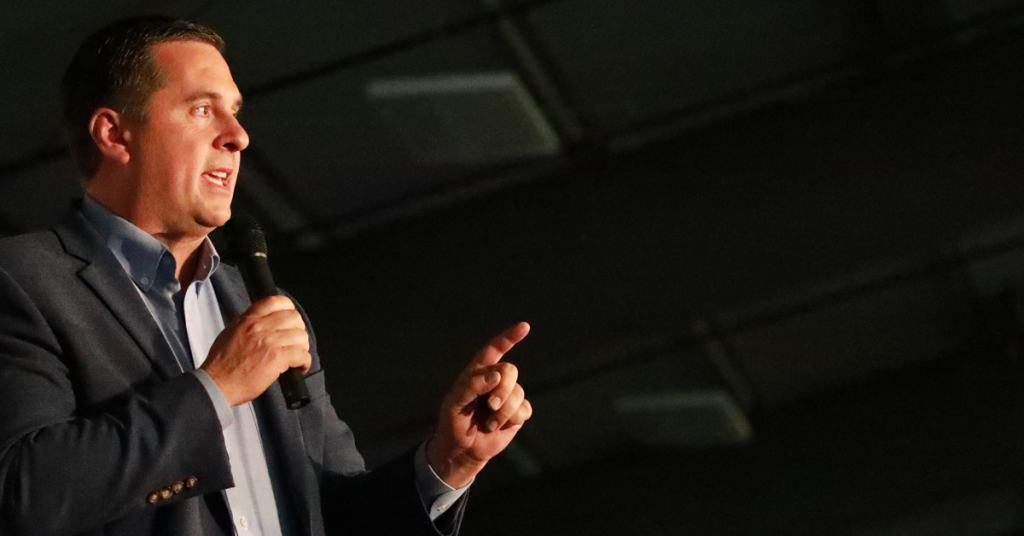 In a state where Flex Alerts are ever-increasingly becoming shorthand for the potential of an energy blackout, lawmakers facing calls to bring California’s energy grid back into normalcy have been short on solutions.

This year, one idea sprung up from what – on the surface – would appear to be an unlikely source: Rep. Devin Nunes (R–Tulare).

But Nunes is no stranger to waging battles on environmental terrain.

Shortly after making his debut on Capitol Hill, Nunes gained recognition for his insights into the positioning of environmental groups and ultimately leading to the response to a decades-long legal and political assault on water flows to the farms and communities of San Joaquin Valley and Southern California from the Sacramento-San Joaquin Delta.

But something new has captured his attention: the Golden State’s energy, or in many cases, lack thereof.

Shortly after Independence Day, the senior California lawmaker rolled out the Clean Energy Protection Act, his latest in a long line of actions aimed at lowering the cost of energy by boosting supply.

It may strike the casual observer as odd to see Nunes, a legislator known nationally for his watchdog role over the U.S. intelligence community and locally for being a zealous warrior seeking to secure water supplies for the fertile San Joaquin Valley, leading a crusade on energy production.

But the push comes amid more than 19 years of work to remove restrictions on America’s energy production by the Tulare dairy farmer-turned-legislator.

Nunes, whose early work on Capitol Hill was shaped by battles with environmental lobbies including the Natural Resources Defense Council, Sierra Club, and Greenpeace over water, saw a corollary in California’s ever-shifting energy position.

The view was coming into focus: dismissing nuclear energy as a central element of clean energy production while simultaneously clamping down on oil, coal, and natural gas production and supplies would drive up the price of energy for ordinary Californians with no guarantee of reliability.

In 2006, Nunes found himself leading the charge for expanded energy options on a House task force dubbed the Energy Rapid Response Team.

The end result for the Tulare Republican was authoring the American-Made Energy Freedom Act.

Four years later, the underlying work would be retooled and developed into a more sweeping document: The Roadmap for America’s Energy Future.

The roadmap incorporated elements from the task force and the 2006 bill – such as opening permitting for oil exploration in the Arctic National Wildlife Reserve and increased tax credits for developing advanced renewable and alternative energy technologies.

In free-market spirit, Nunes also crafted a “renewable energy reverse auction” that created a competitive market for alternative energy producers to vie for Federal assistance on a per-megawatt basis rather than unspecified grant guidelines.

Such assistance from the taxpayer would be granted to the lowest bidders, regardless of alternative technology used.

The auction system served as a competitive alternative to the low-interest Federal loan programs that became riddled with fraud and corruption under the Obama administration led by Fremont-based Solyndra.

11 years after penning the Roadmap, the underlying problems facing California and the nation are very much the same.

National gas prices – but perhaps more acutely in the Golden State – are nearing all-time highs reached during the depths of the Great Recession.

Meanwhile, energy production continues to slide toward underdeveloped green sources incapable of matching the output of their emissions-creating counterparts.

Despite that, production at nuclear facilities – including Diablo Canyon, the target of Nunes’ latest bill – continues to buoy cheap energy for America’s neighborhoods and businesses.

Dating back to his first term in the House, Nunes has made understated, yet critical, energy measures a hallmark of his legislative portfolio.

In 2004, he led the push to extend renewals of hydroelectric power production in Sequoia and Kings County National Parks for Southern California Edison’s Kaweah Project, with a maximum output of 8.85 megawatts of energy production.

Yet, production realities and California’s insatiable demand for energy have prompted new worries about shuttering its largest clean energy source.

Diablo Canyon, operated by Pacific Gas & Electric, was first commissioned in 1985 more than 17 years after construction first commenced on the site on the central coastline of San Luis Obispo County.

The plant, the largest single power station in the Golden State, generates more than 2,200 megawatts of energy to serve northern and central California residents and businesses. It accounts for 10 percent of the state’s electricity output without emitting greenhouse gases.

It, like the San Onofre Nuclear Plant in northern San Diego County, became targets of California’s often complicated web of energy regulations which have ever-increasingly prioritized the purchasing of electricity generated by renewable sources over nuclear reactors or fossil fueled plants.

Yet, the shuttering the plant, slated for 2026 when its second of two permits has expired, comes at its own cost to Californians.

A report by the Union of Concerned Scientists – scientific advocates that supported the shuttering of the plant – found that California’s electricity sector will emit an extra 15.5 million metric tons of emissions tied to the plant’s retirement by California officials.

The direct impact of California’s switch is already being seen amid scorching temperatures.

It’s the combination of soaring electric prices for consumers, drastic increases in emissions to replace the loss of production from the San Luis Obispo County plant, and grid instability from still-developing renewables that have shaken the faith of a growing set of Californians on Capitol Hill.

The Riverside County native spent nearly 30 years leading energy policy initiatives on the Hill in his own right and was a backer of San Onofre and responsible oversight of the plant.

He summed up the current situation that led to Nunes’ bill.

“At a time when Californians are regularly being told they must conserve energy or face rolling blackouts, it is irresponsible to arbitrarily shutdown a safe and carbon-free power plant that provides nearly 10% of California’s energy,” Calvert said.

“Once again, California is barreling down the path of pursuing a progressive policy goal with little regard for reality and the basic needs of its people and businesses. Congress should approve the Clean Energy Protection Act, introduced by my colleague, Rep. Nunes, to ensure Californians have access to reliable, clean, and affordable energy.”