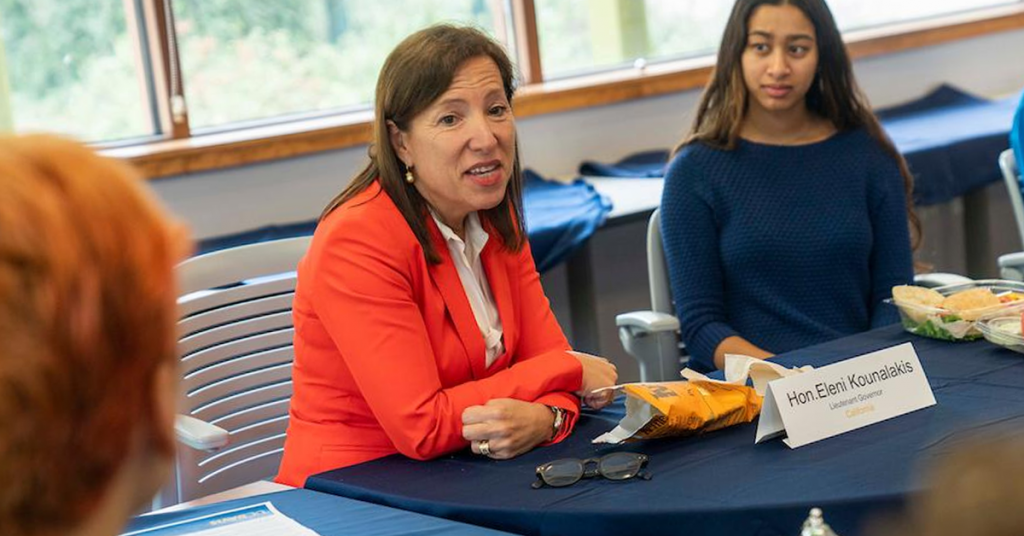 July 2, 2021, 5:45 p.m. – A trade discussion between California business leaders, the state’s Lieutenant Governor, and Turkish business leaders is off following reports that two participants were vehement deniers of the 1915 Armenian Genocide.

The event, organized by the U.S. Chamber of Commerce as part of its U.S.-Turkish Business Council, was set to feature a keynote address from Lt. Governor Eleni Kounalakis and a presentation from the state’s economic development department before a panel discussion.

Zeytinoğlu and Kirlikovali had issued multiple statements denying the 1915 slaughter of 1.5 million ethnic Armenians by the Ottoman Empire as a genocide, a moniker recently recognized by President Joe Biden and the U.S. Congress.

Kounalakis’ attendance was striking, as she – along with Gov. Gavin Newsom and most members of California’s State Legislature – have strongly backed recognition efforts for the Armenian Genocide.

In a statement on Friday, Kounalakis’ spokeswoman said that the state’s second-in-command, along with California GO-Biz officials, and all other California business leaders participating on the panel had withdrawn from the event, forcing a cancellation.

The event and background on two Turkish attendees, in particular, was first reported by The Sun.

In a statement issued to The Sun, Kounalakis said participation ran counter to the state’s values relative to human rights issues.

“I was deeply disturbed to hear that the upcoming U.S.-Turkish Business Council meeting would feature panelists who are Armenian Genocide deniers,” Kounalakis said. “Now and always, California stands strong on the side of truth and justice for this still-unpunished crime.”

Despite the en masse withdrawal of participants, the U.S. Chamber has yet to remove the event listing from its website as of Friday night.

July 2, 2021 · 5:30 a.m. – California’s Lieutenant Governor Eleni Kounalakis, once a diplomat for the Obama administration, is set to walk a diplomatic tightrope of sorts next week in her new role.

The task? A virtual address to top Turkish business leaders to discuss U.S.-Turkish trade next Wednesday.

The tightrope: what else but the Armenian Genocide?

Kounalakis is slated to issue a pre-recorded keynote address to the U.S.-Turkish Business Council, organized by the U.S. Chamber of Commerce, her office told The Sun.

Ayhan Zeytinoğlu, the vice president of Turkey’s Union of Chambers and Commodity Exchanges (the Turkish equivalent of a national chamber of commerce), is set to serve as Turkey’s leading participant in the event.

Along with an overview of the California Governor’s Office of Business and Economic Development (GO-Biz), a panel of California business leaders are set to provide attendees with insights on the state’s climate.

Kirlikovali, an Orange County resident, previously served as the president of the Assembly of Turkish American Associations, a national federation of American-based Turkish cultural associations.

Kirlikovali and Zeytinoğlu have each issued multiple statements denying the Armenian Genocide, a review of their public comments by The Sun found.

In late April, as President Joe Biden formally recognized the Armenian Genocide for the first time since a 1981 address by Ronald Reagan, Kirlikovali shared a website filled with content denying the 1915 mass killing of an estimated 1.5 million Armenians in the Ottoman Empire.

The Turkish business official also issued a striking condemnation of Israel amid an uptick in hostilities between Hamas and the Jewish state.

California, home to an outsized Armenian American population, is among the leading U.S. states on Armenian Genocide recognition and education.

Kounalakis, for her part, has made multiple public statements recognizing the Armenian Genocide.

During a visit to San Francisco’s KZV Armenian School last August, Kounalakis doubled-down on her position.

“California’s political leaders – Governors, Legislators and I – have made it crystal clear that Armenians were the victims of Genocide in the 20th century, and that the violence they suffered must never be inflicted on anyone, ever again,” she said in prepared remarks.

Her appearance at the school came amid hostilities between Armenia, the Armenian-led Nagorno-Karabakh government, and Azerbaijan. Vandals tagged the ethnic Armenian school with slurs.

Kounalakis does not plan on addressing the Armenian Genocide denial of the participants during her presentation next week, her press secretary Katie Hanzlik told The Sun.

“The Lt. Governor will be participating in the event via a pre-recorded video message and will simply be providing welcoming remarks on the topic of business opportunities in California,” Hanzlik said in a statement, adding that the format doesn’t allow for direct engagement.

While Kounalakis is aiming to welcome business opportunities from Turkey, leading lawmakers in the state legislature are seeking to extend economic sanctions on Turkey over its human rights record – beginning with its unwillingness to acknowledge the Armenian Genocide.