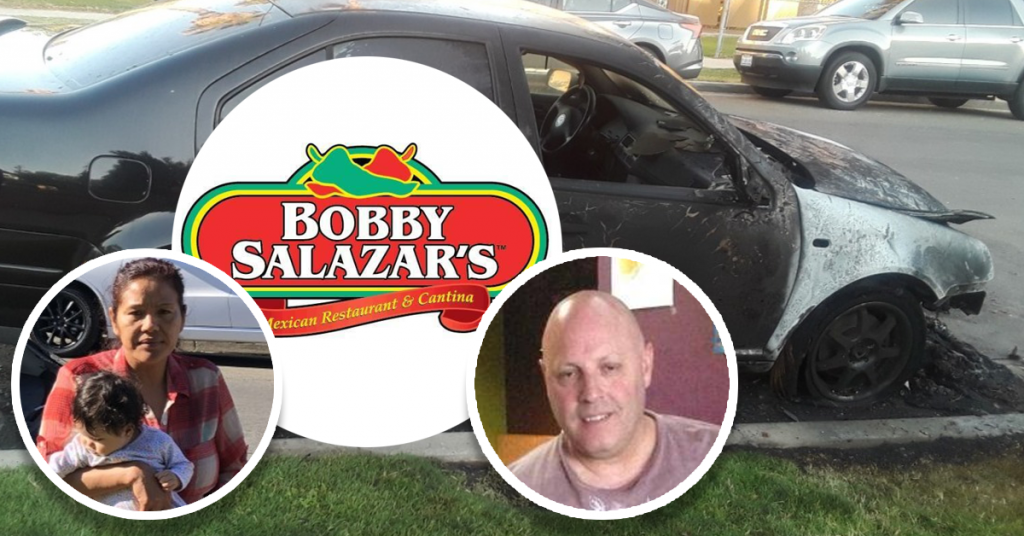 A former employee of Fresno-based Mexican restaurant group Bobby Salazar’s was a victim of car fire-bombings shortly after she filed a wrongful termination and pregnancy discrimination lawsuit.

A Fresno attorney says instances of the alleged attacks are occurring with greater frequency and are likely tied to litigation with the restaurant’s owner.

Restaurant worker Hilda Lopez of Fresno sued Robert “Bobby” Salazar – the owner of the eponymous restaurant – on June 17 alleging that he harassed and discriminated against her because of her pregnancy.

Three cars belonging to Lopez’s family were firebombed in the early morning of June 23, less than a day after Salazar was served with the lawsuit.

“Within 12 hours of the lawsuit being served they were all blown up in front of their house in the middle of the night,” Lopez’s attorney Brian Whelan said.

Whelan said law enforcement, including the Fresno Police Department and the FBI, is investigating the incident.

Lopez was hired as a cook for Bobby Salazar’s Taqueria, located in the Tower District, in July 2019.

Per the lawsuit, Lopez said her requests for breaks and lunch were “met with disapproving responses” by management.

“[Lopez] was told that she should not complain about not getting breaks because she could just eat while she worked and that and that was the trade off for no breaks,” the lawsuit reads.

That situation got worse when she found out she was pregnant during the summer of last year.

Lopez claims that when her pregnancy was “obvious and showing,” Salazar got in her face and aggressively demanded that she work faster and stop “whining about taking breaks.”

“Bobby Salazar raised his voice at [Lopez] and aggressively pointed his finger in [Lopez’s] face demanding that she work faster,” the lawsuit reads.

Lopez said she got the message and stopped asking for breaks because she needed the job. She said her work did not slow down because of the pregnancy.

Following the incident with Salazar, Lopez’s schedule was changed to require her to work on days that she already had family commitments. She said management was cooperative with her scheduling requests before the pregnancy.

Lopez sent the following text message to Salazar on Oct. 3, 2020: “I told you that I can’t work Sundays. I think your [sic] discriminating against me because I’m pregnant but I can do my work better than some people there.”

Matters worsened for Lopez once again, according to the lawsuit.

“Not only were breaks denied, but as a punishment [Lopez] was also sent next door to Lucy’s, another restaurant owned and managed by [Salazar], to clean the bathrooms,” the lawsuit reads.

With her due date set for November, Lopez worked up until Nov. 7, and she claims she was denied the opportunity to return to work after she gave birth.

Lopez is seeking $350,000 in damages to compensate for past and future lost wages and benefits, emotional distress and other injuries.

Not the first firebombing

Last week’s firebombing incident was not the first that involved a former employee of Salazar.

On May 20, 2020, another former employee (who requested anonymity) had her car firebombed after she revealed a pay-for-testimony scheme involving Salazar and another wrongful termination lawsuit that Whelan was working on.

On Aug. 17, 2020, an assailant attempted to firebomb Whelan’s offices.

“Someone threw a Molotov cocktail at my office,” Whelan said.

She worked for about a month until she – along with much of the staff – was furloughed due to the COVID-19 pandemic.

In her declaration, Doe said Salazar approached her offering $500 to offer false testimony against Tovar in his wrongful termination lawsuit. She claimed Salazar wanted her to testify that Tovar tried to sell her drugs.

“Though I never worked with Rodrigo, I had been a regular at Bobby Salazar’s before I began my employment at Bobby Salazar’s. At no point in time did Rodrigo ever sell drugs to me nor to anyone else to my knowledge,” Doe wrote.

“In my experience with Rodrigo, it was and would have been out of character and out of place for Rodrigo and I did not believe Bobby’s claims were true. In my experience, Rodrigo is and has always been an upright, loyal and honest person. When Bobby was asking me to lie under oath about Rodrigo, Bobby had a wad of cash in his hand.”

Salazar, speaking to McClatchy, denied the fiery accusations on Monday

Salazar is no stranger to the criminal justice system. In 1997, he was convicted, by way of a no contest plea, of fraudulently filing an insurance claim after conspiring with an associate to have his car stolen from Selland Arena.

With the Lopez family out of three cars after their destruction, Whelan has set up a GoFundMe campaign to help the family purchase new vehicles.

The family’s cars had basic collision insurance, but the plans did not cover firebombing.

“They don’t have cars now as the result of all this and are in need of assistance,” Whelan said. “I’m trying to ask the community to help them out because they don’t have the resources to buy new cars right now. They don’t have insurance that’s there to cover the loss, so it’s kind of a nightmare of a situation for them.”